Inflation: a large one-off rise on the way

Inflation is back at centre stage. And it looks set to remain there through much of 2017, as a combination of factors push prices higher. This week saw the release of the September inflation data and a rise in the year on year rate of inflation to 1% from 0.6% in August. Although this is a two year high, it is below the two per cent inflation target. Inflation was always likely to rise on an annual basis in September as falls in energy and food prices from earlier last year fell out of the comparison. Sterling's recent depreciation had very little effect on these particular inflation figures, but in coming months the full impact of a weaker pound will feed through.

There have been two main influences on UK inflation in recent years: domestic cost pressures, which have been subdued and are expected to remain so; and the external cost impact. In recent years this latter effect has seen a drag on inflation, keeping it subdued, because of low commodity prices, including food and oil, and a previously firm pound. Now, because of a weaker pound, the UK is likely to be more sensitive to global price pressures, especially from oil prices, which are now rising following OPEC's recent decision to curb supply.

We saw a similar inflation effect in the wake of the 2008 financial crisis when sterling fell 23% and this led to higher input prices and a spike in domestic inflation in 2009. Then, as wage growth was subdued, there was a squeeze on living standards. However, as monetary policy remained accommodative, financial assets stayed attractive, despite inflation. Then the rise in inflation was not sustained. What about now?

It is interesting to note that, speaking in Nottingham on Friday 14th October, the Governor of the Bank of England indicated that monetary policy would tolerate a temporary rise in inflation over the next year without being tightened. That makes sense.

The issue though is how big and how sustained any rise in inflation will be, and what will be the investment implications?

In its quarterly August Inflation Report, the Bank expected input prices inflation to reach 6% in 2017 (Q1) versus 1.3% in 2016 (Q1). Sterling has weakened by about a further ten per cent since then, so the impact will be bigger. Thus the November Inflation Report will be closely analysed.

The feedthrough of inflation varies by sector but in the past has been quickest for food and energy. At the end of the summer, food prices were about 7% below their 2014 peak, so this effect will be reversed over the remainder of this year and into next. Food and non-alcoholic drinks comprise 10% of the consumer price index, with electricity and gas 4%, fuels and lubricants 3%, services 48% and other goods 35%. 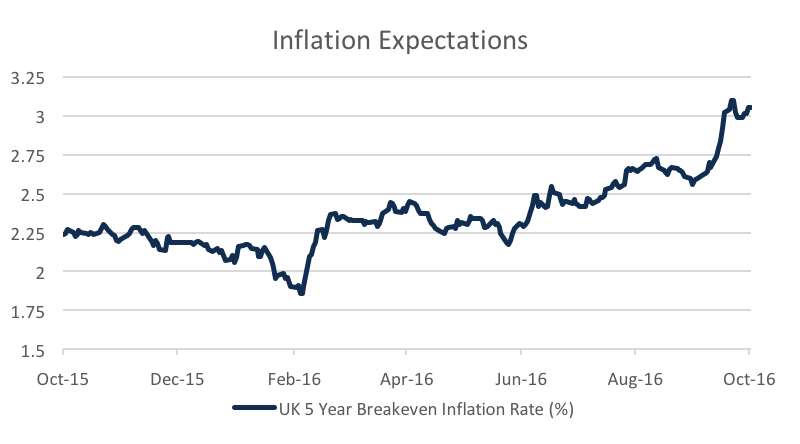 Source: Bloomberg
The five year breakeven inflation rate is defined as the average rate of inflation over the next 5 years that would result in the performance of holding a fixed coupon bond equal to holding an inflation linked bond with the same maturity.

Dollar oil prices had fallen in 2014-15. Oil prices have risen recently, so petrol prices would have risen anyway, without the pound's decline. But again this impact will now be larger. This will feed through into the petrol pump, and will likely force the Chancellor to offset this by not raising petrol duty and even vehicle excise duty in next spring's Budget.

Despite this rise in input costs, service sector inflation may remain low. In fact, the impact on retail prices will depend upon a host of factors, including competition and demand, which in turn are influenced by inflation expectations and wage behaviour. Wage growth has remained subdued across the economy and this remains the case, hovering above 2%.

We should expect people to still remain price sensitive and this may force firms to limit price rises. One possibility is that some firms could absorb any pick-up in costs on their margins, in order to keep prices down and so retain market share. Corporate profit margins are high, rising since after the financial crisis. For instance, across the economy outside of the oil sector they are over 18% of gross trading profits. When the pound collapsed in 2008, such margins fell from just under 18% to around 14% before recovering. The same seems likely now. Alternatively, with employment still high and if the economy were to grow steadily, then higher wage growth may ensue, allowing firms to keep margins high and pass on higher prices. In that case inflation could peak at an even higher level.

Although any squeeze on domestic margins might be seen as negative for UK equities, the reality is that other factors may have a more positive impact. For instance, with 72% of the earnings of the FTSE100 being overseas driven, the currency effect dominates for many. Furthermore, a continuation of an accommodative monetary policy by the Bank of England could be supportive.

The likelihood is that inflation will peak towards the end of next year, perhaps even early in 2018, around 3%. We had already previously anticipated some pick up in inflation, hence diversifying across our portfolios into higher quality assets to reflect this, taking into account the possible impact on gilts. That being said, holding gilts is still a very sensible part of many portfolios, particularly if the Bank of England's assessment of this as a one-off pass through of inflation proves correct. Indeed, we feel markets may be too aggressive in their forward inflation projections. The graph shows the market's five year ahead inflation expectations; these have been stubbornly above the two per cent target this year, and have peaked recently above three per cent. Although an increase in the market's inflation expectations is justified, the market's view of a five year break-even inflation above 3% may be too high. Instead, after rising during 2017 it still seems sensible to expect the 2% inflation target to be viewed as an achievable anchor in the future, and possibly even back in sight during 2018.