What is the state of the British economy?

For some years I have argued about the need for the UK to reposition itself in the global economy. The challenges the UK faces are not new: we don't save enough, we don't invest enough, growth is imbalanced as seen by the current account deficit and the dominance of London and all too often growth has gone hand in hand with too much of an increase in personal or government debt. All these issues will take time as well as the right policies to address, and may become more of a focus of attention as policies are developed in a post Brexit world. At the same time, of course, there are many current areas of strength, as evidenced by the high rate of employment and many innovative parts of the economy. We should expect a greater policy focus on such longer term issues in a post-referendum and pre-Brexit environment. For now though, the immediate issue ahead of the November 23rd Autumn Statement is the present state of the economy. It is also likely to attract attention at the early October IMF meetings in Washington, attended by both the Chancellor and Bank of England Governor.

The preliminary release of economic growth figures for the second quarter, covering the three months of April to June immediately before the referendum, suggested things were not too bad before the EU vote. They showed Gross Domestic Product (GDP) rising 0.7 per cent from the previous quarter. On an annual basis, growth was 2.1 per cent. While GDP figures are in many respects the key economic barometer, they are only one of many snapshots of the economy. Moreover, history shows they can often be subsequently revised sharply, as more information becomes available, with the tendency often being that they are revised upwards. Also, by their very nature, because they cover the whole economy, there are many other higher frequency figures, usually released on a monthly basis, that are more up to date.

These figures show that the post-referendum environment had not led to the economic and financial armageddon that was widely predicted if the country voted to leave the EU, as it duly did. True, confidence did collapse immediately after the referendum result, but since then it has recovered strongly. Other indicators also suggest growth is relatively steady.

It is often difficult to pinpoint one economic indicator as being any more important than another. The recovery in confidence, however, is notable. In addition, the relative robustness of recent monetary growth is also worth noting. This is shown in the first graph below. The latest annual growth of 5.4% per annum may be way below what was evident back in 2007-09 but as the graph indicates, it still represents a significant increase on recent years, consistent with steady economic growth. 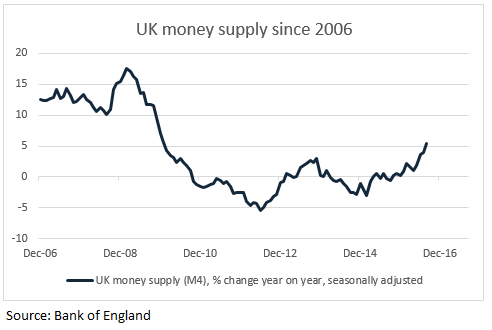 The recent robustness of this and other monthly economic data has raised a few questions, and these are not only relevant for policy makers, businesses and anyone who follows the economy but also are of importance for those thinking about their investment strategy and likely performance.

One vital issue is: what does it mean for interest rates and overall policy? I share the view of the Bank of England Governor Mark Carney that despite the recent data, the Bank was justified in easing policy immediately after the referendum result. The shock reflected in the confidence data may have been overdone, but it was important that the Bank showed it was both prepared and ready to act. Over the last week, the Bank has just started to implement its corporate bond buying operation, which is very supportive of that market.

It always seemed clear that a Leave vote would trigger a fall in both confidence and in the pound, thus forcing the Bank of England to ease policy. Also, we felt that the combination of lower rates and a weaker pound would help growth rebound. It now looks set to be followed by a fiscal stimulus too.

The Bank claims that the quarter point rate cut already delivered will add about £5 billion to the economy alone over a full year, given the amount of variable rate borrowing that exists from both individuals and small and medium-sized firms. This is positive for spending.

My impression is that the Bank still has a bias to ease again if needed, but recent data suggests it does not need to right now. Indeed, I think the most likely scenario is that rates stay unchanged at current low levels for some time.

It seems clear that there are still worries about the commercial property market, although this is less to do with Brexit than the overstretched nature of the property sector and the inappropriate liquidity structure of some investment funds in recent years. Also, business investment is not particularly strong. On top of that, the UK still has a twin deficit problem in terms of its sizeable budget and current account deficits.

The budget deficit may limit the ability of the Chancellor to pump up the economy in his late November Autumn Statement as much as some may wish. Despite this, infrastructure spending is now firmly back on the table. Hinckley Point is going ahead and the media now suggests expansion at Heathrow may get the go ahead as well. What we also might see are plans for future regional spending.

Meanwhile, the current account deficit may weigh on sterling, although the extent of the pound's fall in recent months implies that much bad news has already been discounted.

Given all this, we should not overlook that that the Achilles heel for the economy has often been personal debt and consumer borrowing. All too often people have overstretched themselves, albeit for understandable reasons. Personal debt levels were very high at the time of the crisis but have been moving in the right direction in recent years. Hence, lower interest rates help. Employment numbers have been good, with record numbers in work. This helps debt servicing as well as consumer confidence. But it is wage growth that is vital. The post-crisis world may have seen the economy now experience seven successive years of steady but far from spectacular growth, but wages have not risen significantly. Many workers, after allowing for inflation, have not seen wage gains. And this at a time when inflation has been low.

For the economy to achieve escape velocity, rising wages are needed to help sustain much stronger consumer demand. But one of the key areas both policy makers and investors need to focus on is inflation. It has been low, below the Bank of England's 2 per cent target, but now the question is whether a weaker pound will lead to higher imported inflation pressures. The chart below shows the annual rate of consumer inflation since 2007. The message from this is that while inflation is subdued, it may now be past its low. Hence in my next piece I will focus on the outlook for inflation and its investment implications. For now, while we need to keep our eye on the inflation data, as well as on how UK and global markets are impacted by renewed worries about the banking sector, investors may be reassured by the relative resilience of UK economic data post-referendum. 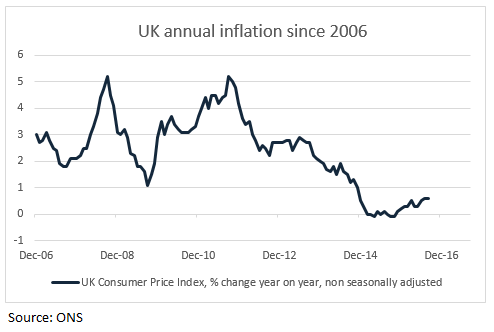