European asset markets breathed a sigh of relief this morning reflecting yesterday’s announcement of the results of the first round of the Presidential election. Equity markets and in particular bank stocks rallied significantly, the euro strengthened and bond spreads narrowed markedly in early trading on Monday as it became evident that a run off between the far-left candidate Mélenchon and Madame Le Pen from the far right wasn’t going to eventualise and the favourite candidate to be elected president is the centrist Emmanuel Macron.


European Assets Have Reacted Favourably on First Round Results 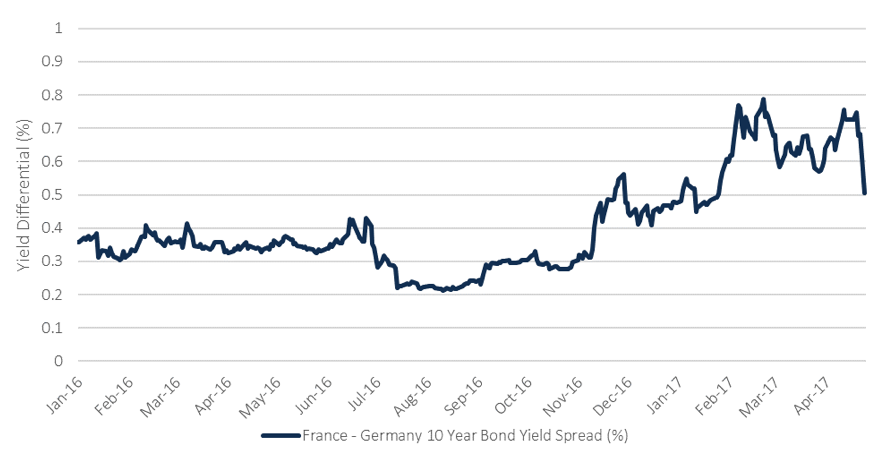 Now, with two weeks before the final vote we focus on the remaining two candidates: Macron and Le Pen and their likelihood of victory.

One encouraging outcome from yesterday’s vote was the accuracy of the polls. In turn this has reassured the markets about the final outcome in two weeks’ time, as the current polls point to a comfortable Macron victory. The chart below shows the evolution of poll results (dots) versus the eventual election outcome (dashed line), indicating there wasn’t much divergence between the final polls and the actual votes received.


Actual 1st Round Results vs. Evolution of Polls

Does this mean we should have 100% faith in the opinion polls for the second round? Of course not – a lot could happen over the next fortnight that could cause voter sentiment to change, for a start Macron’s policy agenda will likely be put under more of a microscope than hitherto. Despite that, current data shows a considerable lead and indicates that he is a strong favourite to be elected.

In particular, the majority of supporters of the main candidates from the first round that didn’t progress have indicated they would vote for Macron rather than Le Pen. Recall that in 2002 Madame Le Pen’s father progressed to the second round with 16.9% of the first round vote, but only garnered 17.8% in round two. From where we are now, Le Pen would need a large shift in sentiment from the eliminated supporters or a remarkably low turnout from Macron supporters to be victorious.

Nevertheless, as we’ve discussed before, regardless of who wins the second round, given the relative size of their political party, the likelihood that either would gain a parliamentary majority is slim and as such cohabitation could ensue. This is where the President and the Prime Minister represent different political parties, and although the President has superior power, this could lead to the risk of obstacles in domestic policy implementation for the eventual victor.

As per previous communication, we will continue to monitor the political situation and the market consequences very closely and will provide further updates as we progress through the electoral cycle.