Without doubt 2018 has been a challenging year for investors, with the majority of major asset classes posting negative returns for the year. We look back at 5 key themes that have influenced markets and highlight topics that we will be focusing on in 2019.


The US – The (market) leader of the free world

Market performance in 2018 has seen a reversion to more ‘normal’ behaviour of rallies and falls, with many investors recalibrating their expectations after being de-sensitised by a lack of sharp market moves in the year before. One way in which 2018 was unusual was the extent of US ‘exceptionalism’ in the first nine months of the year. Driven by low (and falling) unemployment and pro-cyclical, pro-business fiscal policy, there was across the board improvement in the US economy, with upward moves in wages, consumer confidence, housing prices and rents, corporate profits, and share prices. This good news led the Federal Reserve to drive borrowing rates higher and importantly the US dollar also rallied. The combination of rising US rates and a stronger dollar triggered problems for some overly exposed emerging economies, a recurring theme throughout the year, with Argentina and Turkey most vulnerable. This, in turn, reinforced the attraction of the US and exposed a wider problem, that growth and confidence in the rest of the world was at best subdued, at worst flailing. European economies, which had suffered setbacks from bad weather early in the year, failed to rebound as the year progressed. All this led to marked out-performance of the US equity market compared to all other leading indices before the recent correction.


Year to date performance of US Equities compared to other markets 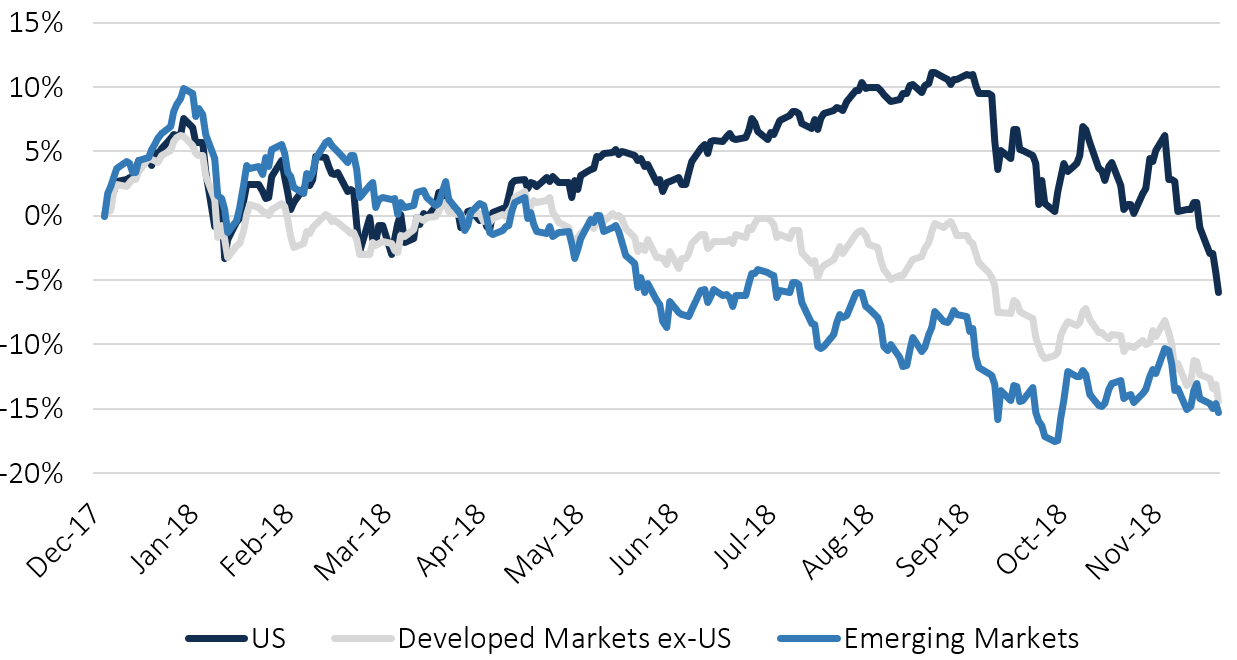 Technology stocks – strong momentum but what about value?

In addition to a strong macroeconomic tailwind in the first half of the year, the performance of the US equity market was bolstered by its sizable allocation to technology stocks. Unlike the tech boom 1.0 at the turn of the century, version 2.0 of the past few years has been driven by the delivery of strong and sustained profit growth – against a profile of less exciting earnings expectations in other regions and sectors. It was no surprise therefore, that investors looking for more traditional value stocks have focused their efforts elsewhere – but they have been mostly disappointed by the ongoing challenges within banks, retailers and resources, across a host of countries. There are compelling reasons for the durability of technology outperformance – especially as its influence continues to disrupt other sectors so ruthlessly. Cynics may well see risks that are not yet being priced in to the profiles of these technology behemoths’ future earnings growth – not least questions over transparency and regulation, international tax environments, or the simple ability to withstand new competition. At some point, some of the more beaten-up parts of the market will get some good news. 2018 looks likely to be the 10th year of the last 12 that a global ‘value’ style has underperformed ‘growth’ – so perhaps 2019 could see value reconverge? 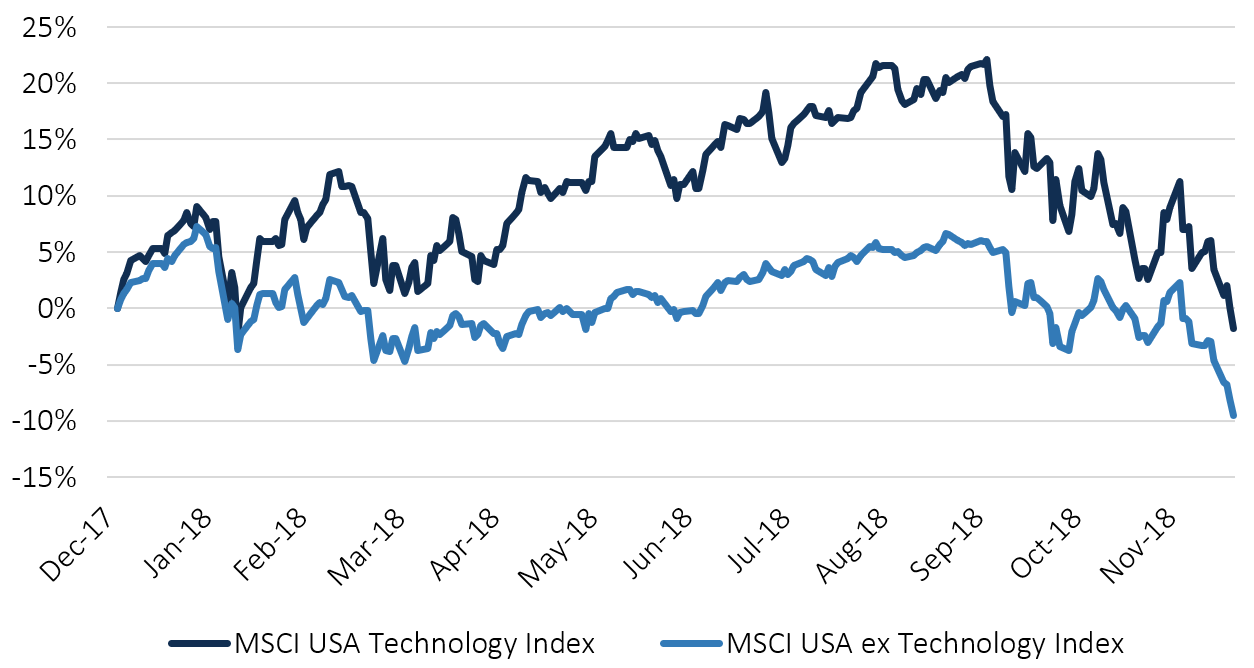 No inflation and falling liquidity

Inflation is never far from the mind of markets. 2018 has been no different, with many investors anticipating strong global activity would prompt price increases. Instead, headline inflation rates in the US and elsewhere have remained subdued, in part due to the dampening effect of falling commodity prices. Economists are more concerned with the potential for the pass-through of rising wages to lift the ‘core’ basket of goods prices (excluding the more volatile numbers from food and energy) in the coming years, offsetting the structural disinflationary forces of technological advances and globalisation. Along with a focus on monetary policy normalisaton this has contributed to the upward pressure on bond yields for much of the year. Equity markets have stumbled since October, with US stocks finally re-pricing for the impact of higher borrowing rates. As financial conditions have tightened, expectations for future inflation in the US have also fallen sharply, in step with lower oil prices and a less exciting growth outlook, and they are now as low as they have been since President Trump’s election. Meanwhile, the UK has been an outlier here – as inflation is expected to tick slightly higher reflecting weak productivity and higher import prices as a result of sterling weakness. This means the difference in expectations between the UK and US is as wide as it has been for a long time, and could influence much of policy and market returns in the coming years.


Comparison of inflation expectations in the US and UK

The lows and (relative) highs of Emerging Markets

We wrote in early October about the travails facing Emerging Markets (EMs) in fixed income and equities. Many of these less mature markets had seen volatility a lot earlier in 2018 than their more established counterparts – and the wires and business pages were full of talk of a crisis provoked by draining US dollar liquidity. Cyclical sectors sensitive to the global trade environment have certainly been impacted by a deceleration in global export volumes, but we felt the relative falls in valuation at that point belied EMs’ ongoing ability to generate competitive returns on shareholders’ equity. The potential for Sino-US trade conflict to do longstanding damage to the growth prospects of the Emerging Markets is clear, and idiosyncratic country risk will always be a feature of investing here, but cheaper valuations have already created a cushion against further volatility, and it has been interesting to see EM outperforming other regions in the challenging environment of the last three months. 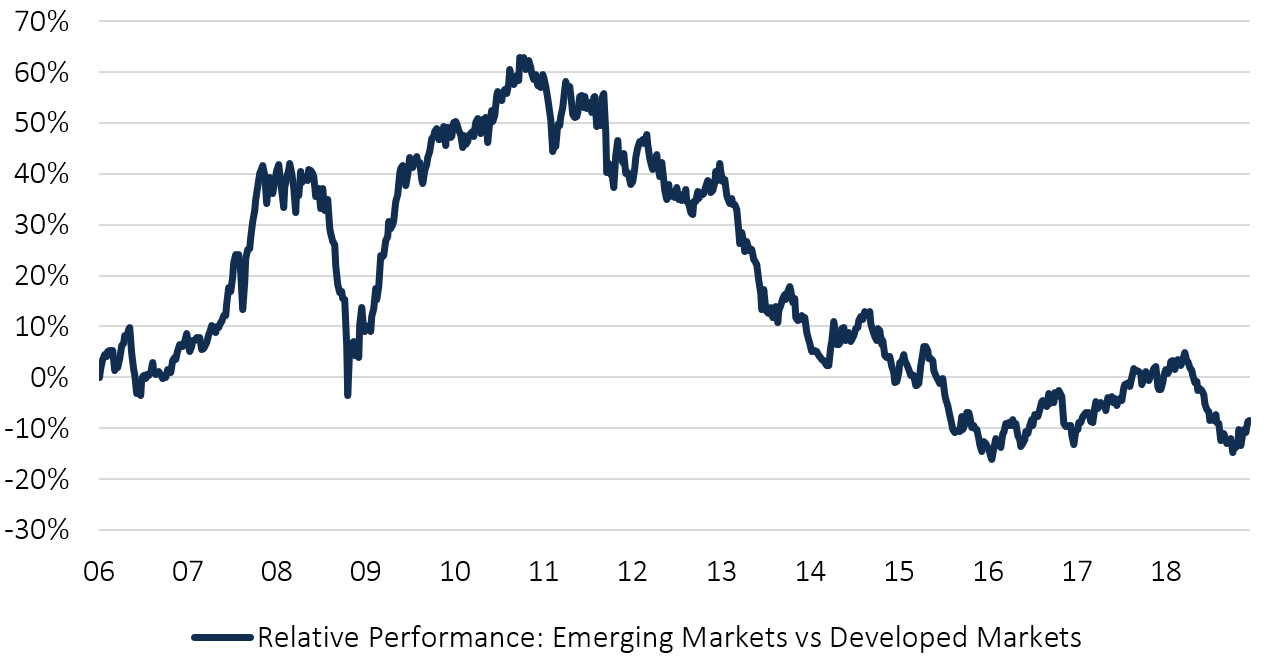 In the UK markets, Brexit has been everything

There has been no hiding from Brexit in the UK in 2018. Markets have demanded a higher premium for political risk on UK assets, most visibly in the currency. However, equities have also been marked down and stocks with a domestic focus have notably underperformed those with more of an international flavour. One area relatively unscathed is the yield curve of the government bond market, where yields have been anchored by the Bank of England at the short end, and by the market’s perception of Brexit as a growth concern rather than a national credit risk for longer-dated debt.

Raw politics has taken centre stage and thus the ultimate destination of Brexit is still unclear. While that remains the case, we expect that markets will price UK assets cheaply. However, with a lot of uncertainty already discounted, risks now appear more balanced, hence our decision in the fourth quarter to increase portfolio exposure to domestic mid-cap stocks, and slightly away from the US dollar-influenced FTSE 100 Index. Brexit is likely to dominate UK news flow for some time, but within a globally-diversified portfolio, gains from any progress could provide some welcome cheer in the new year. 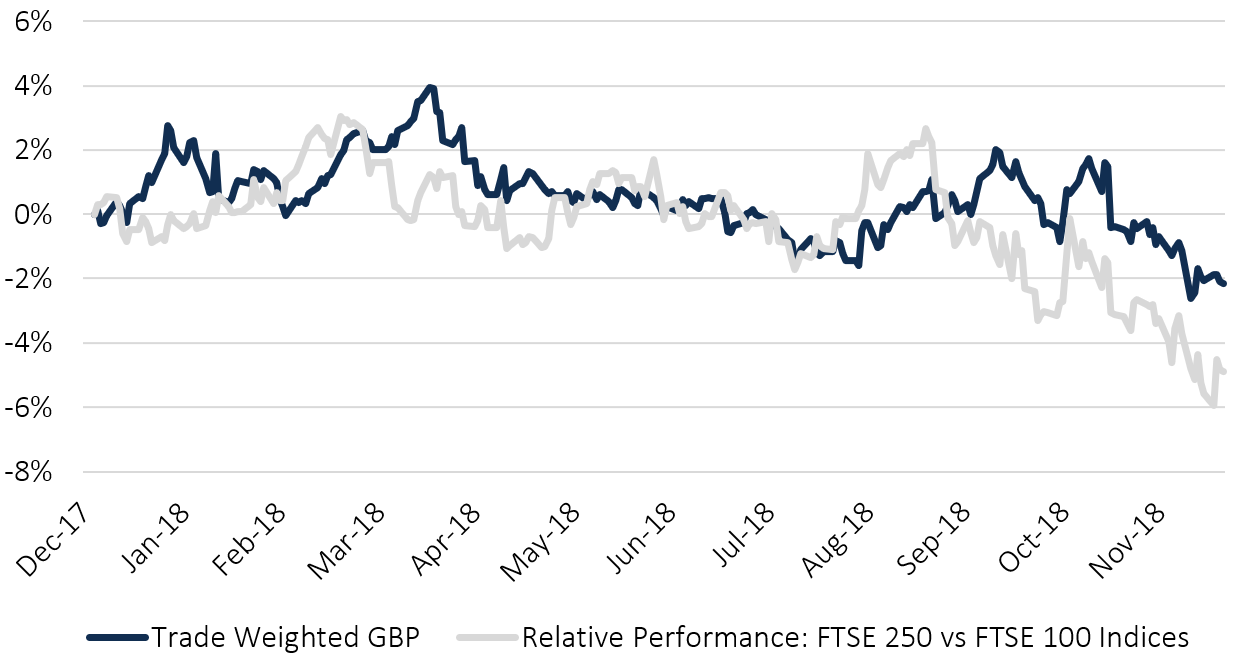 The rising cost of money in the US has prompted much more talk of recession there, as shown by the Google Trends chart, below. Without doubt, the macroeconomic environment in the US has been benign for a long time, but as the cliché goes, cycles don’t die of old age. At 3.7%, US unemployment has rarely been lower, consumer confidence is still riding high, and the housing market is healthy. Every US recession of the past 50 years has been predated by an energy shock, which is in contrast to the current stumbling price of oil. It is natural to expect activity to slow from this strong starting point, highlighted by signals such as the flattening yield curve. Talk of anything beyond the chance of a technical two-quarter slowdown in the US seems premature. That said, the rising wage bills from an increasingly confident working population seem certain to eat into corporate profits before that point, leading to lower risk-adjusted returns in the future than recent history.

Like any central bank, the Federal Reserve is trying to maintain a healthy balance between economic stability and inflation. Nine interest rate hikes into their cycle, the Fed’s job is all the harder as it has the additional burden of what this does to the global outlook as well as to domestic activity. Gerard Lyons often refers to the importance of ‘sequencing’ as well as ‘scale’ of monetary policy tightening as central banks seek to return policy to what they perceive as normal. Many parts of the rest of the world are still not yet ready for tighter financial conditions, which is why other key central banks still set rock bottom policy rates. Even 10 year bonds issued by Germany, Japan and Switzerland only yield between -0.28% to +0.22%, which is hardly suggestive of a healthy outlook for growth. So the de-stabilising quantitative tightening and higher rates in the US are most unwelcome in these regions, not to mention those Emerging Market countries still facing large external financing requirements. Although Fed Chairperson Jerome Powell has been decidedly more inward-looking than his immediate predecessors, one imagines that he will be hoping the rest of the world catches up with the US, before the US ‘catches down’ with them. Although markets will recognise, too, that by hiking rates sooner, the US has more ammunition than others to ease rates, should that prove necessary.


Yield spread between US and German 2 year bonds 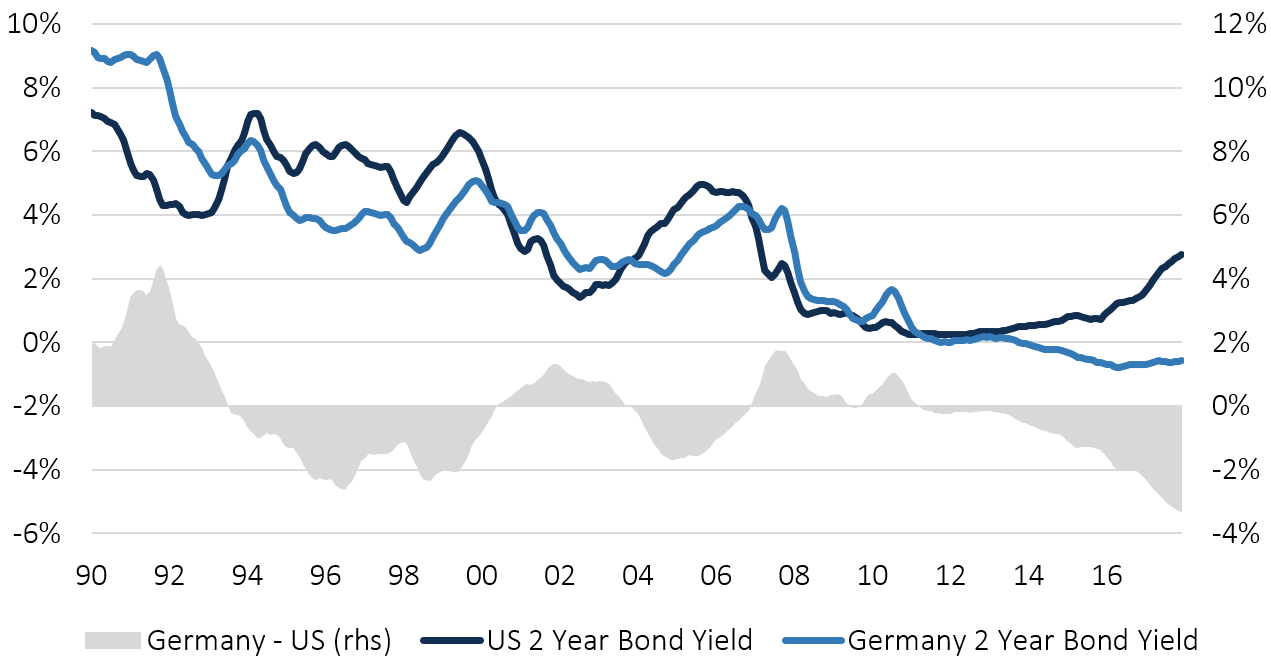 Equity and corporate bond markets have faced significant selling pressure since the US stock market peaked in late September, with volatility rising in key derivatives markets. Equity valuations are now more supportive, but softer fundamental data as well as weaker confidence remain a cause for concern. The number of companies beating earnings estimates in the near term future may also fall. Given that spreads on existing corporate bonds have been widening, and the primary market for new issues drying up, executives in the US may think twice before issuing bonds to fund stock buybacks, which has been a popular strategy to juice up the earnings per share metric in their compensation plans. However, some derivative markets offer better news for stock prices. The options markets for US share prices are starting to show an unusually strong preference for protection against further market falls versus those looking for more upside performance, and the ratio of ‘bullish’ vs ‘bearish’ retail investors has hit multi-year lows. Both of these have been known historically to be contrarian indicators of future performance when placed at extremes. 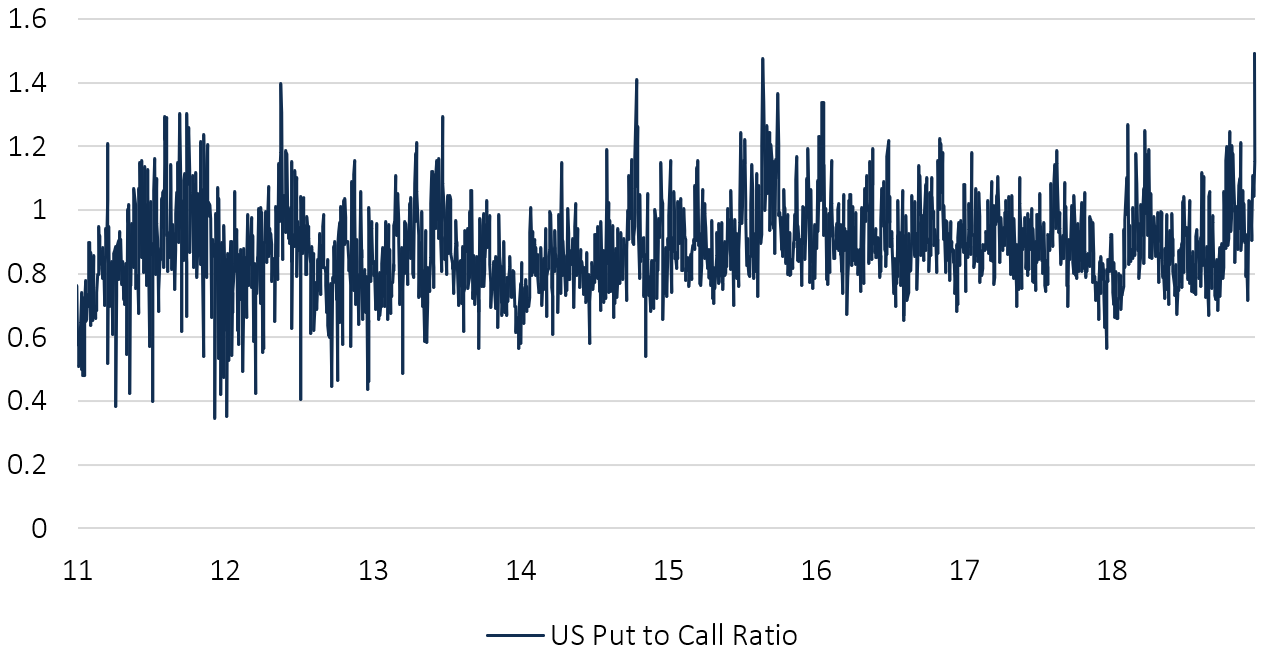 In many ways Japan has led the way for the rest of the world in market cycles. It witnessed a huge boom and bust a decade ahead of other developed economies. Faced with an ageing population, Japan had also already anchored its interest rates close to 0% to spur inflation and growth before the Global Financial Crisis hit home.

From a cyclical point of view, Japan still trails other leading economies and we expect only muted growth in the coming year, not least as it will be caught in the crosswinds of further Sino-US trade disputes. A further challenge will be the implementation of a consumption tax hike in October 2019. Nevertheless, the market offers good value across several metrics when compared to global peers. While this is not new, the improvement of Japanese companies’ ability to generate competitive returns on equity is new – and has been triggered by productivity gains from capital expenditure and widespread corporate governance reform. Then there is the yen, which usually dampens volatility in periods of stress, adding up to an attractive component for portfolios for the year ahead.