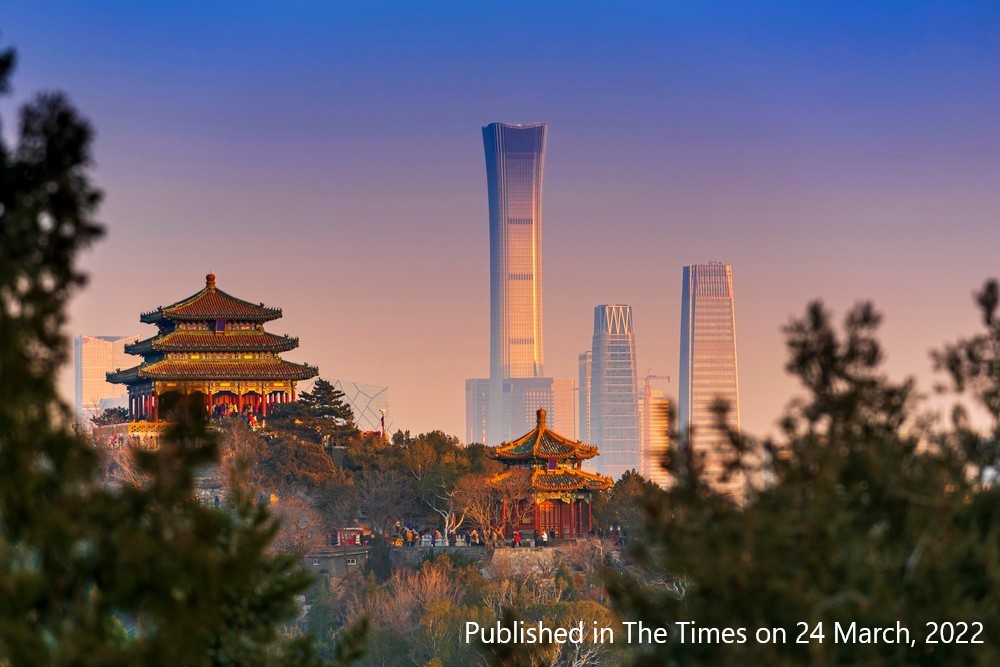 The war in Ukraine is having economic reverberations around the globe. China has come under increased scrutiny.

China is at a different stage of the economic cycle to other major economies. Last year policy was tight as it moved away from debt fuelled growth. Now it has scope to ease policy to hit this year’s challenging 5.5% growth target and keep inflation below 3%.

Its economic trend is up, but China needs to brace for greater volatility. It is more integrated with the global system and more exposed to external shocks. And it faces the increased difficulty of running from the centre an economy far bigger than before.

Within China, war in Ukraine is seen as a vindication of its shift to a ‘dual circulation’ economic policy in the wake of President Trump’s trade dispute. Central to this, China sought self-sufficiency in food, technology and energy; areas where it was too dependent on imports. Equally, it aimed to boost domestic consumption and move up the value curve.

The Central Committee acknowledges the market mechanism needs to play a greater role in the allocation of land, labour, capital and technology. Also, the aim is to deepen and broaden capital markets. Yet state owned enterprises remain critical.

The war also heralds a renewed focus on China’s great decoupling. This could take the approach of one world, two systems to mirror the geopolitical shift towards a G2 world. But China seems keen on a multilateral system not dominated by the dollar and where the yuan plays a greater role, and on a payments system independent of the West.

Russia’s exclusion from international capital markets may see it turn to China. Yet, while Sino-Russian relations took a closer step recently, economically China sees such ties as independent of, not as a replacement to, increased ties elsewhere. After all, China’s global trade importance is rising.

Significantly, the initial market reaction to the war was to view the yuan as a safe-haven currency. This is a game changer and opportunity for China. Admittedly, outflows and Omicron worries have halted its rise – but it remains firm.

Previously the US criticised China’s competitive currency policy. Now a firm yuan fits with China’s policy shift. It also reflects the desire to internationalise the yuan, with it used more in global transactions and as a reserve and funding currency. Yet opening up fully the capital account is some way off.

New global trade corridors reflect the importance of the Indo Pacific, with the US and China dominant. If the yuan is seen as a store of value – underpinned by a central bank keeping inflation in check – this reinforces its attraction.

The next step for China is to boost liquidity in non-dollar markets. It has established more swap lines with other countries and more Asian currencies track the yuan. The political reaction of many emerging economies to the war might also reflect the economics of a changing world order.

The West’s decision to limit the Russian central bank’s access to its foreign exchange reserves was significant, akin to crossing the Rubicon. China, though, may be wary of a system driven by Western politics.

A global race to develop new central bank digital currencies is underway. China’s e-CNY digital currency, already being piloted, is well advanced, while at home it needs to compete with WeChat Pay and Alipay.

There has been an evolution in China’s thinking. The Belt Road Initiative led to accusations of financial colonialism. Now, development banks may take more of a lead.

While the West’s response to the war has been unifying, Russia is not an economic superpower. China is. Reducing future economic and business ties between the West and China is not the way to reduce potential areas of conflict and should not be the approach.

Importantly, the great decoupling towards a new financial architecture may have begun.