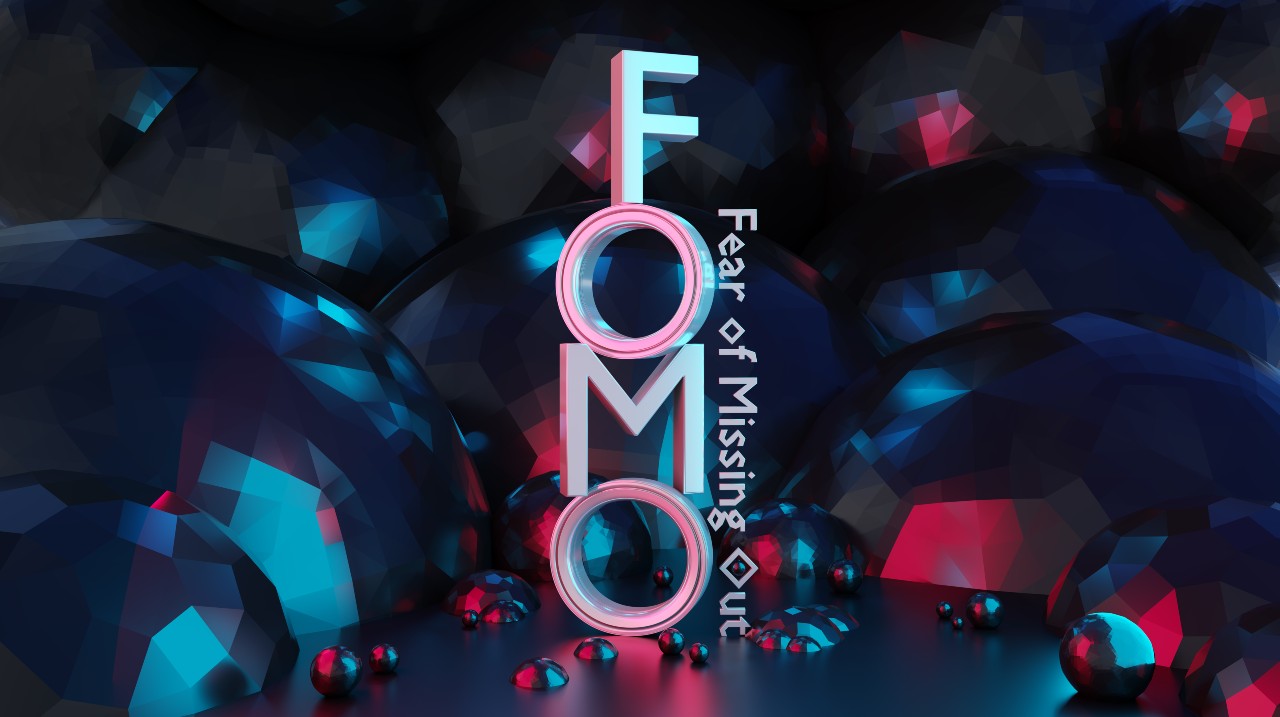 Don’t Fear Missing Out (or Being Invested)

Nobody wants to feel left out. This is as true for party invites and being selected as a company partner as it is for must-have Christmas gift hysteria – everyone wants to feel included. It’s a valid part of our instinct as social animals.

This emotive longing can elevate to a higher level to produce a state known as ‘fear of missing out’. FOMO may also be described – if you’re not in any great hurry – as “pervasive apprehension that others might be having rewarding experiences from which one is absent”. While its effects are amplified by online jostling for attention, FOMO is much more than a catchy acronym for the digital chatterati era.

The real anxiety that FOMO causes is becoming more and more acknowledged and studied, especially its influence among heavy social media users – for example, in this study for the International Journal of Environmental Research and Public Health.

Its impacts can also have serious consequences for investors.

When returns from many assets are muted – in bonds, cash deposits and the overall stock market – it is not unusual for a frenzy to occur behind certain assets or other potential investments.

Feeling troubled by missing out on gains from soaring stocks is bad enough, but what is potentially more damaging is if you then act but are late to the party. This is because many asset bubbles have a nasty habit of popping: look at the many consequential reversals of Bitcoin – three peak-to-trough drawdowns of 80%¹ – at the high-flying companies that went broke after the Dotcom collapse and last year, Hertz (highly traded when essentially bust) and electric truck maker Nikola (no sales, no trucks on the road).

Recent events have raised the FOMO stakes to a new level. The profile of loss-making US retailer GameStop rocketed – to the stratospheric heights of the evening news – when legions of social-media-savvy investors bought the stock, supposedly to dish out vengeance to hedge funds which had shorted the company. (The lure of making some easy cash no doubt played a part, too.)

While the ins and outs of the rationale and the methodology have been covered extensively – and documented succinctly in John Authers’ Bloomberg column – the upshot is that the GameStop share price roared from around $17 in early January to $483 on 28 January, before crashing to under $50 the following week.

We should therefore be wary of investing too much in trends with excessive momentum without enough fundamental support. For example, Tesla’s stock has risen by over 850% since the start of 2020, and even if the company goes from strength to strength, it’s not unreasonable to question whether new investors will see such returns from today’s starting point.

Buying Tesla at current levels suggests not only that electric vehicles in their current form will dominate the auto industry for decades to come, but also that Tesla will forever be the dominant force in the sector.

Source: Bloomberg with Netwealth calculations. Values as of 11 February 2021

Recently US market returns have been dominated by the so-called FAANGs, technology giants who have delivered impressive earnings growth in a lacklustre economic environment. The original Dotcom boom however can teach us some important lessons about buying promising business models on extreme valuations. Amazon, Microsoft and Cisco were all part of that market boom and bust.

Even though all three have maintained dominant positions in their industries, looking at the total returns from their respective share price peaks at the turn of the century show how long it can take to recover after FOMO has taken hold. It took Amazon nearly 10 years to recover losses, Microsoft 15 years and Cisco is still not there, more than 20 years later.

This FOMO frenzy is also frequently evident in the Initial Public Offering (IPO) market. Professor Jay Ritter from the University of Florida (who maintains perhaps the most comprehensive database of IPO statistics) said in December 2020 that “some 80% of companies that went public this year were unprofitable in the 12 months prior to the IPO”. Perhaps more pointedly is that from 1975 to 2011 more than 60% of IPOs had negative absolute returns after five years.

Reasons to be careful

While the results of FOMO are clear enough (anxiety, often fomenting irrational behaviour) the causes of it are less quantifiable. As it is socially driven, it is thought to be related to social proof – where the spell of herd behaviour also lurks – and our tendency to switch into automatic pilot mode when we observe the actions of others.

As Professor of Psychology and author Robert Cialdini puts it, “Social proof is most powerful for those who feel unfamiliar or unsure in a specific situation and who, consequently, must look outside of themselves for evidence of how best to behave”.

FOMO may also be related to scarcity, and the feeling we must act quickly for fear we may lose out. With investing that could be the chance to turn a decent profit by buying an asset at a good price. The availability heuristic may come into play, too, whereby people make judgments about the likelihood of an event based on how easily an example, instance, or case comes to mind. If an investment is prominent, we may think it is a good idea based on its popularity alone.

Reduced barriers to investing quickly – without appropriate analysis – through trading platforms such as Robinhood and eToro may also heighten the sense of missing out. The precise drivers of FOMO, therefore, are likely to be a melting pot of factors building up heat among investors. While nobody can say for sure what ignites the fever, it doesn’t stop the temperature from rising.

What can you do?

FOMO is manifested by its grip on our feelings, and anxiety is often acutely felt. As asset prices soar, our resistance plummets. Recognising that you may feel troubled by missing out on an investment climbing is therefore a necessary step to try and counteract its effects.

What’s the solution? You may take comfort from the fact that markets broadly tend to rise over time (even if not as smoothly as you would like). And you should also remind yourself that many investors who get fired up about the latest hot asset are often burned by the same asset. Paying less attention to the investment bustle on social media is likely to calm your nerves, too.

What you shouldn’t do, however, is to be deterred from investing at all – especially if you have long-term financial goals you would like to achieve. The effects of sitting on the sidelines and even mild inflation on your cash holdings can be substantial.

The key to dealing with FOMO, then, is to strike a balance between irrational exuberance and detached non-participation.

Many investors turn to a wealth manager like Netwealth to help them negotiate the various biases we all encounter, and to actively make investment decisions for them – or if it is more beneficial, to decide not to act at all.

That way, you don’t miss out – while reaping the benefits of reining your emotions in.