Fears of a slowdown in the world economy have resurfaced during the first few months of this year. The signs of a slowdown are, as yet, tentative, and not evident in the bulk of the global data, but they need to be monitored closely. Some recent economic indicators in Germany and the UK have been soft, and the rate of monetary growth in the euro area and the US has also slowed – possibly, but not categorically suggesting weaker growth may lie ahead.

A combination of factors, including trade worries between the US and China, geopolitical tensions in the Middle East pushing oil prices higher, the volatility and apparent vulnerability of financial markets and the increased focus on tighter monetary policies have all taken their toll, at various times, and to differing degrees over the last few months.

From shock absorber to shock creator

In the UK, meanwhile, economic growth was clearly impacted in the first quarter of the year by the unseasonal bad weather, which dented construction as well as hitting retail and leisure spending. To this may be added the uncertainty associated with Brexit, plus hardy perennials such as sluggish bank lending to firms and the continued low level of UK investment, combining to produce sluggish first quarter economic growth. As a result, the economy may have slowed – temporarily – to grow around 0.2% to 0.3% in the first quarter of 2018, below the 0.4% seen in the last three months of 2017. But a rebound is likely in the second quarter.

For much of the last eighteen months we have taken an upbeat view of the world economy, justified by the data. The sustainability of this pick-up depends upon many factors, not least the policy environment. Monetary policy, in particular, has provided a huge stimulus with low rates and large scale printing of money by central banks.

The concern we have raised in recent months is about the sustainability of this global growth when monetary policy is tightened. Having been a shock absorber for the world economy, it is important that monetary policy does not now become a shock creator – and this could happen if it is tightened too aggressively or unpredictably. However, it remains our view that policy changes will be gradual and clearly communicated in advance.

In this environment, investors and savers, as well as others in the financial markets, will be focusing on a number of variables. The outlook depends upon the interaction between the economic fundamentals, policy and confidence.

Last week I participated in two events in London, both of which gave a flavour of the mood across the world, among policy makers and financial market participants. At a gathering of the Official Monetary Financial Institutions Forum, my main takeaway was that this international gathering was very positive about the world economy now, but nervous about what lay ahead. The main concern was one that was heard frequently a year or so ago, namely that if the world economy slows, or falls into recession, there would be little that policy makers could then do to help – as interest rates are already too low and government debt levels too high. Thus, the feeling was that central banks needed to get rates higher to give them room to ease if needed.

The dilemma, you might ask, is whether the world economy could cope with higher interest rates? Well, that is not a current problem in the US. There, economic data has been solid. Moreover, President Trump’s tax cuts are viewed as being “pro-cyclical”, taking place when the economy does not need a boost. Thus, the Federal Reserve is not only raising rates, as we are seeing, but looks set to tighten further. This has already created a more challenging environment for US markets, compounded by issues over data privacy facing technology stocks.

In the euro area, meanwhile, some recent indicators, particularly in Germany, have been soft. Whether this is temporary, due to the country’s political stalemate at the start of the year, is unclear.

One concern we have alluded to is the possibility of a slowdown in monetary growth – across a number of countries. The monetary aggregates, which measure the amount of money in circulation, have somewhat gone out of fashion with central bankers. Indeed, in a previous piece on this site I pointed out how the monetary aggregates have not registered a mention in recent quarterly Inflation Reports from the Bank of England. But it may, at a time of planned policy tightening, be worth keeping an eye on the monetary aggregates.

Quantitative easing, or the printing of money, as it has been referred to, has helped boost asset markets in recent years. The counterpart to this has been an expansion of the balance sheets of the central banks. If the central banks were to shrink their balance sheets – as the markets expect – then this could have a deflationary impact, signalled through a reduction in the growth of the money supply. For instance, as the graph below shows, the European Central Bank’s M3 monetary measure has just seen a noticeable dip in its annual rate of growth, having grown steadily around 5% in recent years – a point highlighted by economist Tim Congdon of the Institute of International Monetary Research. 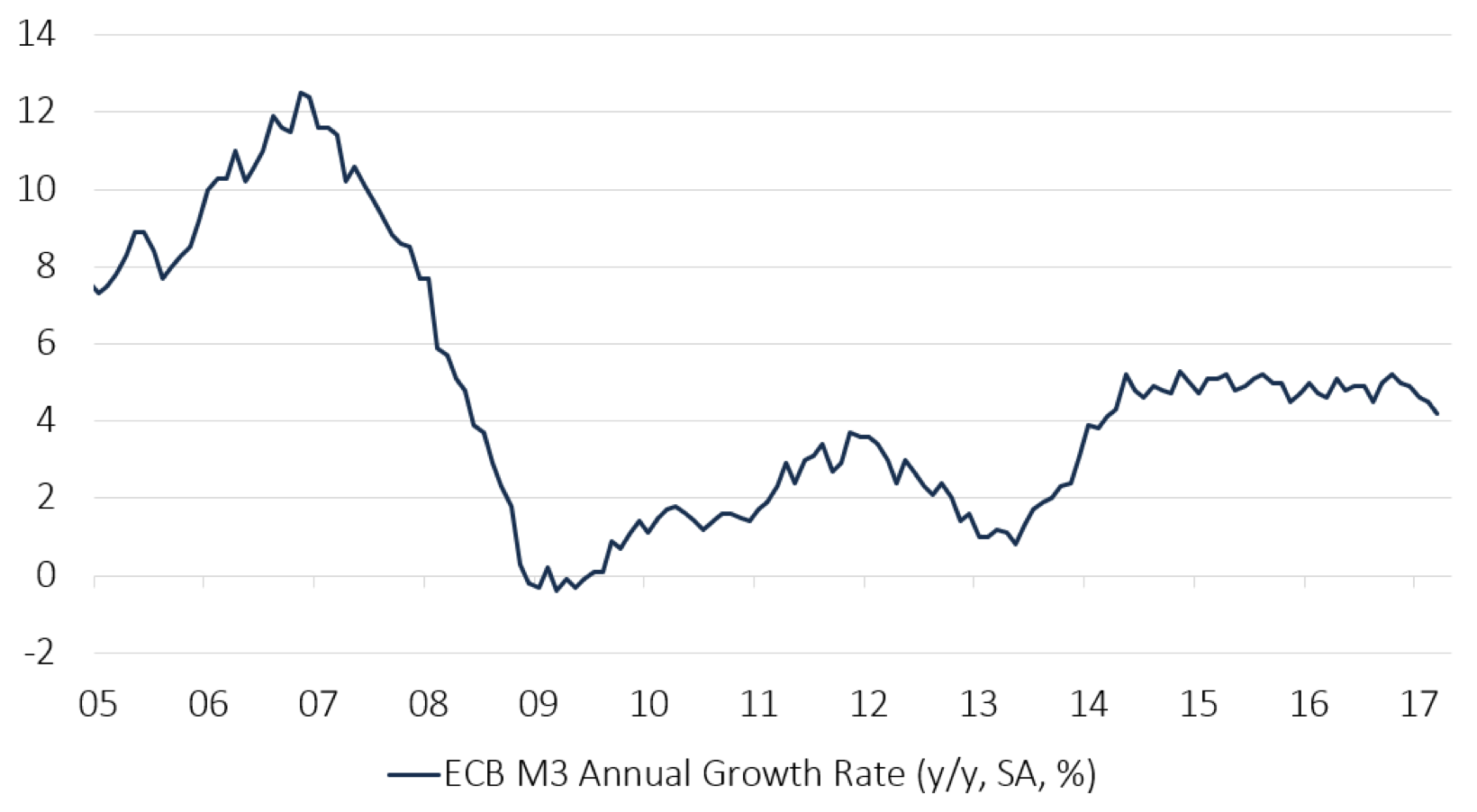 It is not just the western economies we need to monitor, but global developments, too. Last week I also attended in London the release of the new economic outlook for Asia by the Asian Development Bank (ADB). They see 60% of global growth coming from Asia this year and next. Japan is expected to grow 1.4% this year and 1.0% next but the ADB’s main focus was on the other 45 countries across the region. These are referred to as “developing Asia” and are expected to grow 6% in 2018 and 5.9% in 2019. This is not too dissimilar to the 6.1% seen last year when, according to the ADB, Asia enjoyed a “synchronised resurgence in 2017”. Export growth is expected to be strong in the first half of this year, and then slow, but perhaps more importantly for the global outlook, domestic demand is expected to be the main driver of economic growth across Asia.

Noteworthy is that the shift in China from export-led to domestically driven growth continues: consumer spending is expected to account for 60% of growth in China this year. This was evident in official data released earlier this week that showed China grew 6.8% in the first three months of this year, above the government’s 6.5% target.

The ADB, meanwhile, expects India to be the fastest growing large economy, accelerating slightly in 2018 and 2019. Inflation, however, is expected to rise across Asia from 2.3% last year to 2.9% for this year and next. While there are always risks, one message was that, “Improved fiscal and financial positions bolster developing Asia’s resilience to shocks.”

So, the message is solid growth across Asia – and a big and growing market for western economies and companies to sell into. Asia’s growth will also help global growth. It may add to the attraction of emerging markets for global investors.

Much to consider for markets

There is much for the financial markets to focus on in coming months. The International Monetary Fund (IMF) has just released its latest view of the world economy to coincide with its half-yearly meeting in Washington. They have kept with the upbeat forecasts they announced in January, seeing global growth of 3.9% both this year and next, versus 3.8% in 2017 and 3.2% in 2016, but they warned that they are watching closely the same downside challenges to growth that we mentioned at the beginning of this piece.

For the markets, too, the current geopolitical focus on the Middle East will be joined again by a focus on North Korea in coming weeks. Also, there is the next phase of the trade dispute between China and the US. And, of course, the next round of the Brexit talks, too.

Interestingly, in this environment of heightened risks, sterling has rallied – both versus the dollar and on its trade weighted basis (of which the euro is a large component). 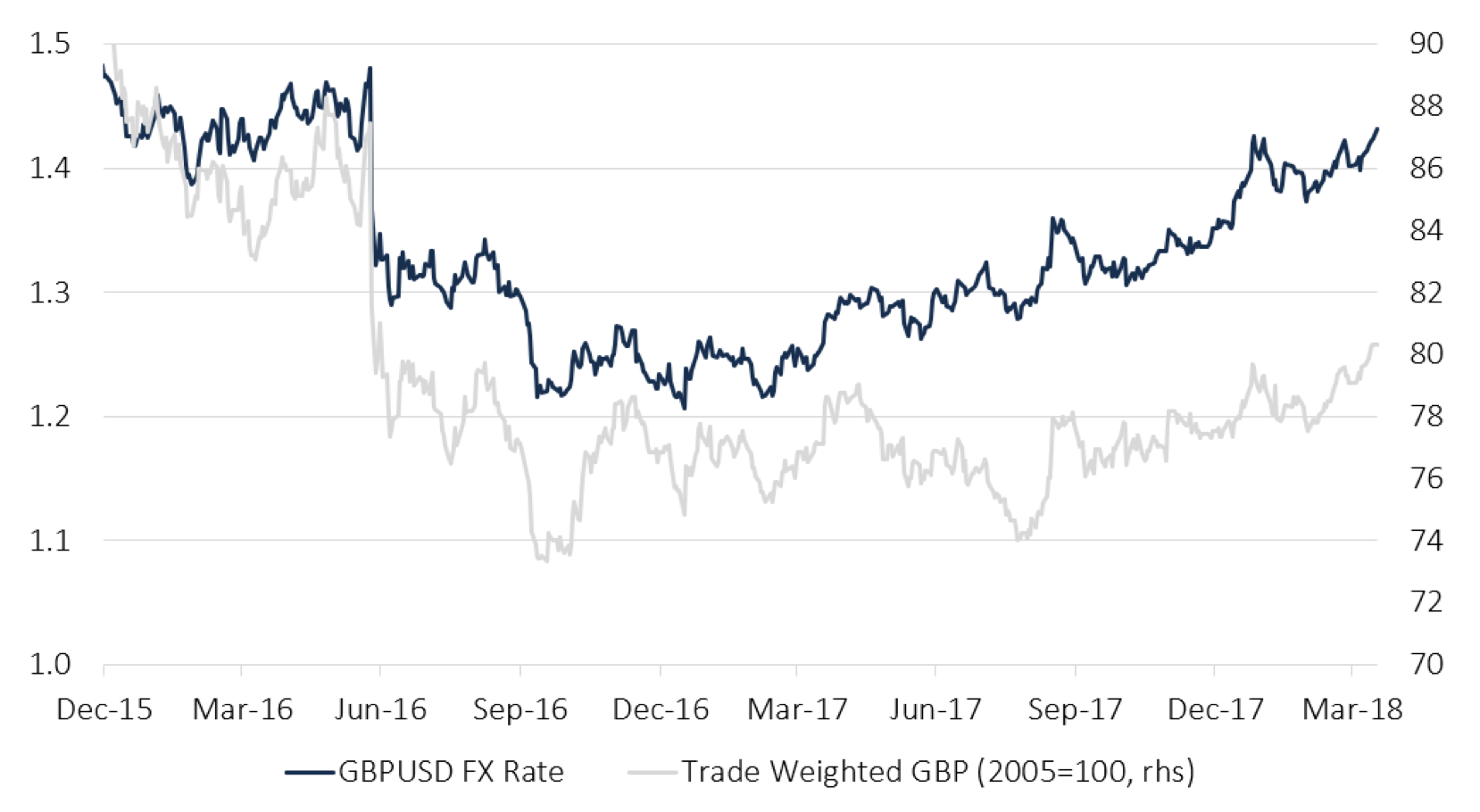 If this continues, it will reinforce the downward trend of inflation that is already underway, but it could unwind some of the positive news seen on export growth. This will add to the conflicting challenges on the Bank of England as it contemplates raising interest rates again in coming months. That being said, a rate hike in May still seems likely.

Data this week showed UK wage growth (2.8% annual rate, excluding bonus payments) outstripping annual inflation for the first time since early last year. This trend looks set to continue, underpinning spending. Annual inflation decelerated to 2.5% in March, in line with our view that it will ease significantly during this year, and help push UK economic growth towards 2%, in excess of current market expectations.

Overall, global growth has been solid over the last year. Neither an acceleration or a collapse looks imminent. The primary question is whether growth will consolidate or slow in the face of trade and geopolitical risks and the desire of central banks to normalise monetary policy and consequentially whether corporations can deliver or beat their earnings expectations, giving support to equity markets. While it is vital to monitor such risks and to see how events unfold in coming months, there are still enough reasons to be positive about global growth.