In February, we introduced the main candidates of the upcoming French presidential election and their policies, detailed the nuances of the French electoral system and identified outcomes that could have a significant impact on financial markets. A link to this article can be found here.

Since the original publication, the Dutch election result has passed with no adverse market consequences and now investors will shift their focus to events in France. With the first round of the vote approaching on Sunday 23rd April, we provide an update on the current state of play.

http://presicote.factoviz.com/index/more/id/qoo_lew_1 Data as of 18th April 2017

Whilst Macron and Le Pen remain the front-runners to progress through the second round, the polls suggest a strong resurgence for the far-left candidate Mélenchon, on the back of a series of impressive showings in the televised debates. Unfortunately for him, a final debate scheduled for April 20th (3 days before the first round vote), has been cancelled due to several candidates saying they wouldn’t attend. With another strong performance, the probability that he would continue to take votes from the candidate representing his former party, Benoit Hamon of the Socialist Party, and from the three mainstream parties would only increase.

Nevertheless, second round polls suggest that Macron or Fillon would beat both Le Pen and Mélenchon in a run-off, which remains our base case, but a more concerning situation for financial markets would be a second-round contest between Mélenchon and Le Pen. Both candidates have pledged to renegotiate membership of the EU, whilst Mélenchon has discussed a 90% tax on top earners, reducing the working week and increasing the minimum wage, all of which would weigh on private sector competitiveness.

In such a scenario, regardless of the victor, we would expect increased volatility in European assets.

Investors have become apprehensive of this outcome and consequently the yield differential between French and German government bonds has widened again since late March (see chart below). This elevated risk premium reflects the market’s perception of increasing credit risk associated with French government debt. 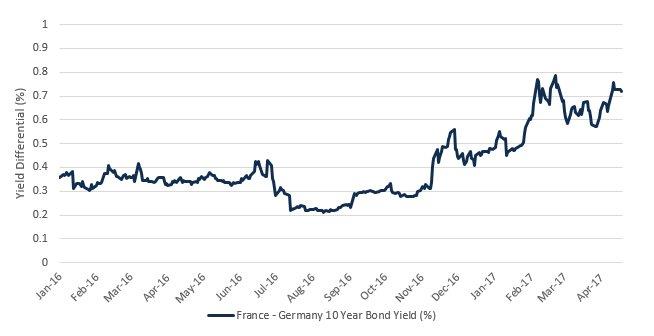 The polls suggest the French want a change of direction but they are not sure what route that should take. Hence there is a greater degree of wariness about whether the polls will prove accurate. It is only following the result of the first round that there will be a greater ability to predict any likely lasting market impact.

The financial markets are also acutely aware that, given France's membership of the euro, the ability for an immediate shift in macroeconomic policy is limited. It is the future direction and focus of policy where the divergences are most evident between the candidates. Therefore, it is likely that nothing immediately changes, although there will be widely divergent expectations about what might eventually happen.

Also, as we pointed out before, there has to be a possibility of co-habitation, where the winner of the Presidential election does not win a majority in the summer parliamentary elections. The Prime Minister would then come from a different party. While the President is without doubt the more powerful figure, that outcome may limit his or her ability to deliver policy seamlessly.

We believe the election creates eminent tail risks to financial assets; as such we will continue to monitor the political situation and the market consequences very closely and will provide further updates as we progress through the electoral cycle.