Let's seize the opportunity to invest in more infrastructure

After last week's actions by the Bank of England the last seven days have brought to the fore the issue of what next for UK economic policy. Two key messages stand out: invest more in the country's infrastructure and end uncertainty by leaving the EU sooner rather than later.

Take first, the message on infrastructure.

The UK government can now borrow at its cheapest rate ever. Although many investors are privately nervous about the current low level of government bond yields, their behaviour suggests they expect this to continue. As a result the Bank of England even found it difficult to buy the gilts it needed as part of its Quantitative Easing (QE) programme, as institutions did not want to sell.

The government should seize this opportunity, and issue infrastructure bonds. This would allow pension funds to invest in higher quality assets, while allowing the government to borrow cheaply for longer term needs. And it needs to do this in scale. It may seem strange to talk of borrowing when the budget deficit is high. But as with a person, there is a huge difference between borrowing to fund current spending - which is not good - versus borrowing on a mortgage for a long term investment like a property - which usually makes sense.

Although low bond yields are a global phenomenon, the government must still reassure investors about its commitment to reduce the budget deficit, helped by low rates, not throwing caution to the wind on current spending and by achieving stronger economic growth.

When built, this finished infrastructure - road, rail, schools, hospitals, housing - would help to share more economic success across the country and address social needs. The referendum campaign was eye opening for many people. This was seen in the vote, and in other ways too. For instance in general election campaigns, Conservative MPs travel to seats they expect to win, or to marginals. But the very nature of the referendum brought them across the country, including to many safe Labour seats.

It was clear that many parts of the country have not shared in economic success. It begs the question why not? Regional policy has not worked. The competency for cohesion funds that are key for regional policy had passed to Brussels. But it is more than that. Also, many cities still see net emigration of young people; London and Bristol are among the few exceptions.

There is a need to create a better working and living environment, with more housing, jobs and public services, and this requires more investment, innovation and infrastructure spending. A clear vision, targeted benefits and low taxes are vital too.

More infrastructure is also needed in some of the most prosperous economic areas too. I was a commissioner on the London Stansted Cambridge Corridor Growth Commission that released its major report last month. This is one of the most dynamic economic regions in the country. Firms investing there may be forced to choose between this region versus Asia or the west coast of the US. Yet it is held back by a lack of basic rail and road infrastructure, plus insufficient housing.

Interestingly, Stansted airport can almost double its number of passengers while still using its existing runway. Expanding airports has to be part of the infrastructure need, with the economic case in favour of Heathrow being overwhelming, compared with Gatwick. But some projects like HS2 lack credibility. We need a steady supply chain of projects that can be executed credibly, taking into account existing skill shortages.

But if we are to do this effectively we also need to enjoy stronger future economic growth. Therein lies the second key policy message of the week: clarity on our EU exit.

As if the referendum campaign was not long enough, the arguments for remaining in the EU were repeated last week. Only this time, the arguments previously said for remaining in the EU are now being used to justify not leaving it properly. Both the Institute for Fiscal Studies and the Mayor of London talked of remaining in the Single Market. The Mayor also suggested waiting until after the French and German elections. The reality of course is that we have no way of predicting how the French and Germans will behave, before or after their elections.

Since June 23rd one of the most compelling ways to proceed has been made jointly by Lords Lawson and Owen. And it is under our control. It is an Act of Parliament to give effect to our leaving the EU. Moreover it need only contain two clauses. One is to relieve the UK of all the obligations of EU membership. The other is ensure no disruption by carrying over into UK law all of the current EU law that applies to the UK.

MPs, naturally, would have to vote on this. This process would enshrine what the majority of the people voted for. Moreover, there is a strong argument for as short a period of uncertainty as possible. And we need to keep it simple.

The timing of when to invoke Article 50, also depends heavily on clarity about what we want from any renegotiation. Here three issues are key: sovereignty, migration and Single Market membership. Two of the main issues among the public for leaving the EU are returning sovereignty and having an effective migration policy. These are not possible with membership of the Single Market. Three into two doesn't go.

Thus, as was the case during the referendum, the debate looks set to focus on the pros and cons of Single Market membership, and on what this implies for any future renegotiation.

There is no doubt, as we saw in the campaign, that some firms, given their business model, see it as in their own interests to remain in. But the key debate is whether Single Market membership is a key national interest. And I am not convinced that it is. And neither it seems are the public, particularly given the trade offs that it implies.

But even in economic terms there is a strong case to leave the Single Market. We do not need to be in the Single Market to have access to it, while being outside not only returns control over laws and borders but frees the UK from EU regulations, its external tariff and allows us, as a service sector economy, to position ourselves globally, compete internationally, particularly in financial services, and play to our strengths. We need to communicate this positive global message at next month's G20 meeting in China.

We should also be more confident about our ability to adapt and change. Last week the European Central Bank released its latest Economic Bulletin and it contained one telling chart that is shown here. The vertical axis shows flexibility of labour and product markets. The horizontal axis shows countries with flexible institutions. The top right hand corner is the best place, with the economies most flexible to cope with economic change. The UK fares well. 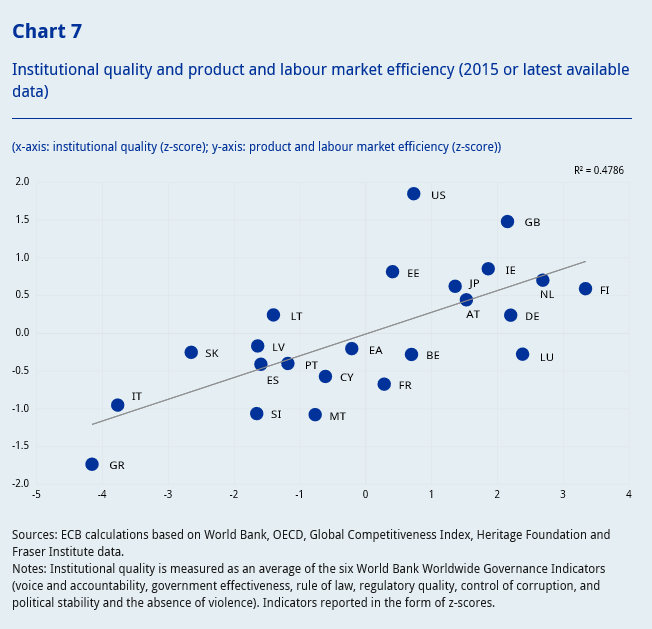 The UK has a great opportunity to position for future success with a mutually reinforcing social and economic agenda. Let's seize the moment to invest more in our infrastructure and take a decision to leave the Single Market and the EU sooner rather than later.