This week we thought it would be useful for our readers to have a round-up of some broader global themes, all of which in this globalised and connected world economy can have an impact, direct or otherwise, on financial markets and hence on future returns. It will give you an insight also into some of the many topics we keep a focus on.

Sentiment towards financial markets has been broadly positive in recent months in Western economies. But, as the recent political situation in the UK has demonstrated, sentiment can change very quickly. Such swings in thinking also happen in financial markets. This is worth bearing in mind now, as here I highlight some of the key current issues.

The global recovery is gaining traction

The world economy is recovering and looks set to grow at a solid pace this year. There has been a steady improvement in sentiment over the last year, although the narrative has not always changed with this, partly because there is still much disagreement as to whether this will be sustained. Global reflation has been seen across Western economies, monetary policies are still accommodative, despite Fed tightening, and fiscal policies have been relaxed. Nominal GDP (growth plus inflation) is higher and - provided policy rates and market yields do not rise significantly - then this will help debt dynamics, allowing budget deficits to fall. In this environment, asset prices (equities and bonds) have remained well-underpinned, despite the recent dampening effect on equities of the weak oil price.

There are many different aspects to this improvement in global activity, in terms of investment implications. But it is important to stress that there are still widely diverging views about what happens next. Markets appear to be assuming more of them same, with inflation and rates relatively low, growth steady.

Beyond that, views range from stagflation (slower growth, plus inflation), to a weak growth outlook with slower US growth and low inflation, to more positive views. My view is that global growth looks set to be solid over next year, but the US economy appears to lack momentum and the UK is slowing.

If the recent pick-up in global activity is sustained, then the issue we really need to be prepared for over the next six months is that markets will likely focus much more on a normalisation of monetary policies across Western economies. Whether it happens remains to be seen. Exit strategies will vary, with the US leading, the UK next, while the European Central Bank (ECB) and the Bank of Japan (BOJ) will lag. This is potentially the most important issue we need to consider for the remainder of the year. It will in turn have currency implications.

In recent years there has been a divergence in monetary policy among the major central banks. The size of the balance sheets of the ECB, BOJ and Fed are all now similar - around $4.5 trillion - but as a proportion of their economy, very significantly, being considerable for Japan. While the Fed’s balance sheet has been broadly unchanged for three years, both the BOJ’s and ECB’s have risen sharply over the last year. For Japan, the BOJ’s actions have underpinned Japanese assets. While for the euro area, the ECB’S behaviour has played an important part in the current cyclical recovery.

When you consider the impact of low rates, the possibility that they could rise means we should not underestimate the risks. Generally, in recent years, monetary policy has been successful in minimising the downside economic risks, but the prolonged period of both low and predictably low rates has had a combination of side effects. It has led to markets not pricing properly for risk. It has fed asset price inflation. Low rates have lowered the price of leverage and in turn contributed to an increase in debt.

There has been a misallocation of resources, as zombie companies have been kept alive and finance has been directed towards financial assets and not towards funding real investment. In the wake of the crisis - particularly in the EU - there was talk of the need for reform, but the role of monetary policy may have delayed that necessary change. Also, monetary policy has provided a relatively stable backdrop for changes to be pushed through in the banking sector.

There have been spill-overs from one country to another, including more international buying of Government debt. Finally, financial markets and economies may be vulnerable to this stimulus just halting or to it being reversed. There is no denying that monetary policy has played a beneficial role in the crisis but, when one also considers these side effects, it should heighten awareness of possible challenges when monetary policy begins to be normalised.

Like many aspects of current monetary policy, there is no definite rule as to what this means. But it implies a phased withdrawal of quantitative easing (QE) and higher rates. It would imply a rise in rates to levels more consistent with low inflation - and for many central banks, including the Bank of England, consistent with achieving an inflation target of 2%.

Currently, here in the UK, the Bank of England’s policy rate is at its all-time low of 0.25%, and its amount of Government bond purchases is £435 billion and its corporate bond purchases £10 billion. After the recent 5-3 vote to keep policy unchanged the Bank is closer to a rate hike, although one is not necessarily imminent. And since that vote, one of the members who voted for a hike has been replaced by a new member after her term finished, while the Bank's chief economist has given a mildly hawkish speech on rates and the governor has sought to play down talk of an early hike. 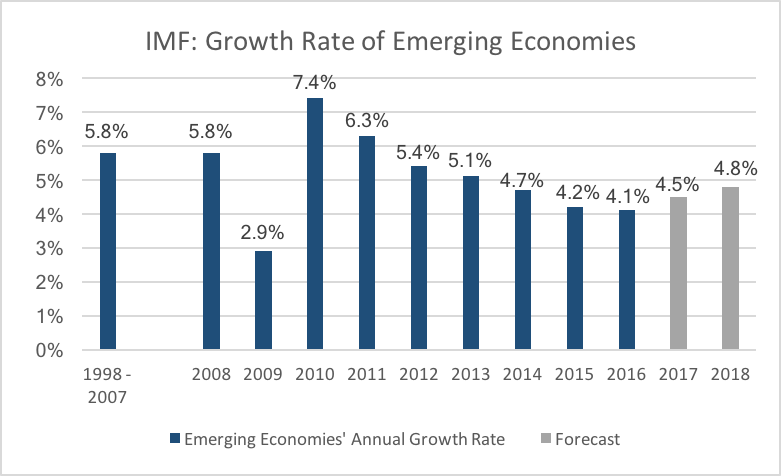 
Growth peaked in 2010 and slowed until last year and may now be in the early stages of a pick-up. At the beginning of last year the fear was of a China slowdown, now the sense is that its economy is recovering. India, too, is growing steadily. This has contributed to more positive sentiment towards the emerging markets.

This leads into one area that I will feel people are coming to terms with: China's Belt Road Initiative. This includes large scale infrastructure spending, energy investment in markets along the route and other tie-ups across the globe. Quantifying the full impact is still difficult but essentially it is China going global. The Belt Road is three years in and, despite initial scepticism towards it - even in China - it is the President’s pet project and is so gaining greater traction: witness the recent summit in Beijing attended by 29 world leaders, despite a US-led boycott.

It is not something we can directly plug into but indirectly it plays to emerging economies, and even global firms in the UK and elsewhere that can leverage off this. To balance this longer-term positive, the near-term challenge for China is increased international awareness of its poor debt position, linked to its shadow banking sector and domestic credit growth. Overall, however, the Chinese economy is growing at a steady pace compared with worries about a sharp slowdown at the start of last year. As the IMF highlighted at its spring meeting in Washington, the debt situation in China warrants attention, although for now steady growth suggests this is a future worry rather than a current problem. For the Chinese economy, the trend is still up but there will be setbacks along the way.

The biggest challenge for investors is UK politics. There are multiple aspects of this we may wish to consider; a negative impact on economic activity, which may already be happening, judging from the Institute of Directors (IoD) survey last week, although we should remember there was a knee jerk reaction after last year's referendum too; political risk - an early election is still possible but the most likely outcome is that the Conservative Government struggles on, perhaps with a new Prime Minister; and international attitudes towards UK assets - again this may not change too much, but international investors hold around one half of UK equities one quarter of the UK commercial real estate market, over one quarter of gilts and around one half of UK equities.

The EU exit negotiations have now started, with the initial focus on the rights of EU citizens, the divorce settlement and Northern Ireland. Beyond that, markets may be sensitive to any perceived disagreement between the Chancellor and Prime Minister, which is hovering beneath the surface.

Add in the diverging views at the Bank of England we mentioned earlier and it points to a potentially more volatile time for UK assets.