A quick update on China, which has come back to centre stage for financial markets. The current big focus is on the US-China trade talks, but also there is wider concern about the state of the Chinese economy. In November, I spoke in China at the inaugural Shanghai expo conference, and came back with the view that the domestic economy was slowing. This is borne out by the significant policy shift that has taken place in China over the last year. Back in December 2017 at their annual Economic Works conference, which sets the main domestic economic policy agenda, the main focus was on deleveraging the economy and preventing a build up of risks within the financial sector. This was the message repeated in Davos in January 2018 by Liu He, the leading China economic spokesman, as preventing risks, alongside addressing poverty and pollution were seen then as the three big policy goals for 2018.

However, as we moved through 2018 it was clear the economy was slowing. There were two main factors: the domestic slowdown and the hit from the US escalation of China-US trade tensions. The economy already appeared to be slowing prior to trade tensions, which have exacerbated the downturn.

As the economy slowed, the focus has shifted. First, on the domestic front, the annual Economic Works conference in 2018 focused on boosting the domestic economy. This will be the backdrop for the March People’s Congress in Beijing. A pro-active fiscal policy will be supported by a monetary policy that while described as prudent, will likely be far more accommodative. Indeed this was seen at the end of last week when the Chinese cut reserve requirements, aimed at boosting liquidity in the financial system and lending in the economy. The reserve requirement ratio was cut 1% to 13.5%.

The second area is on trade. Last year trade tensions were deteriorating. Now the latest signs are far more encouraging. The markets are reflecting this. The truce agreed between Presidents Trump and Xi at the Buenos Aires G2O Summit at the start of December has provided the backdrop for the current series of negotiations. Last week, we are told, intense conversations set things up for the two days of bilateral meetings in Beijing at the start of this week. Four working groups have been set up: Chinese buying of US products; agriculture; intellectual property and non-tariff barriers. The focus for the Americans it seems is on what I would call quantity and quality: quantity in the sense of one working group looking at increased Chinese buying of US goods and services, along the lines of the comments made at the G20 Summit; quality in terms of the other three working groups and more detail about the future bilateral trade relationship. Intellectual property rights have been one of the key concerns for international firms.

The attached chart shows China’s imports - while the pace of import growth has slowed over the last year, in line with the domestic economic slowdown, there has been a sharp fall in imports from the US. While such imports from the US have fallen sharply before, it is the divergence with other imports into China now that is noteworthy. In some respects this feeds US concerns, as well as possibly suggesting that China’s retaliatory measures against US products may have been aggressive. Clearly, in the eyes of the markets, an easing of trade tensions would allow planned measures to not go ahead and previous ones to be reversed.

Change in Chinese Imports from the US and in Total 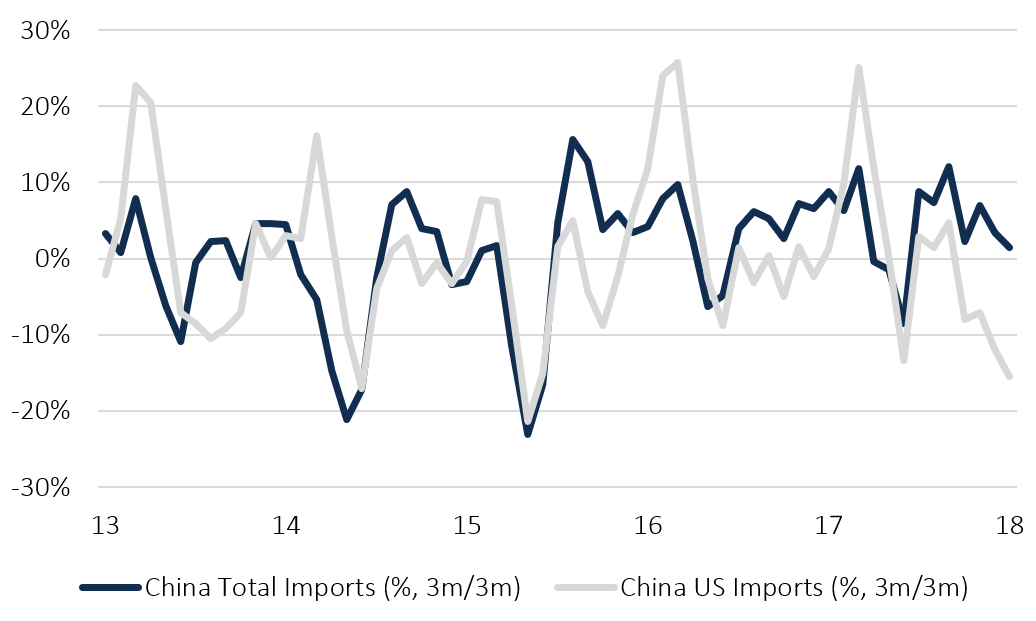 If these meetings go well, then the plan is for a follow up next week in Washington between US trade representative Lighthizer and Liu He, who also, in what was interpreted as a good sign, paid a short visit to the trade talks in Beijing this week. Assuming the direction of travel continues to be positive, then in Davos at the end of January, President Trump could meet Vice Premier Wang Qishan, who is heading up the China delegation.

Naturally, it is a case of watching what people do as well as listening to what they say. The comments, it seems, are constructive. The markets are taking positives from that. But don’t be surprised if after the next few weeks, some of the language cools, and the focus switches to the detail. The challenge often is in agreement that there needs to be measurable metrics, so both sides can monitor progress. There are many areas where one would expect there to be progress, as a favourable trade relationship is in the economic interests of both sides. But while there may be progress on trade, do not be surprised if there are other areas on tension in the future, given the domestic political timetable in the US as we approach election year in 2020 and also in view of the wider strategic and defence and security issues that will matter too. As a result, financial markets will focus on policy measures in China to stimulate domestic demand and further positive steps in alleviating trade tensions.