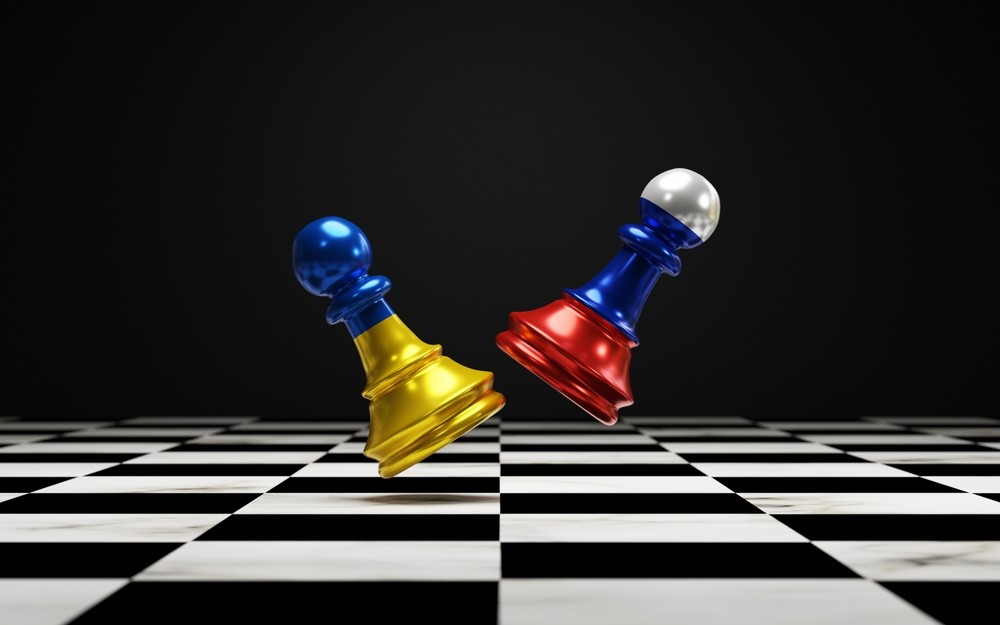 The economic and financial consequences of the Ukraine conflict

What are the economic and financial consequences of the war in Ukraine, and what may lie ahead?

Also, before the war, inflationary expectations pointed to a persistent inflation problem, adding to pressure for central banks, led by the US, to hike. Now the war has hit against this backdrop.

Thus, the main market fear is that the war will trigger stagflation: higher inflation and weaker growth at the same time. This is a valid concern. But in all likelihood, they may not occur at exactly the same time with a potential sequence of higher inflation over the next six to twelve months followed by an economic slowdown later this year and next.

If this proves to be the case then, as growth slows, this should dampen inflation concerns as we move through next year. This may not help the immediate outlook but could create more policy space in the future.

One of the biggest challenges of stagflation is that it limits the ability of policy to respond. For instance, tighter monetary policy is needed to curb inflation, but looser monetary policy to help growth. It often, therefore, puts the emphasis on fiscal policy.

The trouble is that many countries have little room for policy manoeuvre, as monetary policy is loose, and public debt or budget deficits are already high. What we are seeing is a legacy of loose monetary policies from the pandemic, that have allowed inflation to persist and the consequences of one economic shock – because of this war – occurring so soon after the world economy has yet to recover from the previous shock – namely the pandemic.

An additional challenge for financial markets and for policy makers is the uncertainty both over the military endgame and over how long the war could persist.

Russia is not an economic superpower. Thus, the contagion from the war will be via the imposition of sanctions and financial constraints and via its position as a major commodity and energy provider.

This will mean countries and firms that export to Russia will not be able to do so, that firms who invest there may have to write those investments off, that financial firms who lend there may experience defaults and write-downs (and as we know from previous crises there may be unintended knock-on effects through the financial system), and also there will be an impact via higher food, commodity and energy prices as exports from Ukraine or Russia may be halted.

Ahead of this crisis Russia was the eleventh biggest economy in the world, while the UK is fifth. Russia’s income per head is low. Its economy will collapse as sanctions hit. However, there is little evidence historically that sanctions halt a military aggressor.

Russia is a military power with nuclear capabilities, but it is important to note that its military (defence) spending is only similar in dollar terms to the UK’s, although higher in relation to the size of its economy. Thus, as has been pointed out by military experts, it is quite possible that this war could persist for some considerable time. This will add to market uncertainty.

The first impact of the war will be through higher commodity prices.

Before the war, energy prices were already high, with gas prices elevated, and oil prices had been on an upward trend for almost two years. War has pushed energy prices significantly higher through an added risk-premium on gas and oil prices and has thus added to concerns about growth and inflation.

Although Russian energy exports are not (currently) being sanctioned, if they were this would add to energy prices. Other commodity prices are also already higher, particularly wheat, given Ukraine’s importance as a wheat producer.

The International Energy Agency (IEA) reports that in 2021 Russia produced 10.72 million barrels per day (mbpd) of oil, second only to the US, at 16.39 mbpd. Russia even produces more than Saudi Arabia, although it exports less than they do. The UAE, Saudi Arabia and Russia are the major exporters of oil.

The importance of Russia in terms of gas is even more significant. In particular, according to the IEA it accounted for 45% of the EU’s gas imports and 40% of its gas consumption last year. The IEA attributed to Russia, “artificial tightness” in European gas markets towards the end of last year as it deliberately reduced gas exports to the EU; they fell 25% year-on-year in the fourth quarter of last year.

This has exacerbated existing inflation pressures, likely to be evident in coming months. Then, depending upon how that impacts costs and prices, there will be a dampening effect on the pace of growth.

In the UK there is a very differentiated effect across firms and people. As one example, the Bank of England noted in testimony recently to the Treasury Select Committee, the lowest income decile group spends twice as much on energy as higher groups, about seven percent.

So poorer groups, who have a higher marginal propensity to consume and thus spend all their income, will have less to spend on other things. The point is different groups have varying ability to cope with such shocks. Overall, the savings rate is high, but the picture varies. Likewise, across the corporate sector, despite apparently healthy balance sheets, many smaller firms may not have all the access to finance that they seek.

The second impact will be on the outlook for policy rates.

The war has not only added to higher energy prices, it has increased economic uncertainty. This will impact policy. Part of the challenge is that monetary policy was already too lax when the shock from the war hit.

Already this is reflected in how the markets have repriced the outlook for policy rates in the west: the direction has not changed, but the pace and scale of expected tightening has. Markets now see rates rising less rapidly than before.

This stance was given some credence over the last week in comments by the US Federal Reserve Chair Jerome Powell. A quarter point hike by the Fed is now seen as certain in late March. Rates are then expected to rise by 0.25% per quarter to 1.66% by the middle of next year.

But this tightening would still leave policy rates in negative territory in real terms. Inflation is 6.1% and the balance of risks suggests it could head higher. The latest US jobs data, where non-farm payrolls rose by 678,00o in February and the unemployment rate fell to 3.8%, is testimony to a strong rebound. Against that we should note – while not every US recession has been preceded by higher energy prices, a sharp spike in oil prices has always been followed by a recession.

A similar worry exists in the UK. The economic rebound is solid, with the UK’s manufacturing purchasing managers’ index reaching a three-month high of 58 in February (above 50 indicates expansion), reflecting robust domestic demand and an easing of supply chain worries. The labour market is also very strong. Yet a cost-of-living squeeze is imminent, and the war in Ukraine will exacerbate this. This will temper the pace at which the Bank of England will hike interest rates.

Across the globe domestic policy responses may differ. In the US, for instance, gas prices are lower, and fiscal policy looser. This may imply the Fed has more scope to hike compared with others.

In China, meanwhile, the annual Two Sessions political gathering in Beijing began with an unveiling of a 5.5% economic growth target for this year, and a desire to keep inflation below 3%. China has room to ease fiscal policy and, having adopted a prudent monetary policy in recent years, may be able to ease monetary policy, too.

Therefore, the world’s two major economies, the US and China, may be better positioned to weather the storm.

Another impact from the war will be via sanctions.

While Russia still has access to foreign currency via its energy exports, the imposition of sanctions, the decision of some container companies not to dock at Russian ports, and the exclusion of Russia from international capital markets should have a profound impact. That being said, even with access, Russia has not really diversified its economy sufficiently away from commodities in recent decades. Thus, its trend rate of growth has been low.

Russia as an export market for goods and services will be shut to western countries.

As an indication of how countries are impacted, take the UK. Russia is the UK’s 19th largest trading partner, its 26th biggest export market and the 15th largest importer. The latest data for the year to the end of Q3 shows total trade in goods and services was £15.9 billion.

According to the Department for International Trade, UK exports over the year were £4.3 billion: cars being the largest item at £386 million, medicines and pharmaceuticals £272 million, capital machinery £199 million and intermediate power generators £176 million. Imports were £11.6 billion over the year, with the largest items being: refined oil £2.6 billion, non-ferrous metals £1.3 billion, crude oil £1.0 billion and gas £559 million; plus a plethora of unspecified goods imported.

Likewise, investment flows will be impacted. In 2020, the inward total stock (not flow) of foreign direct investment (FDI) from Russia to the UK was £681 million; the outward stock of total FDI into Russia was £11.2 billion, a large amount, although less than one percent (0.7% of the total stock).

The exclusion of Russia from international capital markets should have a profound impact on its economy.  London’s role as a global financial centre should not be impacted.

One component of sanctions was to cut many Russian banks off from the west’s global payments system: SWIFT. Critically, a key decision was taken to exclude the Russian central bank and thus limit its ability to access the large amount of foreign exchange reserves it had accumulated, over previous years, the bulk of which are housed in central banks outside Russia.

There is little doubt it adds to the financial and economic pressure on Russia and it could have profound longer-term consequences, too.

It could accelerate the move towards a global currency system not dominated by the dollar and a payments system not dominated by the west. There has been much focus in China, in particular, on a multilateral alternative to the dollar-dominated system. Also, Russia and China have both developed their own versions of SWIFT in recent years. In addition, there is a race underway across countries to develop new global central bank digital currencies.

Another legacy of this war may be increased global defence spending. Germany, for instance, has outlined that it plans to increase defence spending to NATO’s target of 2% expenditure of GDP. The UK, which already achieves this target, may decide to boost defence spending further, highlighting the future budgetary challenge the UK faces.

There is also the humanitarian fallout. The recent UN World Migration report noted that there are 281 million international migrants. Over the previous decade this had risen by around 60 million, on average, 6 million per year. Thus, if as some fear there are 5 million migrants from Ukraine (population 44 million) it would be a huge migration crisis.

Financial markets are selling off sharply. This both reflects uncertainty about where the war might lead militarily and concern about future growth. The impact of the issues highlighted above will vary both within countries and across them, too, and in all likelihood will trigger a more nuanced policy response that will vary from country to country.

Economic shocks tend to have an immediate, profound effect, as we saw during the pandemic, with markets often discounting all the bad news at once before there is then an opportunity to digest how the underlying picture is unfolding and the policy options that lie ahead.