The Outlook for the UK Economy: the ‘Nike swoosh’

At the beginning of the year, in our forecast that was included in the FT’s Year Ahead Survey, we were among the more optimistic about the UK. Then, we saw the economy growing just over 2% versus 2.2% last year. We expected the pace of growth to slow during the year, with growth next year weaker than this. This remains our view, and our forecasts are unchanged. In contrast, market sentiment has shifted very much towards our way of thinking.

According to HM Treasury, the average of independent forecasts for the UK economy for 2017 has risen from a low of 0.7% last August, and a 1.2% forecast made in December to the most recent one of 1.6% in March. The official forecast, made by the independent Office for Budget Responsibility (OBR) at the time of the Spring Budget, is for 2% growth this year. This compares with the 1.4% forecast it made at the time of the Autumn Statement. So forecasts have been revised up for 2017 and this makes sense. Also, the OBR expects growth of 1.6% next year.

The UK economy has proved resilient 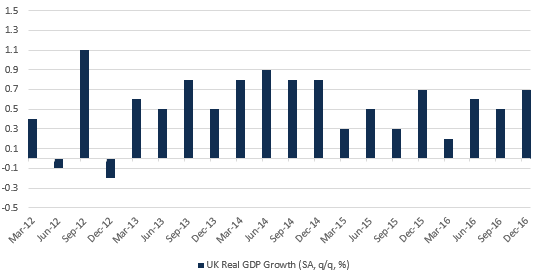 Following the Referendum last June, the economy avoided the financial Armageddon and economic collapse predicted by some and feared by the consensus. Instead, the economy has been very resilient, as we thought it would be, helped by the pound’s fall and the Bank of England rate cut – both of which we expected. We didn’t agree with the Bank’s decision to buy corporate debt, but understood its decision to ease rates and expand quantitative easing, even though at that time monetary data suggested the economy was already growing at a steady pace. The challenge, of course, for the Bank is that having cut rates, it is reluctant to tighten them anytime soon, in case this weakens the economy further.

Last year the quarterly rates of economic growth were 0.2% in the first three months, then 0.6%, followed by 0.5% and then 0.7% in the last three months of the year. The economy has now enjoyed 16 successive quarters of growth. The last time the economy contracted was in the final three months of 2012 – when it was down by 0.2% - but even that has to be put in the context of the time, when it followed a buoyant third quarter that year of 1.1% growth.

Indeed, even though the economy contracted in both the second and fourth quarters of 2012, this was interspersed with growth in the first and third quarters of that year. Going further back, during the second half of 2009 and all of 2010 and 2011 the economy grew in every quarter. So in 24 of the last 26 quarters, the UK economy has grown each quarter. That is a solid performance. It helps explain why the employment data has been so solid, although wage growth has remained relatively subdued.

Could a slowdown be due?

The last prolonged period of weakness was in the immediate aftermath of the global financial crisis. Then the economy contracted for five successive quarters. This was from the April to June 2008, when the UK was already weakening before the crisis, and then continuing through the height of the crisis in late 2008 and the first half of 2009. And that was despite huge policy stimulus at the time.

All of this might suggest that the economy is due a slowdown soon. Normally at this stage of the cycle – after seven years of continuous growth – it would not be a surprise. The question then is whether recent economic data is signalling this? 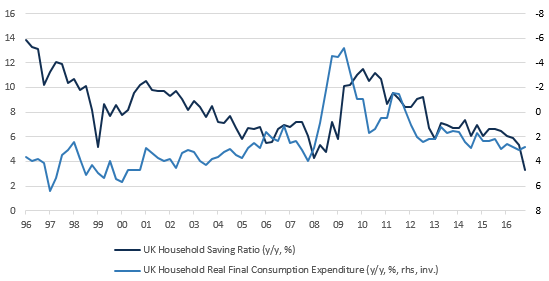 One of the challenges is that turning points in economies are usually characterised by conflicting monthly economic figures. In addition, conflicting data does not always signal a turning point – and can be ‘just one of those things’. This adds to the difficulty of how to interpret such data. Previously we have outlined two features that could come into play. One is the uncertainty associated with the two-year Brexit negotiation. This could always provide a reason for some to delay to investment or spending. I have called this a ‘Nike swoosh’ were it to materialise, temporarily dampening activity but not causing a recession, before growth picks up further ahead.

The second is that against a background of global reflation and higher oil prices, and a weaker pound, higher inflation could dampen spending power and with it lead to a slower pace of consumer spending. Indeed, as the OBR pointed out at the time of the Budget, there has been a “past boost to real income from temporarily low inflation”. This allowed spending to grow last year by 3%, its fastest pace since 2007, before the global financial crisis. The savings ratio fell last year, as people saved less of their income.

The rise in inflation should be brief

Both of these features should take any potential heat out of the economy and ensure that the rise in inflation now being seen is short-lived. This view of inflation is in line with current Bank of England thinking. Although higher import and input prices are feeding through, domestic cost pressures remain subdued. Profit margins, which are healthy, also may be squeezed as firms opt to keep prices down in order to retain market share. It means that even though interest rates are at low levels, they may stay there this year. And that appears to be the message from recent comments from the majority of Bank of England policy makers.

Sterling’s fall has, of course, given exports a boost. The global reflation that has been evident since last summer thus gives UK exporters an ideal environment in which to see volume gains. This is in contrast to the external environment that was evident the last time the pound fell, in the wake of the global financial crisis. Depreciations are, traditionally, good news for the economy, helping to rebalance it. And it is always possible that were we to be wrong in our forecast, growth will be on the higher not the lower side. Indeed, the list of international firms that have committed to the UK since last summer with investment plans is already a long one. But the outcome for any economy depends upon the interaction between the fundamentals, policy and confidence. And taking all these together, we stick with the forecast highlighted at the top - solid growth this year, but slowing as the year progresses.