The Prospects for Inflation

What is happening to inflation? Ahead of the global financial crisis of 2008, the acronym that was often heard in policy circles was NICE: no inflation, continuous expansion. Despite strong growth at that time, inflation was low. That period highlighted an important lesson that has held since – namely despite cyclical factors, there were a number of longer-term structural factors restraining inflation and keeping it subdued.

Then the financial crisis hit and the world economy was plunged into recession in 2009. Since then recoveries in western economies have been weak by historical standards, with inflation low. Meanwhile, emerging economies have accounted for more of global growth, and while they have experienced higher inflation than in advanced economies, it is still relatively modest.

According to the International Monetary Fund (IMF), consumer price inflation in the advanced economies was 2% last year and is expected to be 1.6% this year and 2.1% in 2020. Across emerging and developing countries, the corresponding figure was 4.8% for 2018, with the IMF projecting 4.9% for this year and 4.7% for 2020. 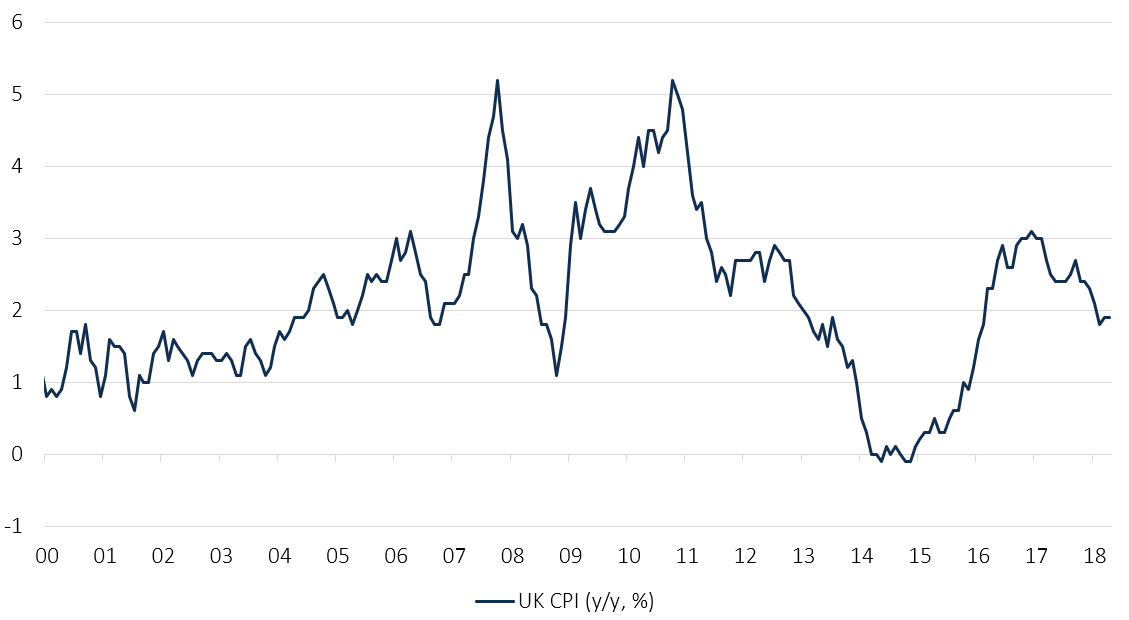 With inflation low, the focus is on downside economic risks

In this context, with inflation expectations subdued, the policy debate has shifted away from the perceived need to curb inflation risks, and instead to a focus on the need to address downside economic risks. Thus, with inflation low and policy (particularly monetary) viewed as accommodative, financial markets have been underpinned this year. Yet, the slowdown in the world economy in the second half of last year has triggered increased uncertainty about the immediate outlook.

“Avoiding policy missteps that could harm economic activity needs to be the main priority.” The above statement, buried in the executive summary of the IMF’s recent half-yearly global economic outlook report, has been the main takeaway, not only from the IMF spring meetings that took place in Washington – which were attended by central bank governors and finance ministers – but also from a plethora of recent policy statements from across the globe.

Generally speaking, depending on the country, previous policy tightening is on hold, or policy easing is happening, or on the way. There are few exceptions.

What then are the structural factors accounting for low inflation? Well, one might naturally say the monetary policy of central banks. Despite fluctuations in economic activity, inflation expectations have stayed low in most major economies, contributing to relatively low bond yields, despite high levels of debt. Financial markets reflect confidence in central banks’ ability to achieve their inflation targets.

Yet despite this, and as we saw before 2008, while headline inflation was low in many western economies, there was rampant asset price inflation. There are shades of this now. Thus, macro-prudential policies have assumed a far greater role in helping to ensure financial stability, alongside monetary policy’s role in keeping inflation in check.

Also, ahead of the financial crisis, central banks appeared to focus more on the impact of unemployment on wage growth – and also on how much spare capacity there was in an economy, to determine potential pressures and thus monetary policy. The former was encapsulated in a focus on the Phillips Curve (that showed the inverse relationship between unemployment and wages growth) and the latter in terms of the output gap (how much spare capacity an economy may have based on its growth rate relative to its potential). 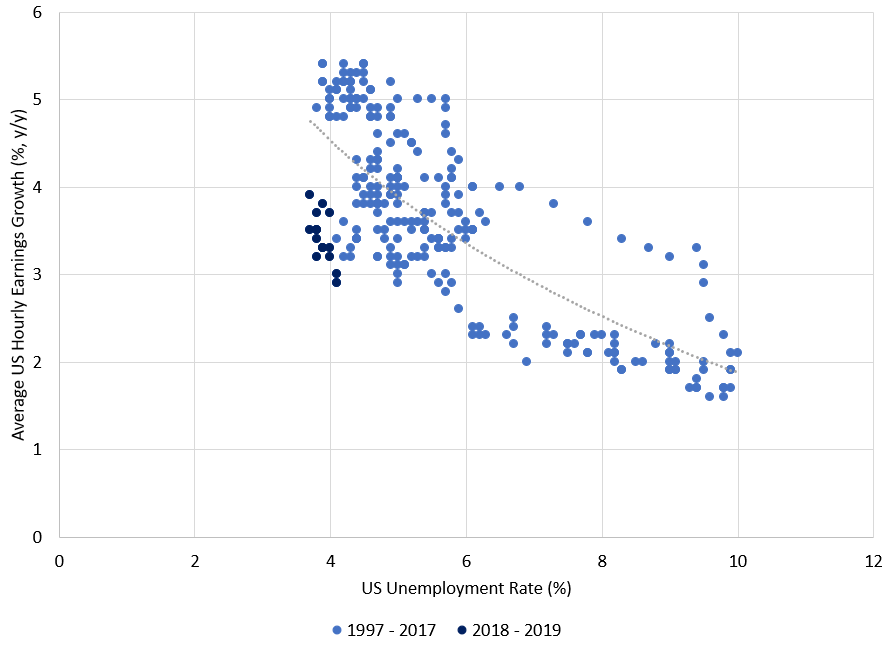 Source: Bloomberg, Bureau of Labor Statistics with Netwealth calculations. This graph shows the relationship between one measure of wage inflation (Average Hourly Earnings Growth) and unemployment in the USA, going back to 1997.

While both relationships still attract attention, they are not viewed as sacrosanct, being seen to not hold sway in the way in which they might previously have done. Thus, if one was to look at, say, the US, UK and Japan, despite low rates of unemployment and no or little output gap, inflation expectations have remained anchored and central banks appear relaxed (although not complacent) about inflation pressures.

In part, this is because in addition to monetary policy, there have been significant structural changes in the world economy. Globalisation, new technology, the demise of unions and financialization (where the financial sector’s growth has outstripped that of the overall economy and its influence grown) have all combined to restrain wage growth and help keep inflation in check. These same factors still appear important now.

While such policy and structural factors have reinforced market thinking that we are in a disinflationary environment – where inflation will be low – we should avoid complacency. While we believe that the factors mentioned above will continue to exert downward pressure on inflation, there are also cyclical factors that could always trigger a temporary pick-up in inflation. These need to be monitored.

What about energy and commodity prices? In the past these have often provided a shock, adding to inflation. There are various channels that these could feed through, such as higher food prices, adding to upward pressure on wages and inflation expectations. Or, to central banks not tightening monetary policy, thus accommodating the potential inflation shock, allowing it to feed through.

In the past week, oil prices firmed higher, largely on the back of fears that tougher enforcement of sanctions on Iran could push oil prices up. According to the International Energy Agency (IEA), Iran produced 1.1 million barrels per day (mb/d) in April, 1.7 mb/d less than May last year. OPEC has maintained a high compliance on curbing supply, particularly Saudi Arabia.

Thus, increased output elsewhere could substitute for a further reduction from Iran, without causing upward pressure on prices. There has also been a significant increase in energy supply from the US, particularly over the last year. All this is keeping expectations of future energy prices subdued. Yet oil prices appear likely to be underpinned by steady world oil demand, despite a sharp slowdown in the fourth quarter of last year, particularly in Europe.

Even after that decline, global oil demand grew overall in 2018, and looks set to remain firm in 2019. According to the IEA, world demand rose from 97.9 mb/d in 2017 to 99.2 mb/d in 2018 and, as the IEA says, emerging economies are “the source of most oil demand growth.” The graph below shows the recent trend in oil prices.


The price of oil is a long way off its peak

The UK’s inflation performance over the last decade gives a good insight into current inflation dynamics. There have been two significant bouts of sterling weakness: in the wake of the 2008 financial crisis and following the 2016 Referendum. On both occasions, the weaker pound contributed to a rise in imported inflation. This, however, did not lead to a sustained pick-up in inflation, as domestic inflation pressures remained subdued.

Thus, even with potential inflation shocks – whether in the case of a weaker currency or even higher energy prices – the key is what happens to the transmission mechanism and whether competitive pressures keep inflation subdued, or whether monetary policy tightening is necessitated.

The Bank of England expects inflation to be close to its 2% target in coming years, allowing it more room for manoeuvre on future policy. Other major central banks concur, including the US Federal Reserve, who in their most recent statement said, “On a 12-month basis, overall inflation has declined, largely as a result of lower energy prices; inflation for items other than food and energy remains near 2 percent. On balance, market-based measures of inflation compensation have remained low in recent months, and survey-based measures of longer-term inflation expectations are little changed.”

In the euro area, meanwhile, the European Central Bank (ECB) is certainly conscious of the need to avoid premature policy tightening, as in the past, which then led to a fear of deflation, with prices falling. The euro area, although experiencing weak growth recently, appears to be experiencing a cyclical recovery. This in turn should allow inflation to creep towards the ECB’s inflation target. The Bank of Japan, meanwhile, shows little sign of edging away from its accommodative policy, as despite modest growth, inflation remains subdued.

We continue to watch overall potential inflation pressures closely, whether it be oil prices or wage pressures. For instance, wage growth is rising, albeit from low levels, in the US and UK, where labour markets are tight. Also, as we have seen in financial markets there is some evidence of asset price inflation, too.

The inflation risk that needs to be monitored in coming months is this: firms could find they are able to pass on higher costs, whereas in recent years they have absorbed any cost increase in their profit margins, or if tight labour markets lead to a rise in wages that may feed domestic inflation pressures. Of course, if these were to occur it may only trigger some upward creep in inflation, not a surge, as the structural factors curbing inflation are deep-rooted.

Indeed, while we will monitor these risks, the recent cyclical downturn in the world economy, plus increased uncertainty about what lies ahead – aligned with intense competition and the structural pressures alluded to above – suggests that even if there was a rise, it would be modest, as inflation pressures remain modest. If so, this will allow central banks more room for policy manoeuvre, to be able to delay previous policy normalisation or be accommodative if needed, as well as being gradual and predictable in their policy actions.