What is happening to the UK economy and what are the policy and market implications?

We recently posted an overview of the global economy, signalling its slowdown and highlighting current trade tensions and the turnaround in the direction of global monetary policy; away from tightening and towards easing. While we have also often highlighted the political uncertainty in the UK, we expect an orderly exit from the EU, followed by a transition period. But the risk of a no-deal Brexit is increasing.

UK outlook is muted as businesses play a waiting game

The UK outlook has to be viewed in the context of both the global economy and how our exit from the EU may unfold. The UK economy grew strongly in the first quarter. Stock-building ahead of the initial March 29th deadline for EU exit helped. Growth was up 0.5% on the quarter.

In contrast, the picture in the April to June quarter (Q2) was weak, as the boost from stocks was not repeated and investment remained soft. The signs are that economic growth was flat to down slightly in Q2, with this softness continuing, it seems, into the start of the third quarter.

While there has been some commentary about a technical recession (two successive quarters of negative growth) it is premature to predict this just yet. In all likelihood stock building will boost the economy before the end of October, as it did in Q1, and if there is a Brexit “deal” then investment and confidence will bounce.

However, as recent surveys have revealed, it should be of little surprise that confidence in construction, services, and manufacturing appears fragile. The British Chamber of Commerce description of business investment and decision-making being “in limbo” seems fair. The surveys suggest business is waiting to see how Brexit unfolds.

The latest monthly summary from the Treasury of economic forecasts shows little change. The consensus is for growth of 1.4% this year and next, and CPI inflation of 1.8% this year and 2.1% next. The budget deficit, according to these forecasts, is expected to be broadly unchanged, with public sector net borrowing at £29.9 billion in 2019/20 and £26.4 billion in 2020/21.

Yet the current account deficit remains poor and the consensus forecast is for little change, hovering around £80 billion per annum.

However, the jobs picture has been impressive with one million posts added since the 2016 Referendum. It highlights a key positive of the economy, namely its flexibility and adaptability, reflected in its ability to cope with shocks.

But there are major challenges – a significant number of people are in low paid and insecure employment. Not only is this an issue in its own right, it feeds into the debate about poor productivity growth, with the economy having many low wage and low productivity jobs.

Overall, however, the tighter labour market has led to higher wages. Wage growth had risen to an annual rate of 3.5% in Q1, and is now at 3.1%. In contrast, consumer price inflation was 2.0% in May, having been a recent peak of 2.7% in August 2018. The deceleration in inflation in recent years is because the impact of sterling’s post Referendum depreciation has eased, while domestic inflation has remained subdued.

UK wage growth has been robust 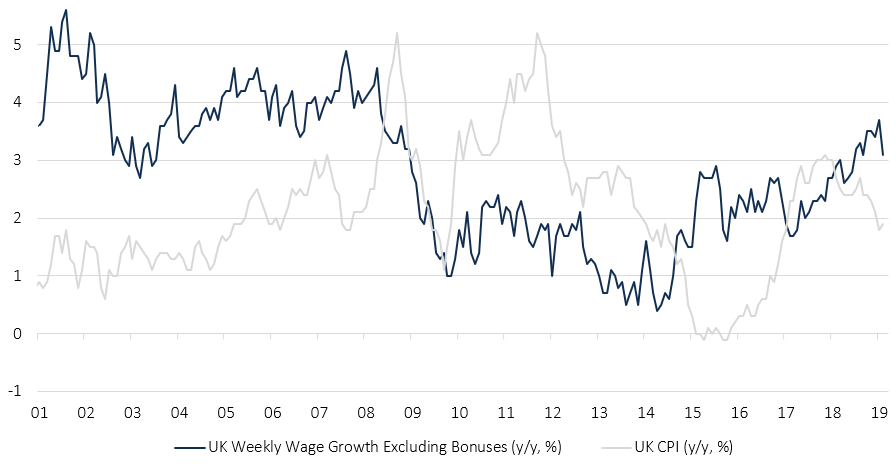 Thus “real” wages (which measure wage growth relative to inflation) are positive, helping underpin consumer spending. Retail sales, in the three months to May, rose by 1.6% versus the previous three months in terms of amount spent and volume bought.

It is not certain how the UK inflation outlook will unfold, so vigilance is always needed. UK inflation could creep higher. A tighter labour market could force wages, costs and inflation higher. Future trend growth could be low, triggering cost and inflation pressures even if the economy continues to grow at its current pace. Yet intense competitive pressures, reinforced by globalisation and technology, have keep inflation subdued in recent years. This may continue.

Globally, bond yields have fallen significantly. The UK has shared in this. The yield on 10-year gilts is currently 0.87%. This compares with recent peaks of 1.35% in mid-January and 1.73% last October. Over the last five years, 10-year UK yields have averaged 1.46%. 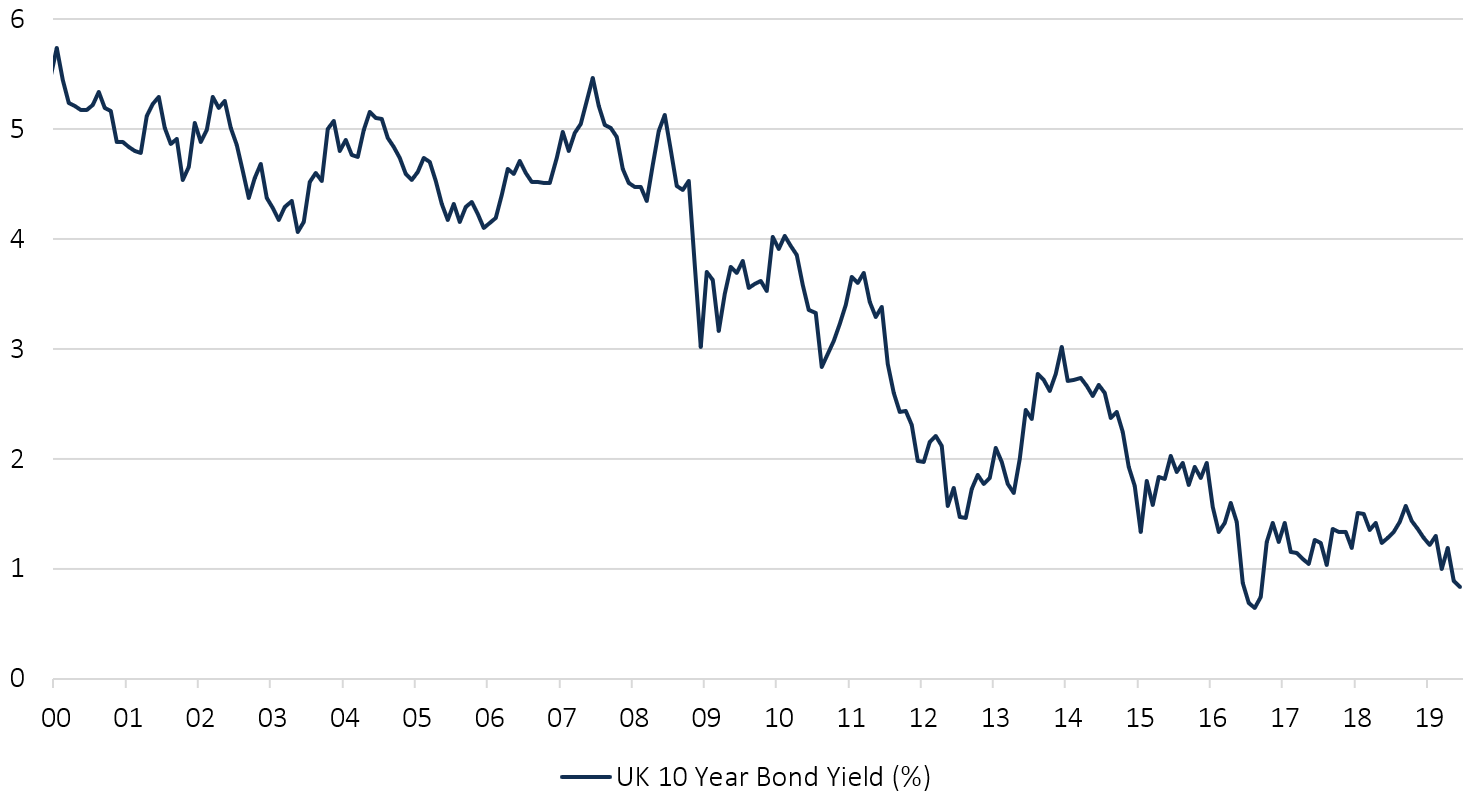 The latest decline in global bond yields reflects a number of features, notably the combination of the low worldwide inflation environment, the deceleration in global growth and the shift in monetary policy. Also, one wonders whether the lessons of Japan from recent decades (low growth, inflation, rates and yields) and the long duration of this US economic cycle is starting to weigh more on market thinking.

In this context the deceleration in bond yields is understandable, and it is no surprise the UK has shared in this, too. But there may be conflicting pressures ahead.

The combination of low rates and yields should be supportive for global growth. While in the UK the uncertainties are not just about Brexit, but also the future economic and inflation mix. In the UK domestic demand is soft. If an orderly Brexit occurs then demand may receive a boost, but so too would supply, and investment plans may rebound also.

Financial markets also need to consider whether there will be any shift in the direction of domestic policy, too.

A need for more lending?

In the last fortnight the Bank of England noted – in their response to a report on the new financial economy – that there is a need to close a £23 billion funding gap to boost lending to small and medium sized firms. More particularly, one could ask whether the capital constraints on banks need to be eased to encourage more lending to the private sector. For instance, an easing in the counter cyclical capital buffer, currently at 1%, may be needed. That is a decision for the Bank’s Financial Policy Committee.

Meanwhile, the Bank’s Monetary Policy Committee looks set to keep interest rate and QE policy on hold. But if the softness (noted above) that was seen in Q2 continues into Q3 then it may wish to have a bias to ease rates. Certainly, if there was heightened Brexit uncertainty linked to a no deal then it would need to ease, to minimise downside economic risks.

Just as the UK gilt market has shared in the decline in global bond yields, UK equities have not been immune to the global stock rebound. Idiosyncratic features, however, may now start to become the focus for UK stocks, given politics and Brexit.

As we highlighted before, it is the combination between the fundamentals, policy and confidence that is key. There are near-term challenges but many longer-term positives, too.