“The Great Lockdown” is how the Internatonal Monetary Fund (IMF) has described it, and it is hard to disagree.

On Wednesday the IMF provided their latest update on the world economy. Although not always accurate, their global forecasts have, in recent years, provided a good snapshot of how the economic consensus sees the world economy and it is likely to prove the same this time.

As shown in the below chart, the IMF sees a sharper contraction in growth this year and a slighty weaker rebound next year, compared to projections at the time of their last forecast in April. 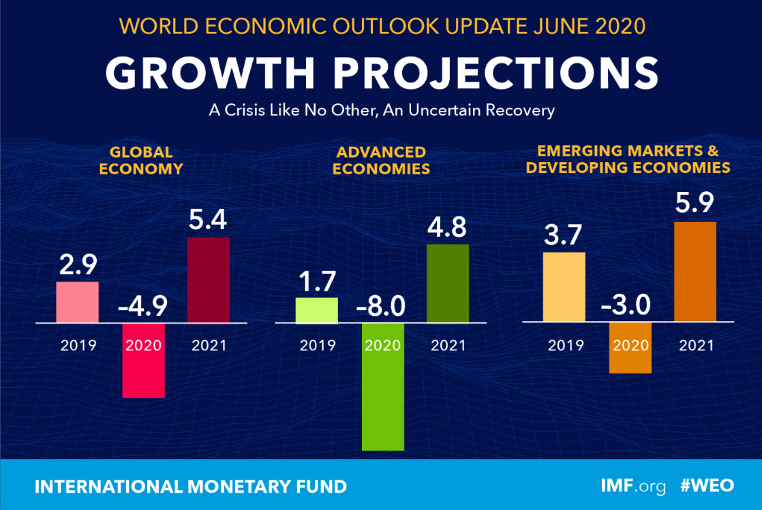 I agree with the IMF’s broad overall view. It reflects that the measures taken to contain Covid-19 – namely the lockdown – have accounted for the bulk of the downturn. At the same time, and rightly so, the IMF also acknowledges that policy measures taken across the globe have been substantial.

Policy should not be tightened at the global level


Interestingly, the IMF notes that global public debt will reach an all-time high this year; higher even than that at the end of the second world war and at the time of the global financial crisis. Notably, however, the IMF’s chief economist was keen for policy not to be tightened at the global level, citing that more may be needed in future.

This advice, while not directed at the UK specifically, should be heeded here. For us, the combination of low inflation, rates and yields points to the need to avoid austerity or tax increases and to sustain high borrowing as we emerge from this crisis. Tax cuts – including cuts in VAT to boost demand, stamp duty (to be paid by the seller, not the buyer) to revitalise the housing market, and national insurance to address concerns about unempoyment – should all be considered here in the UK.

The key to sustainable and equitable growth


The IMF is supportive of the exceptional policy stimulus seen over the last few months, and as is usually the case, talked of the need for a sound fiscal framework to reduce future debt and focus on productive, sustainable and equitable growth. The question of how to achieve this is key and one that will vary across countries.

The IMF’s projections have – in many respects – already been factored into the thinking of investors and the behaviour of financial markets. Equity markets have been strong, while bond yields have remained low. Admittedly, markets appear to be factoring in a stronger recovery than the IMF expects, but like the IMF, markets expect macro-economic policy to remain accommodative, also seeing it as difficult for policy easing to be reversed prematurely.

However, it is worth noting that even with the V-shape recovery that the IMF forecast refers to, they see 2021 GDP “some 6.5 percentage points lower” than the pre-Covid-19 projections for January 2020. This fits with the message that we have been given thus far, that ending lockdown will unleash growth but it will take some time to return to pre-crisis levels. That level may be reached by next spring in the US, but, in our view, will not be achieved until the end of next year in the UK.

That said, the IMF cited, sensibly, the high degree of uncertainty in this forecast, partcularly given the health crisis risks and possibility of a second wave. With this in mind, it is also worth noting that inflation was not flagged as an issue by the IMF and we would agree that, for now, inflation is not a problem. Whether that proves to be the case in the longer term remains to be seen.


Finally, the IMF’s forecasts for UK growth were slightly more pessimistic than the wider consensus for this year. After 1.4% growth last year, they saw a contraction of 10.2% this year and a rebound of only 6.3% next year, meaning the UK economy would remain below its pre-crisis level at the end of next year. This compares with the consensus view of a 9.1% contraction this year and a 6.2% rebound next year, based on the Treasury’s survey of forecasters.

When asked about the unemployment situation specifically, the IMF drew attention to how fast furlough schemes would be wound down and how quickly people would be absorbed back into the labour force, which would clearly depend upon the rate of recovery.

Such projections reinforce the need, in my view, for the UK to not tighten monetary or fiscal policy prematurely and for the Government to advocate a pro-growth policy in coming weeks.

An uneven and uncertain future


In the IMF’s own words, we are facing “an uneven and uncertain” global recovery but there are two additional U’s that merit attention in my view.

‘Unlimited’ in order to describe the level of global policy stimulus seen to date, and ‘unconventional’ to capture the likely style of policies needed to restore growth to stronger, sustainable rates over the longer term.