Update on the UK

For much of the last nine years since the global financial crisis, economies in the west have witnessed the three L’s of low growth, low inflation and low interest rates. The UK has, for much of this time shared in this, even though along with the US, growth has been significantly higher than in the euro area or Japan. Also, in the wake of sterling’s depreciation following the financial crisis there was a temporary spike in UK inflation. This has been repeated over the last year, but with inflation close to peaking it seems that it will spike at lower levels than it did in 2008 and 2011.

Now, global growth is rising, and the Fed has already taken the lead in raising rates to keep both inflation in check and to create a future policy buffer. This buffer, if it was then needed, would be to ease policy to counteract any future slowdown. Other central banks will follow the Fed in hiking, but they are likely to do so at their own pace, not in a uniform way.

The European Central Bank has said it will continue to add stimulus in 2018 by buying bonds, but at a slower pace than before. Meanwhile the Bank of England looks set to be the next to tighten by raising rates this coming week.

So, in western economies, growth and interest rates look set to be higher. But will inflation prove to be stubbornly higher too? According to the International Monetary Fund (IMF), in what they refer to as the “advanced economies” consumer price inflation averaged 0.3% in 2015 and 0.8% last year, and they expect this to rise to 1.7% both this year and next. So, expectations are significantly higher than in recent years, when wage growth was modest and global commodity prices were low, and are now edging towards the 2% level that generally characterises the inflation target of central banks.

Inflation is, however, one of the key uncertainties in coming years. Solid jobs growth is now becoming more evident across a wider array of economies, which could add to upward pressure on prices. Yet, globalisation is still exerting the same disinflationary forces that have kept inflation in check. If the latter is the dominant influence, then the scale of monetary policy tightening may not have to be that large.

One issue is whether the UK’s outlook will differ greatly from that facing other western economies?

A couple of weeks ago, at one of the forums I attended in Washington, I heard the UK described by a senior IMF policy maker as being the odd one out, facing “stagflation”, which is weak growth and high inflation. They see UK growth of 1.7% this year and inflation averaging 2.6% this year and next. I think that their analysis is too pessimistic, but it is indicative of a negative view some have of the UK given Brexit and domestic politics, which have added to an uncertain environment. We expect inflation to ease next year.

Growth, meanwhile, continues to be steady, albeit slightly lower than in the US and Europe. The UK economy grew by 0.4% in the July to September quarter of the year, compared with the previous three months. These were preliminary Gross Domestic Product (GDP) figures and could yet be revised but this was slightly higher than the 0.3% rate of growth seen in each of the previous two quarters. Compared with a year ago growth is up 1.5%. 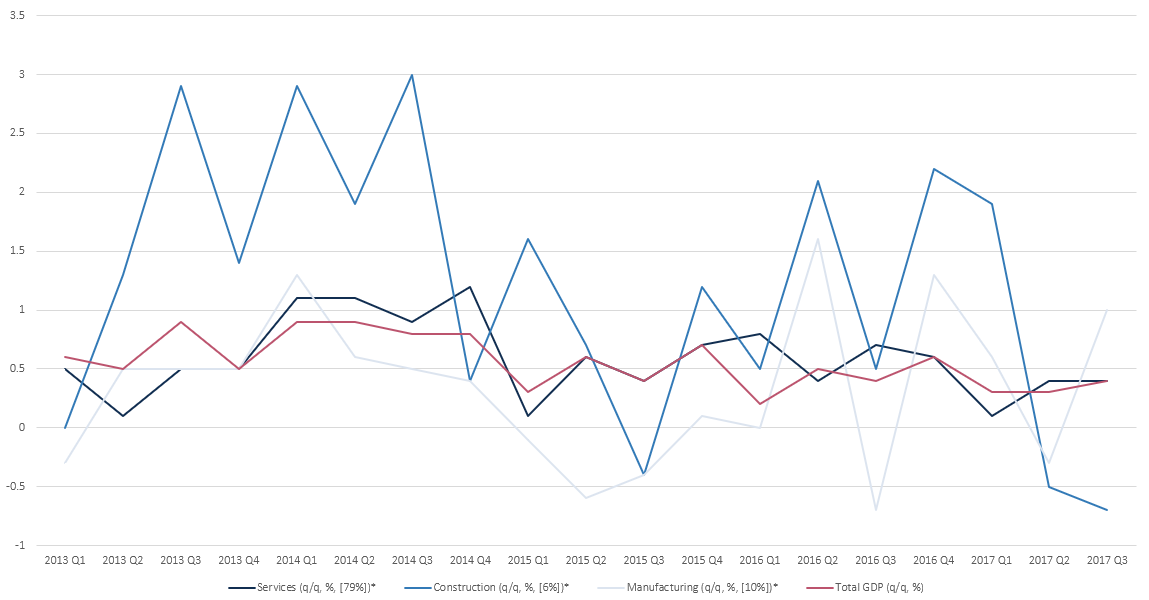 *these series indicate key components of UK GDP growth; agriculture and non-manufacturing production are excluded. The percentage in the square brackets indicates their current weight in the total GDP figure.


Construction was weak again in the third quarter and has now contracted for the previous two quarters, though this is yet to negate the strong Q1 data. Nevertheless, the dominant services sector grew steadily, while manufacturing was up solidly. The rise in manufacturing was in line with recent positive survey data and reflects the combination of sterling's depreciation and a recovery in global trade.

Steady growth is also evident in other economic indicators and it will be particularly interesting to observe monetary data in coming months, against a backdrop of potential, and most likely, actual monetary tightening. Of course, the Bank of England, as I pointed out a few weeks ago, has not mentioned the ‘M’ word of money supply in their last two quarterly Inflation Reports. Nonetheless it is a good indicator at such a potential turning point in policy. The M4 money supply measure grew 4.4% in the year to August, which, although lower than over the previous 12 months, still indicates a healthy expansion.

In addition to the Bank of England’s rate decision on November 2nd, the other major policy event of the next month is the Budget on the 22nd. Increasingly, markets are mindful of the likely forecast from the independent Office for Budget Responsibility (OBR). Their economic growth forecasts could tie the Chancellor’s hands on policy. In recent weeks it has become clear that the OBR will lower its forecast for trend growth. This would bring them more into line with the Bank of England, which has been steadily cutting its view of trend growth over the last decade and also tie in better with recent data showing the sluggish pace of productivity since the global financial crisis. A slower rate of trend growth means less of the budget deficit will be judged as cyclical (due to temporary weakness in demand) and more of it as structural (caused by long-term factors). If so this lessens the Chancellor’s ability to boost spending. It could also add to pressure on him to raise taxes, although with the tax take already high, it would be remarkable if he were to raise overall taxes further. But it does suggest that there will not be much of a fiscal boost.

In fact, the current combination of steady growth in nominal GDP (inflation plus growth), alongside low rates, is good for debt dynamics. September's budget deficit was the lowest in a decade, although the deficit for the first half of this fiscal year of £32.5 billion is only about £2.5 billion lower than the same six-month period a year earlier. The deficit this fiscal year may come in around 2% of GDP, heading in the right direction and forthcoming numbers could prove better than expected. 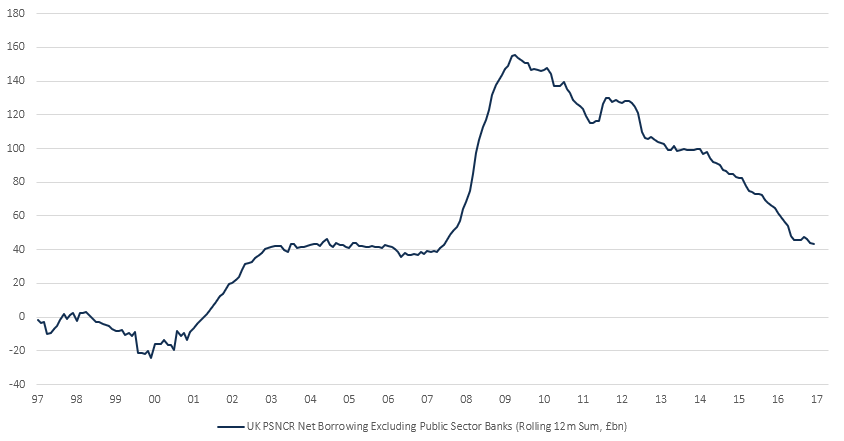 
We expect the economy to grow at a steady pace into next year, particularly after inflation peaks this quarter, as we expect it to, and then decelerates next year as the impact of sterling’s fall starts to wane. Next year the focus will be on domestic cost pressures. The question will be how the economy copes with higher rates, particularly as household borrowing is on the rise. That is a worry, although it is hard to tell whether it is a reaction to low wage growth or a reflection of consumer confidence, or both.

With no sign that the economy is contracting, a November rate hike now appears likely. However, as we have indicated before, the Bank of England should raise rates gradually and predictably. If I was there I would vote for a rise of only 0.125% but a 0.25% increase looks likely.