The US Federal Reserve has been on a path of tightening monetary policy since December 2015. We think 2018 will signify tightening of monetary policy by developed market central banks on a more synchronised basis. The Fed will continue to hike rates and reduce the size of their balance sheet and the European Central Bank (ECB) will reverse their printing of money by tapering their Asset Purchase Programme. Meanwhile the Bank of England (BoE) is likely to raise policy rates, possibly as soon as this November, reversing the emergency cut implemented following last year‘s EU referendum and they could tighten further yet gradually through 2018.

We have stressed before that the specific approaches taken towards monetary tightening could have profound and diverse impacts on asset markets.

In addition, this normalisation of monetary policy looks set to occur at a time of significant personnel changes at the top of a number of central banks. Several prominent central bankers who have been vital components in engineering the post crisis economic recovery are approaching the end of their tenures. It goes without saying that their replacements will have significant responsibility for navigating economies through the next stage of the cycle.

In this article we focus broadly on the US Federal Reserve, given the imminence of potential changes and its influence on global monetary conditions.

There are no less than three vacancies pending on the board of the Federal Reserve. The Federal Open Market Committee (FOMC) that sets US monetary policy consists of twelve members: seven board members appointed by the President (including the Chairperson), the President of the New York Fed and four presidents from the regional Feds. Currently there are only four Board members (Chairperson Janet Yellen, Jerome Powell, Randal Quarles and Lael Brainard). Additionally, and crucially, Yellen’s term is due to end in February 2018 and President Trump is due to announce his nomination for her replacement in the coming weeks. This choice could have significant implications for policy and financial markets.

The rumour mill has been working overtime in recent weeks, with five names appearing to be in consideration. The candidates (in order of current probabilities of appointment) include:

As he is a current governor at the Fed, Powell is already on the FOMC. He is viewed very much as a pragmatic, policy all-rounder. In comments that would chime well with President Trump, he has stressed the importance of increasing the US‘s sustainable growth rate and the dramatic differences that a 1% increase over time will have on peoples’ lives. When he was interviewed at the Institute for International Finance (IIF) conference last week in Washington he came across as very upbeat about the economy. Markets will likely see his nomination as a signal of ‘more of the same’ with regard to policy, since he has largely sided with Yellen and Bernanke previously.

Taylor‘s name appeared to be out of the running for the role, but he is being mentioned again, in part because he is well known to members of Congress and is seen as an establishment candidate. Best known for formulating the well-known ‘Taylor Rule’, it is likely that he would be an advocate of a more mechanistic approach to setting monetary policy, removing the need for excessive discretion which he believes has been prevalent recently at the Fed. His approach would likely push for higher interest rates, which may put him at odds with President Trump who has said previously ‘he is a low interest-rate’ person. Markets would certainly be wary of the uncertainty that would come with his nomination, however since meeting the President on 11th October, political betting site Predictit has shown a surge in support.

As the chart below shows, the Taylor rule suggests rates should be higher. We would expect a stronger dollar and higher yields at the short end of the US curve if he is nominated, perhaps pressuring portfolios with high allocations to fixed income. How the economy would cope, would remain to be seen. 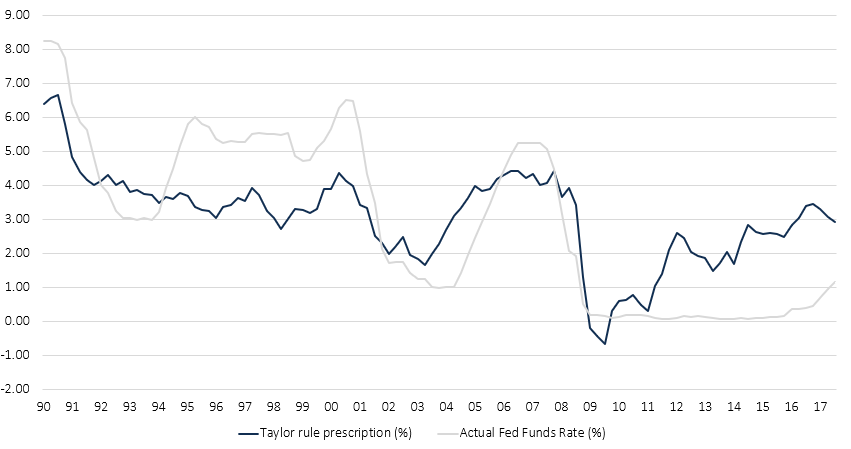 Source: Federal Reserve Board of Atlanta

When appointed as a Fed governor in 2006 Warsh was the youngest ever to take the post. After leaving in 2011, he became outspoken in his criticism of the Fed, particularly with respect to perceived ‘group-think,’ public communication and the influence that financial market movements have upon the setting of monetary policy. Markets tend to not react well to regime shifts and I imagine Warsh’s nomination would be an indication of more hawkish policy intentions than the current approach. Earlier this year he spoke of “liquidity gaps” and not “output gaps” reflecting his concern that policy was too loose. Note Warsh is married to the daughter of one of Trump’s close friends Ronald Lauder.

On one hand the incumbent Yellen could be seen as an ideal choice for President Trump, her dovish tone striking a chord with the President, keeping debt service costs low for a step-up in fiscal spending. However, on the other, throughout the campaign Trump repeatedly criticised her approach. Perhaps the fact she was chosen by former President Obama and the desire to signal a regime shift may indicate she will not be reappointed. Indeed, she hasn’t even said publicly whether she wishes to continue in the role, but if she were nominated we’d expect the initial market reaction to be positive and portfolio performance to benefit accordingly.

Currently Director of the National Economic Council and former President at Goldman Sachs, Cohn was initially touted for the top job, however since his criticism of the President’s response to the Charlottesville riots his chances of being elected have dwindled. We think it is more likely he remains at the White House, tasked with convincing Congress to pass tax reform, however a few weeks ago he was seen as the favourite, so do not be surprised if he is appointed. 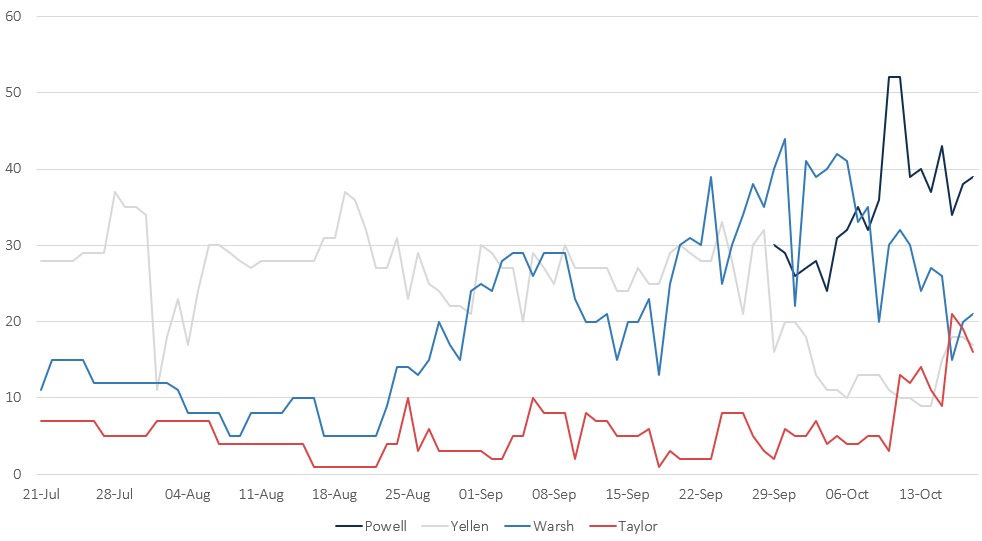 
Rest of the World

It is not just in the US where key central banking positions are under review.

Governor Kuroda of the Bank of Japan, who has overseen the large scale ‘quantitative and qualitative’ monetary easing, is due to step aside in April 2018. Whilst there is little chance of meeting the 2% inflation target during this term, there are definitely signs that the economy is picking up. An Abe victory in the upcoming general election is seen as likely giving support for a second term for Kuroda and a continuation of the extremely accommodative policy approach. Any shift from the status quo would have a significant impact on financial assets, considering that the Bank of Japan owns approximately 40% of the local bond market and 5% of the equity market.

Finally, in Europe, ECB president Draghi and BoE Governor Carney are both due to end their terms in 2019. This may seem like a while away, but no doubt focus on possible successors and the outlook for policy will heighten in 2018.

The key message is that in conjunction with analysing the macro-economic outlook for indications about the direction of future policy, we will also be keeping a close eye on the shifting composition of personnel at major central banks, and their corresponding stance to supplement our analysis in making asset allocation decisions.