The economic, financial, political and geopolitical outlook is truly uncertain. A lack of clarity in any one of these areas would be a potential cause for concern, but when the outlook for each one is opaque this compounds the challenges confronting everyone – from policy makers to investors.

That being said, while we focus below on the year ahead it is important to not lose sight of some longer-term underlying economic drivers which ultimately should be positive for global growth in future years, including the onset of AI and the fourth industrial revolution. These drivers also include the shift in the balance of power that now sees more of global growth coming from emerging economies, led by China.

In addition to these longer-term drivers another important influence is, the aftermath of the 2008 financial crisis as this has contributed to modest growth with low inflation, rates and yields across western economies. In the US, this is now the longest economic cycle in terms of continuous growth, but the overall rate of growth is low by historic standards.

Duration of US expansions 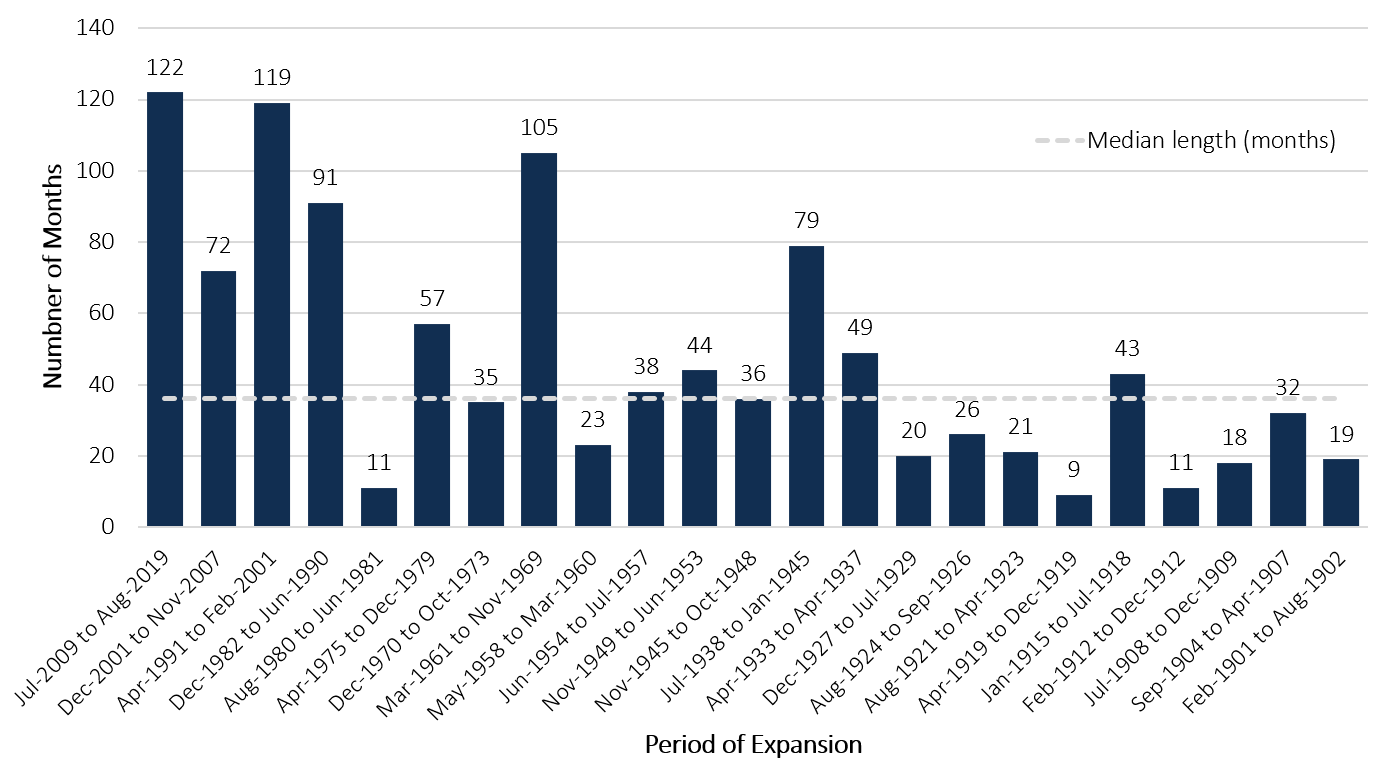 In an environment of low global inflation and policy rates, markets have performed well. But now the question is whether markets are pricing sufficiently for risk.

As we saw before the 2008 crisis there has been a persistent search for yield. Also, a considerable portion of global debt is negative yielding; this reflects worries that global growth may disappoint or that there may be renewed bouts of stress in financial markets.

It is important to be aware of these risks even though our view is that after the present global slowdown, policy easing will allow growth to stabilise as we enter the new year.

In many respects since the 2008 global financial crisis, heightened uncertainty has been a hallmark of the investment outlook. Hence the ongoing concerns that while we should not see a repeat of the 2008 crisis, there could be severe bouts of financial stress. These are genuine concerns.

Alongside this, the last decade has witnessed unconventional policies and unexpected political outcomes. What lies ahead?

Over the last year growth of the global economy has slowed. The escalating trade dispute between the US and China has been the major worry, contributing to a slowdown in global trade. A resolution to this would help global growth.

The trade dispute, particularly if it is prolonged, is expected to dent consumer spending and economic growth in China and the US. There is weakness in manufacturing and production across many economies, linked to the slowdown in trade and also underlying weakness in auto production across the globe. The worry is that this could spread to service sectors.

While this economic slowdown is a genuine cause for concern, it is important to stress that two of the factors that contributed to last year’s growth slowdown are being unwound: the tightening in global monetary policy last year, led by the US Federal Reserve (the Fed), is being reversed; and previous policy tightening in China is being relaxed.

Global growth must recover to keep debt levels in check

The focus of market attention is on the easing of global monetary policy. The Fed has cut rates twice, but portrayed the latest cut as a mid-cycle development and not, as the markets are assuming, as part of an inevitable easing cycle where policy rates will continue to fall.

In a nutshell, the Fed is not convinced they will need to keep cutting rates aggressively but further gradual easing is likely. In around fifty other economies there have been rate cuts, too, this year, notably in the euro area.

Much will also depend on inflation. For now, competitive pressures continue to keep inflation pressures at bay.

So overall, the global economy is slowing. The downside risks cannot be ignored. These include further weakening in global growth and bouts of financial market stress. But we expect significant monetary and fiscal policy easing to allow growth to stabilise as we move into the new year.

We expect modest UK growth, but much depends on Brexit clarity

Meanwhile, in the UK, the ongoing political crisis clouds the outlook. We maintain our central scenario that the UK will reach a deal with the EU and that this will be followed in coming months by a general election. Markets will continue to reflect such political uncertainty.

In the meantime, we expect modest UK growth. Growth has been volatile recently and the uncertainty associated with current politics may weigh on investment plans; indeed, industrial orders data is weak. That said, while the immediate outlook is uncertain, the economy has demonstrated considerable flexibility in recent years.

Furthermore, the government has indicated plans to stimulate growth further, although full details are yet to be outlined. Thus, we continue to factor in modest UK growth until the post Brexit outlook becomes clear.