Recent weeks have witnessed continued uncertainty and ongoing volatility across many financial markets. Not just in currency markets, as is often the case, but government bond and equity markets across the globe have experienced large swings, too.

An indication of this is shown in the chart below, demonstrating the volatility of the US government bond market. The higher the figure the greater the volatility. It is based on a weighted average of Treasury options, for two, five, ten and thirty years. 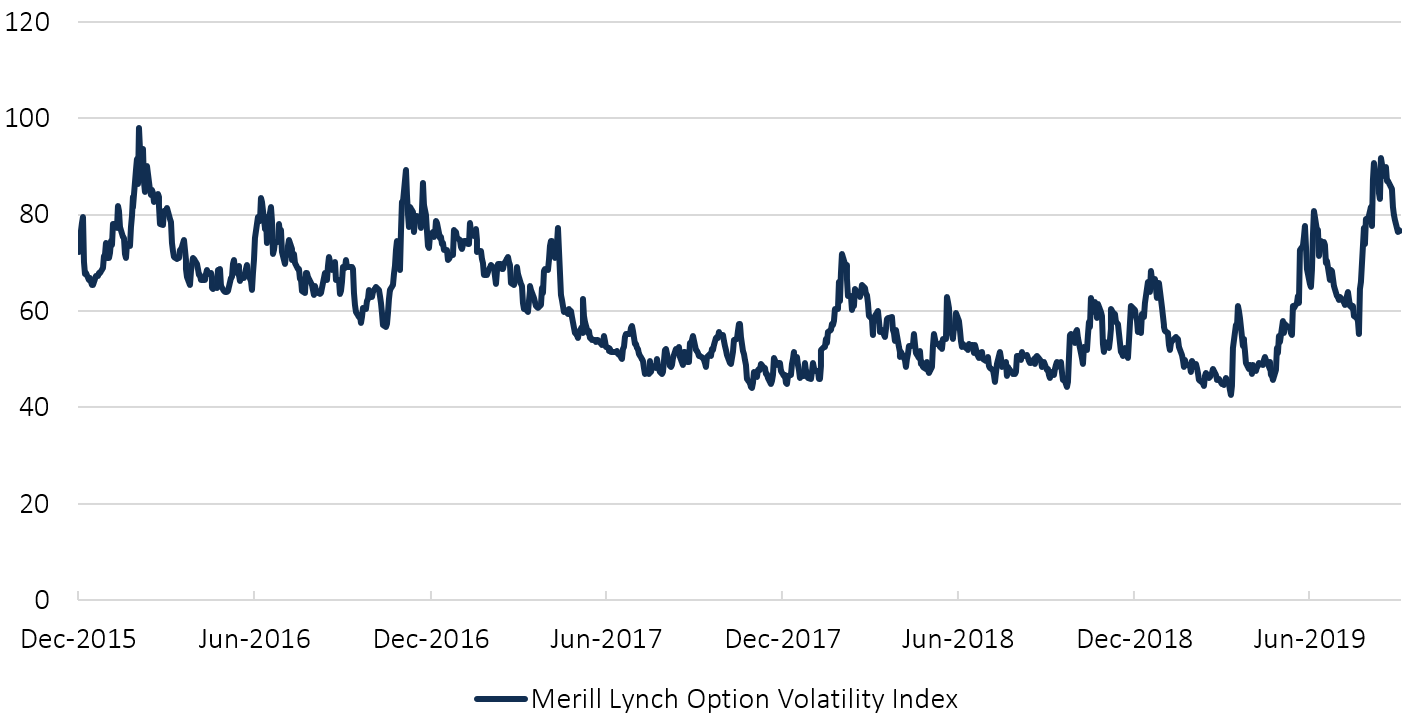 Volatility in the movement of US government bond prices, and hence in bond yields, is at its highest level since February 2016. Then, like now, the financial markets were unsure over the economic path that lay ahead. Such uncertainty is not particular to any one country, it is global.

Meanwhile, in the UK the political crisis including talk of a possible general election, alongside uncertainty over when and how the UK will exit the EU, has compounded this. As has been the case for some time, sterling has acted as the shock absorber, in response to the latest political and economic news.

Over the last month, for instance, sterling has risen 2.1% versus a strong dollar. Meanwhile the euro is down 1.6%, the yen 2.4% and the Swiss franc 2.2% in dollar terms. What then should we make of the global and UK economic picture? The answer is that it is blurred.

Conflicting economic data can often be indicative of a turning point. This exacerbates market volatility and clouds the outlook for investors and policy makers. Over the last year the world economy has slowed. It still appears fragile. However, two of the three factors that contributed to this slowdown have reversed.

The factors that could ensure global growth stability

Firstly, the US led last year’s tightening in monetary policy. Now, almost fifty countries globally have already eased monetary policy this year, with more set to follow. The latest this week was the European Central Bank, which cut the deposit rate by 0.1% to -0.5%. They also restarted QE of €20bn per month and it is an open-ended commitment, keeping open the likelihood of an easy stance for some time and with more to follow, if needed.

In addition, there is now significant fiscal policy easing, too, across a range of countries.

Meanwhile, China has loosened policy throughout this year, most recently cutting bank reserve requirements this week, aimed at boosting lending to small firms. Despite this, news that producer prices in China continue to fall highlights the still competitive global economy and alongside slower world growth has contributed to subdued global inflation expectations.

However, the third factor that led to the global slowdown, the US-China bilateral trade dispute, has yet to be resolved, although recent signs are more encouraging. That dispute – plus the feeling that the US economic cycle may be nearer its end – still weighs on global growth. Hence these offsetting factors help explain current uncertainty.

In our view, a resolution to the trade dispute, combined with the current and further global monetary and fiscal policy easing, should be sufficient to allow global growth to stabilise later this year.

Latest UK economic data has eased fears of an imminent recession. A technical recession is two successive quarters of negative economic growth. After growth of 0.5% in Q1, and contraction of 0.2% in Q2, the economy grew 0.3% in July. Since then, however, confidence measures have been weak.

Meanwhile, the latest employment data shows wages are rising well ahead of inflation, which stands at 2.1% and is likely to decelerate later this year. Total pay, including bonuses, of £542 per week was up by an annual rate of 4.2% in July and 4.0% in the three months to July.

However, in real terms (after allowing for inflation) wages are still below 2008-09.

The unemployment rate of 3.8% reflects a buoyant labour market and is indicative of the flexibility of the economy, although a slower pace of jobs growth was evident and may also reflect an economic slowdown.

While we expect modest UK growth, volatility will likely remain

Much will depend upon how confidence, spending and investment plans react as the political uncertainty unfolds. As we saw in the first half of this year, this has the potential to trigger erratic movements in the economic data. Earlier this year there was a significant impact on inventories, and now increased uncertainty may weigh on business confidence.

We also expect modest UK growth, while accepting that in coming months data may show a slower economy with erratic data because of political uncertainty.

Global policy easing should allow the world economy to stabilise later this year. That has contributed to some recent rises in bond yields from very low levels across a range of countries. Yet, with intense competitive pressures restraining inflation expectations and easier monetary policies, yields are set to stay relatively low. While that in itself provides support to equity markets, much will depend upon what happens both to the outlook for growth and corporate earnings.

Given the above, it should be no surprise that an air of caution prevails globally and in the UK. Meanwhile, the two big unknowns remain: the US-China trade dispute and the political environment in the UK.

Overall, it would not be a surprise if the recent volatility in financial markets was repeated in the face of conflicting economic data, trade and political uncertainty.