When, Who and What If?

This year’s key political event is the French Presidential election. Financial markets are already trying to assess the possibility that unexpected outcomes play out, continuing the theme of 2016. If far-right candidate Le Pen wins financial market turmoil could ensue as markets and investors weigh up the possibility of a euro collapse. This note summarises some of the key issues and possible market impact.

The election has two stages. The first round is on Sunday 23rd April. Any candidate is welcome to run in this round, assuming they have received the required number of signed nominations from elected officials. The field is then narrowed to the two candidates with the most votes in round one proceeding to the final round, a fortnight later, on Sunday 7th May. Then, whoever achieves a simple majority will be elected President.

The risk of cohabitation

France also has parliamentary elections on Sunday June 11th and 18th. These are less important than the Presidential elections but could assume greater importance were Le Pen to win. The results of these will dictate whether the President can obtain a parliamentary majority, or whether a so-called period of ‘cohabitation’ will ensue. If the President is unable to win an outright majority, he or she will have to appoint a Prime Minister who is acceptable to parliament - therefore from an opposing political party – and the two will have to work together in ‘cohabitation’.

In this situation the President tends to control foreign policy and defence, while the Prime Minister looks after internal affairs. Cohabitation has occurred only three times in French history. In 1997 right-wing President Jacques Chirac was forced to appoint left-wing Prime Minister Lionel Jospin. This resulted in five years of what Chirac called ‘paralysis’, during which the Socialist Party pushed through several reforms against his will, including the much-maligned 35-hour week.

Leader of the far right ‘National Front’ party established by her father, Jean-Marie Le Pen, Marine Le Pen is looking to capitalise on the wave of global populism. Whilst she has softened the party’s stance in an appeal to mainstream voters, anti-immigration and anti-Europe tones are still front and centre in her manifesto. She claimed “the divide is no longer between the left and right, but between patriots and globalists!” as she launched her campaign on Sunday 5th February.

Of the 144 proposals published, key commitments are detailed below:

• Reform of EU membership within a six-month time horizon, else initiate a referendum on membership
• Regain France’s monetary sovereignty
• Forbid undocumented immigrants from legalising their stay and prohibit their access to free healthcare
• Curb immigration to 10,000 a year (currently in excess of 200,000)
• Implement a tax on firms who hire foreigners
• Force retailers to hold a certain percentage of French goods on their shelves
• Hire 15,000 policemen, increase jail capacity by 40,000
• Leave NATO
• Cut taxes for households and SMEs and increase welfare benefits.
• Lower retirement age to 60, maintain the 35-hour working week and make overtime tax free.

Financial markets are most concerned about a Le Pen victory. France has always played a central EU role. Le Pen, with her aim to reintroduce the franc, would call that into question. Leaving a currency union is not easy. While reintroducing the franc would take time, markets would discount the implications.

Formerly an investment banker, Emmanuel Macron shot into the political limelight when he was appointed as Deputy Secretary General by Francois Hollande in 2012. In 2014 he became the Minister of Economy, Industry and Digital Affairs, where he proposed several business friendly reforms that were forced through parliament.

He left his role and the Socialist Party last year to set up his own independent party En Marche or ‘On The Move’. Whilst many in the Socialist Party hold a hostile view of him, the significant support (150,000 party members) he has already garnered puts him in a strong position, especially given the corruption allegations engulfing Mr Fillon’s campaign.

Macron is a centrist who is looking to unify France. In a recent key speech he announced, “I am not going to say that the left or right is meaningless, that they are the same thing, but are these divisions not a hurdle? I want to reconcile the two Frances that have been growing apart for too long."

Macron has promised to release his manifesto by the end of February. Current polls suggest his youthful exuberance may appeal to a public rejecting traditional candidates. However, as election day approaches, expect more scrutiny of his policies and lack of experience.

The Republican Party’s candidate has been a long-standing figure in French politics, serving as Prime Minister under Nicolas Sarkozy from 2007 to 2012. He surprisingly defeated Sarkozy and the popular Alain Juppé in the 2016 primary for the Republican Party nomination. His key policies are:

• Scrap the 35 hour working week, instating the EU maximum of 48 hours
• Cut up to 600,000 jobs in the civil service
• Raise the retirement age to 65
• Cut taxes for households and reduce business levies
• Form a Western coalition to fight ISIS with Putin’s Russia

Fillon is pro-EU and would adopt a hardline approach to Brexit. In a speech five days after the referendum he said “the divorce must be serene but it should be fast.” He has highlighted benefits he thinks Britain will have to forego as a result of leaving the EU, such as the European financial passport. This enables UK-based financial firms to service other EU countries without the need for separate authorisation in each country.

Nevertheless, allegations that Fillon paid his English-born wife, Penelope, public money for a job as an aide she never carried out have hit his prospects hard, with recent polls suggesting support is severely diminished. Some commentators have called for his withdrawal, which would be unprecedented in French political history. However, he has vowed to continue.

Benoît Hamon surprisingly won the Socialist primary, defeating former Prime Minister Manuel Valls with a 58% majority. He positions himself on the left, backing policies to generate a universal monthly income for all citizens, invest in renewable energy and legalise cannabis.

Another left-wing candidate, Mélenchon previously held office as a member of the Socialist party in the early 2000s. He left in 2008 to found the ‘Left Front,’ the party he represented in the 2012 election, coming in fourth in the first round. Last year he created a new movement called ‘La France Insoumise’ which translates as ‘Rebellious France.’ He is a critic of globalisation, the EU, NATO and nuclear power and supports the mass redistribution of wealth and the legality of same-sex marriage and euthanasia.

Both Hamon and Mélenchon are seen as outsiders in the first round. However, with polls as tight as they are, a big swing from one to the other could result in an unexpected run-off between far left and far right in the second round.

Marine Le Pen leads polls for the first voting round. However, regardless of who her second-round opponent will be, polls suggest she will then suffer defeat. That said, events of the last 12 months may have increased scepticism of polls and with nearly three months to go before the second round, there could be big shifts in these numbers ahead. 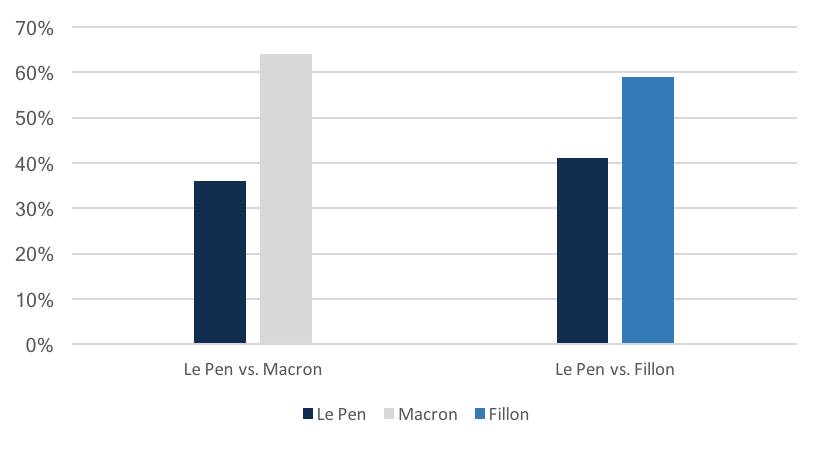 It is not uncommon for an alternative candidate to make it through the first round before losing in the second, as voters tend to club together and vote for the candidate they dislike the least. For example, Jean-Marie Le Pen received only 17.8% of the vote in the second round in 2002 despite receiving 16.9% in the first.

Historical 1st and 2nd Round Margins of Victory 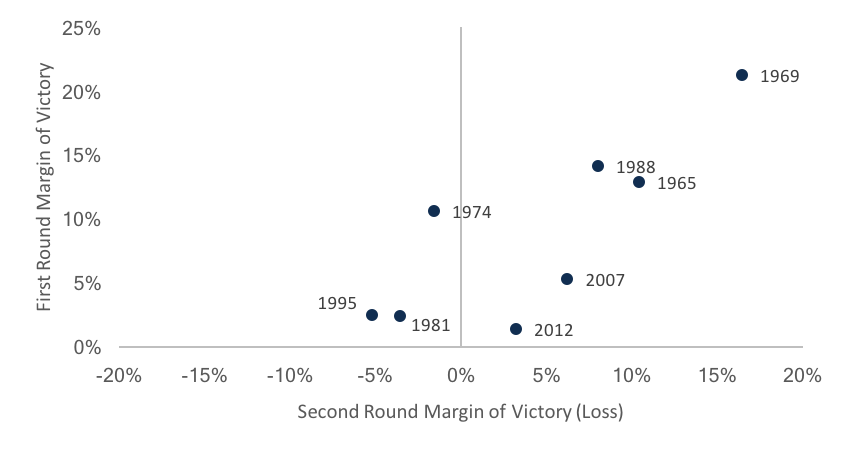 Can Le Pen win? Whilst there would be several political and legal hurdles to overcome, question marks over a possible French EU exit and, as such, the Eurozone’s future will arise. This would likely lead to a weaker Euro, the continuation of widening sovereign bond spreads over Bunds and continued higher volatility in the peripheral bond markets. Furthermore, we would expect equity weakness, particularly in bank stocks and peripheral markets where contagion may occur. There is a strong argument that this would have a bigger market consequence than the Brexit referendum and US election result.

The French public do not appear to want to lose the euro. It is possible a Le Pen victory could trigger a wider, and much needed, debate about the euro. Elections in March in the Netherlands and later this year in Germany will also have an impact. One option would be to move to a two tier euro: a "hard euro" centred on Germany and consisting of largely Northern European economies, and a "softer euro" consisting of the rest. But it would lead to a period of near-term uncertainty.

If Le Pen were to win but not gain a majority then cohabitation could lead to a period of policy impasse, which at least prevents her from implementing some of her more market disruptive policies, although it would stall the reform agenda France so desperately needs. However, Article 11 of the Constitution does allow for the President to call a referendum without parliamentary approval, a precedent set by de Gaulle in 1962 and 1969.

Polls are sceptical of Le Pen’s chances. If she were defeated, in the immediate aftermath it is likely the removal of uncertainty premia would boost equity markets and the Euro. Furthermore, if the victor gains a parliamentary majority and is able to enact their agenda, along with the improving European economic data we’ve seen so far this year, there could be further upside for French and European stocks.

2016 illustrates that excessive complacency surrounding political events can affect markets and not always in the manner expected. While a 2016 Eurobarometer survey showed French support for the euro of close to 70%, opinions about the EU were more mixed.

At Netwealth we’ve maintained an underweight to European sovereign bonds. We believe current yields are not sufficient compensation for political uncertainty and volatility. Also, we think that if no adverse outcomes ensue, the positive economic tones coming from the Continent will give the ECB licence gradually to step back from extra-loose monetary policy. We adopt a more neutral position in European equities as we think there is a strong valuation case for maintaining exposure over the longer-term. However, we will continue to monitor developments and will take steps to mitigate market risk if necessary.