UK inflation continues to decelerate. The latest data, released last week, showed the annual rate of consumer price inflation falling to 1.5% in the year to October, from 1.7% in September. The likelihood is that the annual rate will fall significantly further, based both on the analysis from the Bank of England’s latest Monetary Policy Report and the view of most economists, including ourselves.

Inflation could decelerate towards 1% over the next six months. This is already influencing market expectations that policy rates will fall and then stay low. But such a cut is not certain.

As the Bank of England report stated, the annual rate of inflation, which averaged 1.8% in Q3, is expected “to decline to around 1.25% by the spring” and average 1.2% in Q2 next year. As always, there are offsetting factors, with unit labour costs rising and core service sector inflation having reached a two and a half year high of 2.5%. 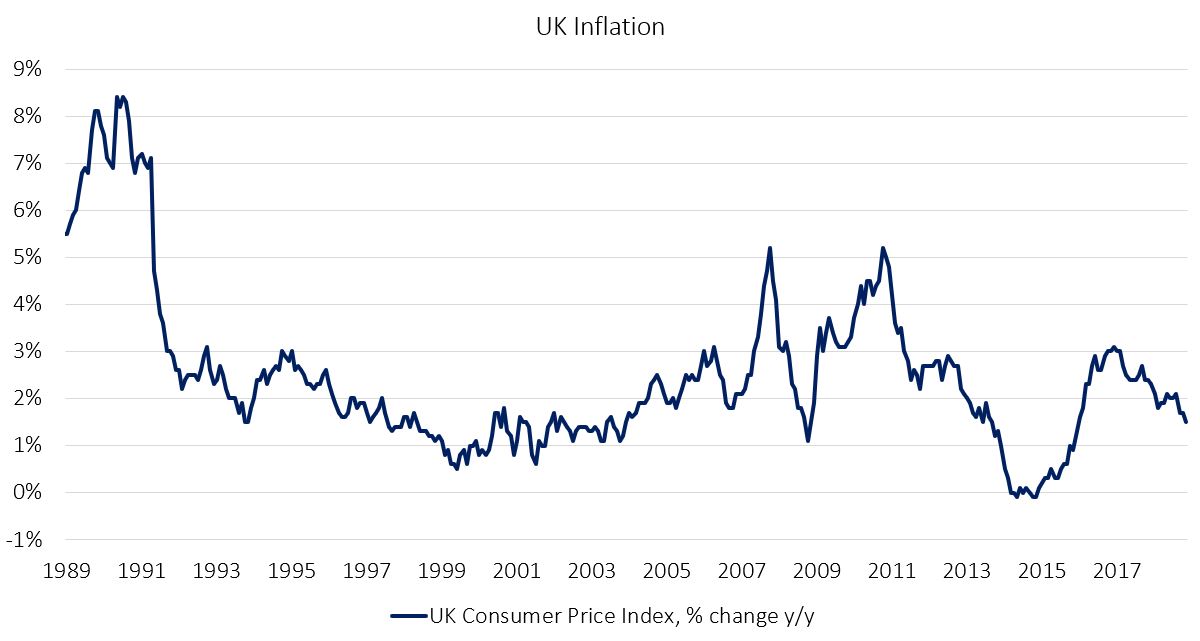 There has been a gradual pass through of the previous strong increase in pay growth of recent years. In contrast, goods price inflation has been weaker, and pay growth is expected to decelerate, in line with the recent slowing in employment growth.

Looking further ahead, the Bank expects inflation to remain below its 2% target over the next year. Their forecast points to 1.5% in Q4 next year. The Bank also predicts a gradual acceleration in economic growth to 2.1% by 2022 while the market expects policy rates to remain below the current 0.75% level over the forecast horizon. As a result, the Bank sees inflation rising to 2% by Q4, 2021 and 2.2% by Q4, 2022 as stronger economic growth leads to excess demand and domestic inflation builds.

Although the easing inflation environment gives the Bank scope to cut interest rates, the Monetary Policy Committee is likely to wait to assess overall economic data in the wake of the election.

UK economic activity is likely to be impacted by the election result, given the divergent policy stances on offer from the major parties, both on Brexit and domestic policy. We will be releasing a separate comment on this following the launch of the manifestos. The economy looks set to grow around 1% this year, with a modest and erratic profile of growth during the course of 2019.

Fears of a global recession have subsided

Meanwhile, the external environment is providing a more constructive growth backdrop, having witnessed a significant change in recent months. Market fears of an imminent global recession have now been replaced by the expectation of a stabilisation and then modest pick-up in global growth.

We have highlighted this recently, citing the easing in global monetary and fiscal policy. As the IMF stated in its October global outlook, “The absence of inflationary pressures has led major central banks to move preemptively to reduce downside risks to growth and to prevent de-anchoring of inflation expectations, in turn supporting buoyant financial conditions.”

Structural changes also suggest central banks can fear less the inflation feedthrough from rising wages. As the IMF noted last week, since the global financial crisis there has been a weaker pass through of higher wages into overall inflation. Their focus was on the euro area but the same generic argument appears to apply elsewhere, as intense competitive pressure, robust corporate profitability and subdued inflation expectations combine to keep headline inflation low.

Inflation likely to vary from region to region

Low inflation (sometimes called ‘loflation’) was a focus a few years ago. The issue is whether it will become so again. The likelihood is that the issue will vary from region to region. It certainly seems that we remain in a disinflationary environment. Intense global competitive pressures reflect this.

In 2020, as policy easing allows global growth to pick-up from the recent lull, inflation is likely to be one of the key market focuses: whether inflation pressures may reappear or whether inflation will stay low. As things stand it is the latter that appears more likely.