The Latest Economic Update from the IMF

Overnight the International Monetary Fund (IMF) provided an update of their global economic outlook. Although the IMF is not a great forecaster, we take it seriously because it is an indicator of where benchmark thinking is on global growth. The IMF has stuck with its previous forecast made in April, where it sees solid global growth this year and next. Last year the world economy grew 3.2%. The IMF expects 3.5% growth this year and 3.6% next. Just as importantly, the IMF now expects a significant increase in the volume of world trade, up from 2.3% growth last year to 4% this and 3.9% next.


In recent years it has been the weakness of global trade that has underpinned some pessimistic forecasts about the global outlook. So if trade is now rising solidly this is a good sign. Also, it should be very positive for UK exports, which have grown more strongly over the last year than generally expected. However, as we show in the graph, UK exporters have taken advantage of the weaker pound to boost their export margins and earnings, rather than to keep prices down and boost volumes. And thus it will be interesting to see whether export volumes now start to rise, as the world economy grows.

The IMF raised their forecasts for growth in China, Japan and the euro area, while cutting them slightly for the US and UK. Having been pessimistic in recent years, the IMF now says that risks are broadly balanced in the near-term but the high valuations of financial markets makes them nervous about a market correction and leads them to say risks are skewed to the downside in the medium-term.

Notwithstanding that, the factor that will likely attract most attention here in the UK was a downward revision by the IMF to UK economic growth and an upward revision to forecasts for the euro area. The latter is to be welcome and should not be a surprise; the European Central Bank has pumped huge amounts into the euro area economy, which is also at an early stage of the economic cycle, having been weak for so long. The IMF sees euro area growth of 1.9% this year and 1.7% next. This is to be welcome and is in line with our thinking, but still does not disguise deep structural flaws and big regional imbalances across the euro area. But solid euro area growth should continue.

As for the UK, the IMF cut this year's growth forecast by 0.2% to 1.7% and kept it unchanged at 1.5% next. The downward revision for this year is because the growth figure already released for the first quarter was weaker than had been expected: up 0.2% on the previous quarter. Since then even the Bank of England has predicted growth rising to 0.4% in the second quarter. Last July and in July 2015 the IMF also cut UK growth forecasts, so a reduction now is not an exception.

UK Economy to keep growing but at slower pace

Over the last year economic forecasts of the UK have proved too pessimistic. The weaker pound has helped, as indeed it should have done, as sterling was overvalued previously. The Bank of England's easing last autumn was expected by us, but its impact should not be exaggerated as there was solid monetary growth even as it eased.

The IMF's forecasts for the UK, while weaker than ours, also probably reflect the mixed picture we have seen since the election. This has led to a spilt decision on the Bank of England's Monetary Policy Committee, as well as to some slight tightening by the Financial Policy Committee. We see growth around 2% this year and next. In the spring Budget the independent Office for Budget Responsibility predicted 2% this year and 1.6% next.  Indeed, after seven years of solid growth it would be no surprise if the UK economy slowed slightly, as that is the way economies operate.

Latest data shows unemployment is at a 42-year low, hiring in The City is up 17% in the year to June despite some firms boosting operations elsewhere in the EU, and on a recently released investment index from the management consultants A.T. Kearney the UK has risen from 5th to 4th. All this is good. Of course, the outlook for any economy depends upon the interaction between the fundamentals, policy and confidence - with the latter, confidence, remaining important, especially for investment plans. 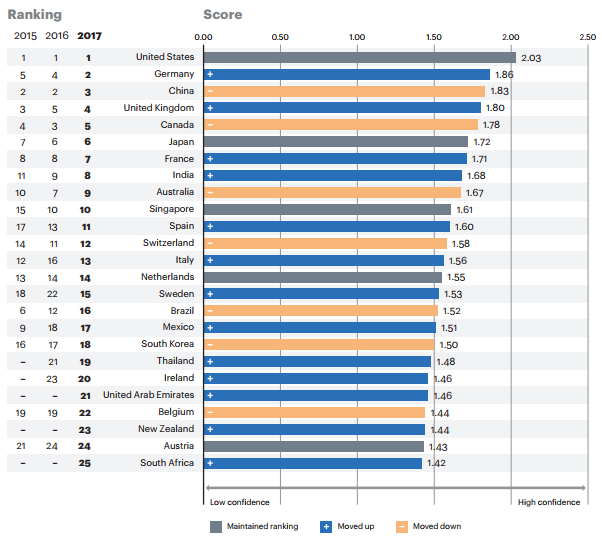 Note: Values are calculated on a 0 to 3 scale, with 3 being the highest level of confidence in a market as a future destination for FDI.

Even though we see 2% growth, it would not be a shock if the economy were to be softer towards year-end and early next. Real incomes are being squeezed, and clearly the IMF has taken that into account in their forecast, but as we move through next year real incomes are likely to be rising, which will be positive. It is often overlooked that the rise in inflation from last June to this spring was seen globally, rising in the US, Germany and the euro area, among others, not just here. Since spring, inflation has eased globally but because of the pound, rose further here. UK inflation fell last month, although the peak may be seen this third quarter, after which inflation here should follow the global trend and decelerate. If so then this will ease the squeeze on real incomes and boost consumer spending next year. Indeed today the IMF said that globally, inflation pressures are muted, core inflation is low and wage pressures are subdued. If so then this would imply no aggressive monetary tightening.

The outlook depends upon many factors, including our exit negotiations and future relationship with the EU. It also depends upon our trade with the rest of the world where we should be optimistic given the outlook for global growth and that we can trade freely and easily under the WTO. And it depends upon the domestic economy and the UK using its new found freedom after Brexit to boost infrastructure, investment and innovation. This is not the time to be overly pessimistic, but instead a sense of realism is needed about near-term challenges and optimism about longer-term opportunities.