Mark Twain and the Outlook for UK House Prices

What is happening to the UK housing market? For some time it has been easy to think that in the UK there were three things you could be sure of: death, taxes and rising house prices. The first two will always be with us, but what about rising house prices?

The extent to which rising house prices have become part of the British DNA is seen in chart 1, which shows the rising trend of house prices going back to the early 1950s. After a slow start, it almost appears to be a one-way bet. In fact, house prices have only fallen twice in the post war period, in the early 1990’s recession and immediately following the 2008 financial crisis, but both setbacks were soon reversed. Recently, house price inflation has slowed. 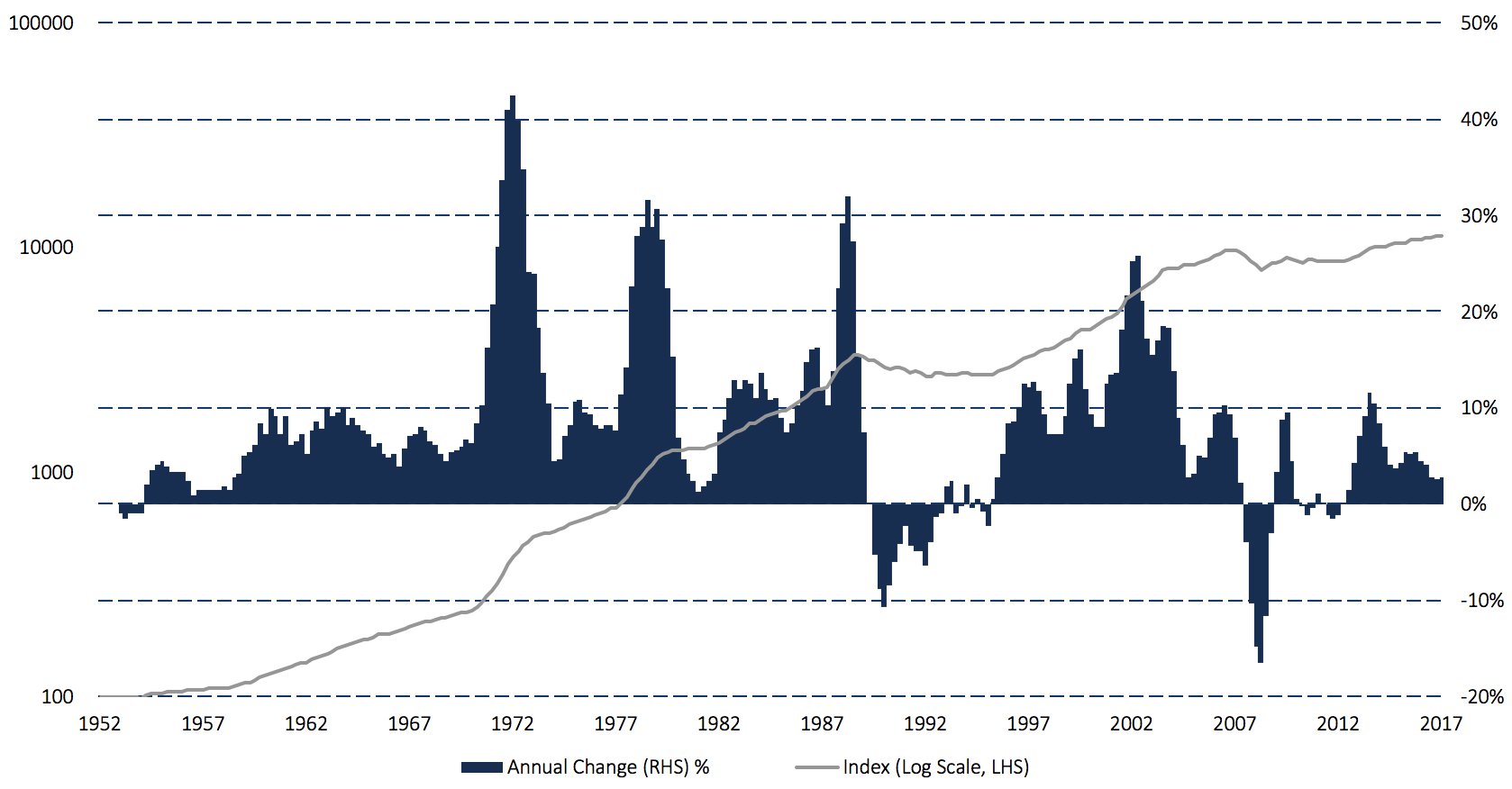 House prices are influenced by many factors and here we focus on three key ones: affordability, the interaction between demand and supply, and policy.

The most cited measure of affordability is the ratio of house prices to earnings, shown in chart 2. Here, too, the trend has been up for some time. Nationwide data is shown, but the figures for London are far higher, at exorbitant levels.

This is a huge obstacle for many and ensures that access to finance is increasingly a major driver of the property market. It helps explain why the average age of first-time buyers is rising and the number of renters is increasing. 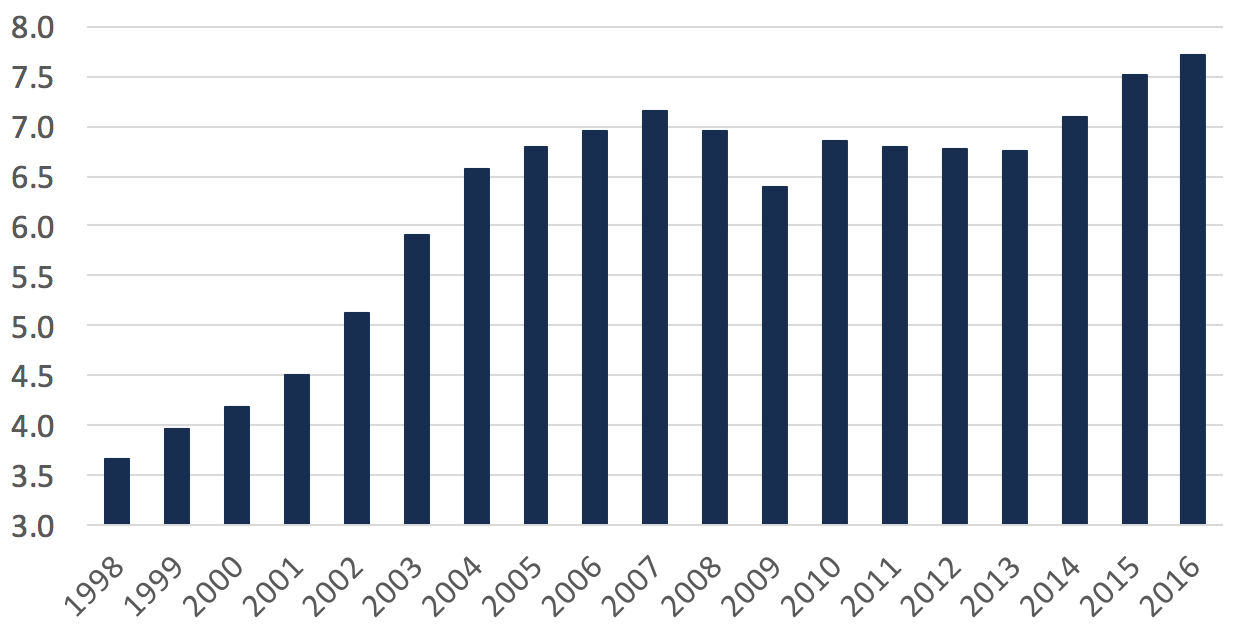 Using the census as a guide, in 2011 the proportion of owner occupiers was 50%, those in private rented accommodation was 25% and social rented housing comprised 24% of all households. A household is not the same as a family, and ranges from single people living alone, up to large families.

While attention is often focused on the first-time buyer, the first-time mover, too, is key. That is, while building new homes is vital, it is also important to encourage turnover in the market, unleashing the supply of second hand or existing homes. It has been reported that turnover in the second hand property market has halved across the UK over the last 30 years, and this is an issue if it continues.

Meanwhile, with the pound weaker, London has become a desirable destination for international investors to buy property: their focus is largely central London, where the combination of local supply and global demand keeps prices high. This has been called the “buy-to-leave” market, to differentiate it from the UK’s “buy-to-let”.

Attitudes towards housing could be heavily influenced, too, by its future taxation. The current taxation of housing not only adds to the cost, but also has deterred turnover. In 2011 the Mirrlees Review of taxation said, “The taxation of housing is a mess. Council tax is still based on 1991 valuations and is unnecessarily regressive. Stamp duty is among the most inefficient and damaging of all taxes. And renting is needlessly penalised by the tax system. Stamp duty should be abolished and council tax reformed so that payments are based on up to date values.” Since then, stamp duty has risen for higher valued properties, deterring turnover.

There has already been a change in the treatment of the taxation of buy-to-let properties. Globalisation points to the challenge of taxing areas that are mobile – such as multinationals and highly skilled workers – but there is also a growing attraction to tax even more areas such as housing, which clearly are not mobile. Also, in time inheritance tax could change, with the tax being paid by the recipient and not the estate of the deceased, with as yet unanticipated consequences for housing.

The interaction between demand and supply

The supply and demand dynamics highlight the crisis. The UK builds too few new dwellings and does not encourage enough turnover in the secondary market. This has created a massive shortfall which is likely to get worse unless there is a major house building programme, particularly as the population is set to rise, with Britain expected to have the largest population in Western Europe within decades.

Chart 3 shows the rate of house building in the UK. In 2004 the Barker Review on housing drew attention to the need to build about 240,000 units per year, a figure that had not been achieved since the late 1970s. Since then, not only has supply disappointed but demand has continued to rise. For instance, migration alone has added a net population rise of 252,000 every year from 2004-16 – which is equivalent to a city the size of Newcastle each year.

Also, the number of households continues to rise. A government report in 2011 talked of 232,000 new households each year. Consequently there is a persistent shortfall, calculated by the LSE’s Professor Paul Cheshire as a chronic shortage of 2.3 million units. So not only does this shortfall have to be addressed, but also future supply needs to increase. 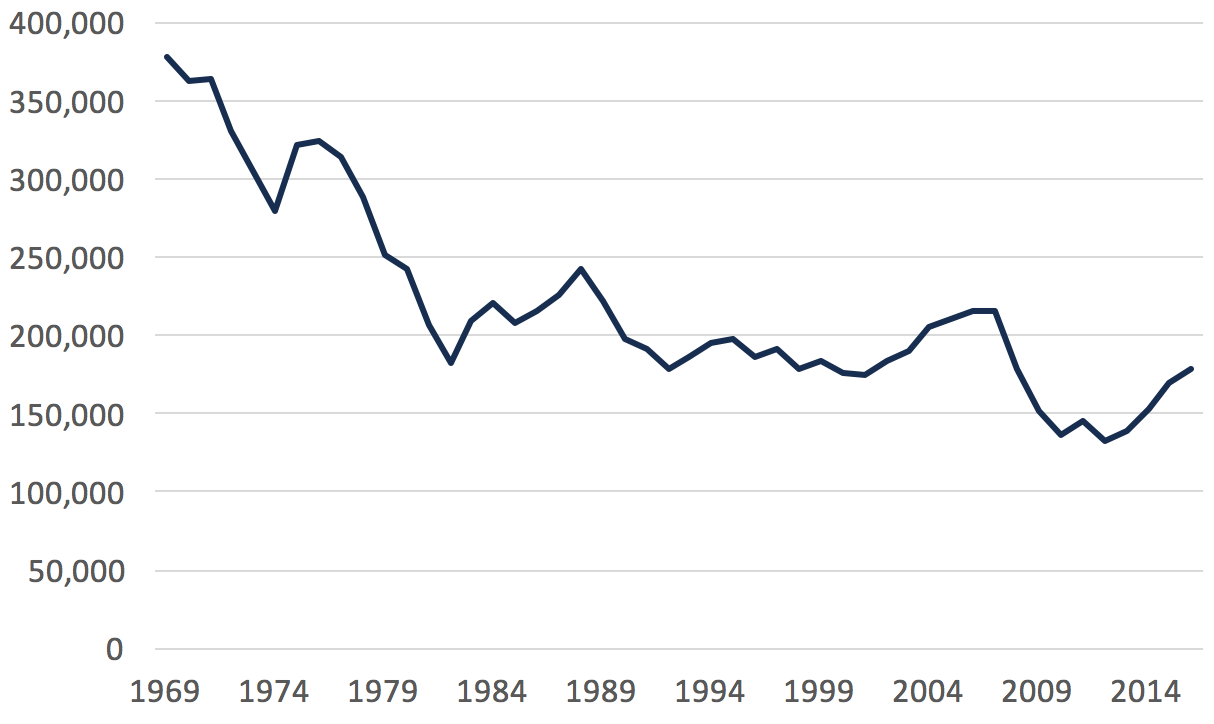 In recent decades the mantra of Mark Twain to “Buy land, they’re not making it anymore” would have worked. But now new supply has to be central to the policy response. Indeed, the influx of private investment points to not just buying of property but also to the funding of a raft of high rise dwellings across London and other cities. There is also encroachment on to the Green Belt already.

Additionally, in the wake of the financial crisis when monetary policy was relaxed, housing has benefited from a lethal combination of cheap money, leverage and one-way expectations. This has led to people increasing their borrowings but being able to afford it, based on interest rates being low.

Traditionally, the housing market stuttered or suffered if interest rates or unemployment rose. The labour market is currently very healthy, but wage growth has been sluggish. Wage growth may outstrip inflation over the remainder of the year, but beyond that it is hard to say, as technology and other influences come into play.

The combination of MIP, MAP and MOP is having an influence on housing now, with MIP and MAP referring to micro and macro-prudential policies aimed at curbing excessive lending to individuals through, for instance, caps on loan to values, among others. Monetary policy (MOP), meanwhile, refers to the tightening of lending conditions.

The ending of the Funding for Lending Scheme earlier this year should limit the supply of some of the availability of cheap finance. What is key will be interest rates. Despite all the “noise” around monetary policy from the Bank of England – not helped by numerous official speeches and comments and by inaccurate forward guidance – the signal is that policy rates will stay low, rise gradually and peak at a low level.

The combination of affordability, supply and demand and policy will be the key drivers of house prices. As one can see, with the level of house prices as well as renting rates already high, the outlook is by no means clear-cut. Housing is clearly needed to live in. The days when it was an investment, too, may soon be coming to an end. This is another factor that adds to the attractions of discretionary wealth management and investment for the long term, as we continue to highlight in our portfolio approach.