Regular readers will know that for the past three years we have broadcast our views on the global economy on these pages. Broadly speaking, we have remained reasonably positive on the outlook and have been vindicated in our stance. However, more recently we have been closely monitoring the slowing global economy and the impact of the changing political and policy environment. There are now signs that there is heightened uncertainty about what lies ahead.

The global economy is slowing

If we look at purchasing manager indices as a proxy for global activity, we can see evidence of the slowdown. In fact, the manufacturing component is already in recessionary (below 50) territory. Historically, manufacturing has led the services component, so it will be vital to monitor whether conditions deteriorate further as the year goes on.

A partial explanation for the marked slowdown in manufacturing – and the disconnect with services – is the exogenous shock caused by the escalation of trade disputes, particularly between the US and China. If we look at the regional components, we see that very few major economies are expanding, and the direction of travel is not encouraging. 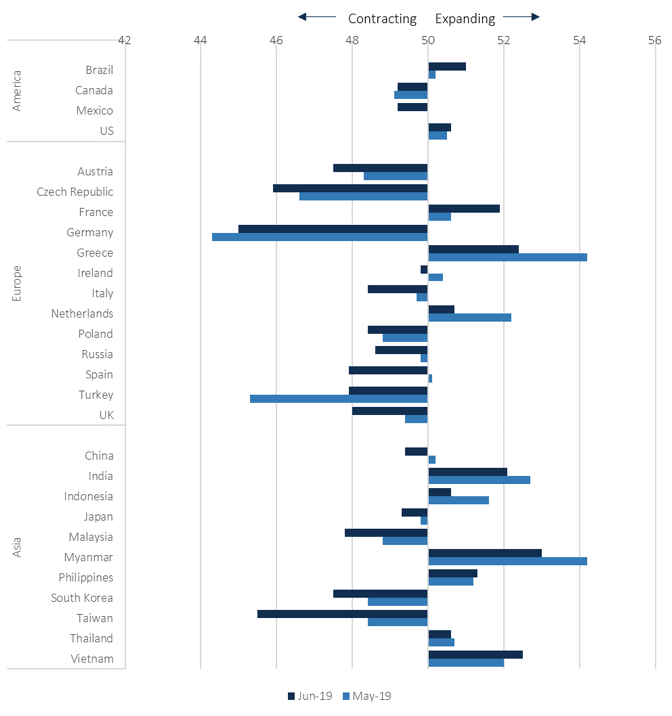 Nevertheless, equity markets have been boosted by the prospect of easing global monetary policy and, indeed, lower interest rates have already bolstered investor sentiment. However, we think that improving economic fundamentals will be required to deliver the earnings growth expectations that are baked into current price levels. There is some evidence that Chinese efforts to provide stimulus are already helping on this front, but economic momentum can be hard to shift.

Naturally, another key factor influencing portfolio returns is the domestic policy agenda within the UK now that Prime Minister Johnson has taken office. The market has perceived his choice of cabinet members and early indications of his negotiating stance with the EU as increasing the probability of a no deal Brexit. Accordingly, sterling has weakened sharply.

The PM has made clear his desire to leave the EU at the end of October, ideally in an orderly way but, if not, then without a deal. One of the many issues for the market is whether being better prepared for a no deal will increase the pressure on the EU and thus improve the likelihood of leaving in an orderly manner, namely moving to a period after October where the UK remains in the customs union and single market while a new trade relationship is agreed. The challenge is that the likely route to be taken may not become clear for some time and this uncertainty has added to downward pressure on sterling.

At Netwealth, we aim to construct high quality, globally diversified investment portfolios that are not excessively exposed to one individual factor. Our approach to Brexit would be a good example of this cautious stance.

We have not ‘chosen a lane’ by positioning our portfolios so that they perform well in one particular outcome, and suffer in the event of an alternative outcome. Rather, we have balanced the portfolios with assets that we believe will perform well in different circumstances.

Specifically, within equities we have reduced exposure to UK stocks in total, given their high proportional weighting in our strategic allocations. Additionally, we have tilted more of the UK investments towards the more domestically focused stocks of the FTSE 250 Index, which we feel will rebound strongly in the event of a satisfactory Brexit deal.

Conversely, we have reallocated away from the holdings in the FTSE 100 into a combination of unhedged international equities, which would benefit from the weakening of the pound in a No Deal outcome, and hedged US equity exposure to reduce portfolio volatility.

In fixed income, we have maintained reasonably high levels of sensitivity to interest rates within portfolios. This has already delivered positive contributions as bond yields have declined in step with the slowing global economy. However, in lower risk portfolios we have recently reduced exposure to UK inflation-linked bonds for the following reasons:

Undoubtedly, Brexit will continue to dominate the domestic headlines as we approach the October deadline and UK assets are likely to remain volatile. However, as we have outlined above, global as well as domestic factors, are also important in determining future portfolio returns, just as they have been in the past.

A positive risk appetite has supported performance so far this year, which was prompted by changes in global monetary policy. We are now focussing on market, macroeconomic and political developments as key drivers of asset prices ahead.