Should We Take Notice of the January Effect?

There have long been claims that markets are influenced by what is known as the ‘January effect’ – the notion that share prices act more bullishly in the first month of the year. While this impact has been challenged in recent years, it forms part of a wider group of theories that suggest that certain times of the year are better (or worse) to invest than others. So, with markets’ strong start so far this year, should we be increasing equity market exposure in our portfolios?

The January effect has a long history. Research conducted by Rozeff and Kinney (1976)1 found that from 1904 to 1974 the average monthly return in January was 3.5%. This compared to 0.5% for other months of the year.

The reasons for the disparity were largely anecdotal. The rise in share prices in the US was historically attributed to factors such as the effect of tax-loss harvesting in December (where investors sell losing investments to offset capital gains), people investing their work bonuses and fund managers buying into stocks that had performed well for the year so their portfolios would look more attractive.

A just as likely cause, however, is a renewed sense of optimism in January: New Year resolutions may prompt individuals to invest for the future if they have not already started. Or to invest more. Researchers also noted that the so-called effect was more pronounced in an index of smaller-cap firms.

However, our analysis shows that the January effect may have lost its halo in the modern age. In fact, figures that chart the number of months that have produced positive returns from the end of 1986 to December 2017 reveal it has been a middling laggard over this period for both UK and US stock markets.

In the month by month analysis, December, October and April were the months that consistently produced the most frequent positive returns for the FTSE 100 index. January falls around the middle, too, when it comes to average returns broken down month by month.

What does it mean for the rest of the year?

A related adage about the January effect is that a good opening month bodes well for the rest of the year. Given that the first week of January has been a strong one, should we expect good performance from February onwards? Our analysis suggests that this is just as flawed, as there are only marginal differences between the average returns witnessed following good and bad markets.

When there has been a positive return in January, the FTSE All-share Index was also positive in February through December 76.5% of the time. When January posted a negative return, the index still delivered a positive result 71.4% of the time – a pattern that was closely replicated on the US stock market.

The bigger picture: the ‘Calendar effect’

The January effect is just one of a number of instances throughout the year loosely assembled under a banner called the ‘Calendar effect’. This speculates that market returns can be seasonal, as during certain times of the year – whether a day or a month – markets are believed to do better or worse than others.

Again, much of this is anecdotal and thrives on investor psychology. Fears about October abound (because of Black Tuesday and Black Thursday in 1929, and Black Monday in 1987) but these worries are not backed up by data. October has posted 23 positive months since 1986, second only in the monthly rankings to December.

There are numerous other examples: the Santa Claus rally, the effects of St Leger’s Day (sell in May and go away), the September effect, the Monday effect (where Monday’s trends are said to continue from Friday’s) and so on.

While some are backed up by supporting statistics (particularly, June and September appear to be poor months to invest, posting median returns of -0.78% and -0.21% respectively), crucially, to take advantage of these supposed effects requires you to be able to time the market – knowing exactly when to dip in and out – to perfection. Notably, the weak markets of June and September are followed by much better median returns in July and October, highlighting the risks involved. Therefore, investors who try to time the market habitually lose out.

In our view, looking for calendar effects in this way is an example of mistaking correlation for causation. It is a common pitfall for investors desperately hunting for any route to produce market-beating returns, and end up linking events which really have no bearing on each other. There are plenty of examples that explore this folly in behavioural finance textbooks and beyond. Taken to extreme, this can be quite entertaining, as seen in the example below from military intelligence analyst Tyler Vigen: 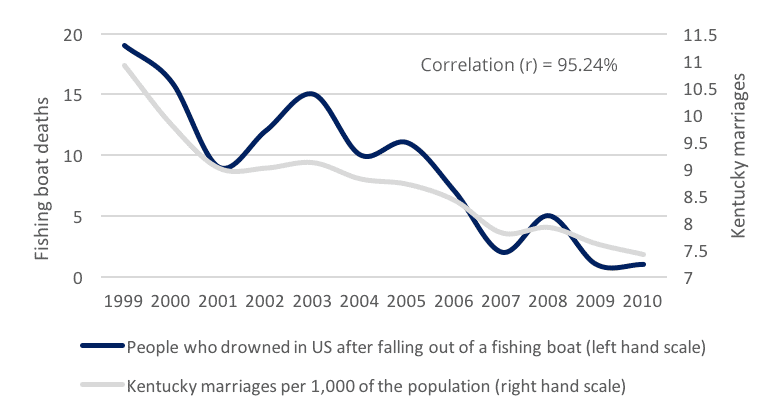 To be effective, ignore the effects

Various research concludes that trying to time the market will result in much less capital gains over time. A leading study by Dalbar associates found that in the 30 years to the end of 2016 the average US investor received a return of 3.98% a year, while the market delivered a return of 10.16% per annum.

By succumbing to the effects of overconfidence, pessimism and noise in the markets investors – who tried to move opportunistically in and out of markets – accepted less than half the returns associated with staying invested and the power of compounding.

“It’s always best to avoid knee-jerk reactions to events that briefly affect the market or those perceived to have the potential to do so,” says Netwealth’s Head of Advice, Matt Conradi. “To meet your investment goals, consider a strategic approach to portfolio construction and understand the damage that short-term measures could have on your long-term portfolio value.”

Calendar effects and trends come and go. As responsible stewards of our clients’ capital we urge them to ignore fashions and temporary peaks and troughs in the market and instead look to the lasting benefits of staying invested.