The Unorthodox Teens: A Review of the Decade

The “unorthodox teens”. This is one way to describe the decade that is just drawing to a close. The beginning of the decade was marked by considerable economic uncertainty, largely because of what had just happened. The first decade of this century had already witnessed the end of the ‘Great moderation’. That was followed by the ‘Great crash mark 2’ in terms of the 2008 Global Financial Crisis and then the ‘Great recession’ of 2009, when the global economy contracted for the only time since the Second World War. Yet few view that decade as Great.

While decades provide a good historical context, they do not always fit easily into economic categories. Sometimes it is social trends that capture the story of the decade, as highlighted by the Swinging 60s or the Roaring 20s.

Even when a decade is characterised by economic drivers – such as the 1930’s depression in the US, it may not be the same everywhere. Indeed, often overlooked, the 1930s were a period of relatively good economic performance in the UK. And as is the case with this last decade, reflecting diverging global trends.

Over the last decade, across the globe the economic performance in western economies can be differentiated from that elsewhere, led by China, whose economy doubled in size (in real terms after allowing for inflation). The teens have seen further evidence of the shift in the balance of power, with more of global growth emanating from emerging economies. Their stronger performance has contributed to steady global growth rates for the decade.

This, however, disguises a very different picture for western economies. For them it has been a case of adjusting in the aftermath of the global financial crisis, with long, slow recoveries. These might be seen as unorthodox by historical standards, although what one might have expected after a financial crisis. This summer, the US economic growth cycle became the longest on record. 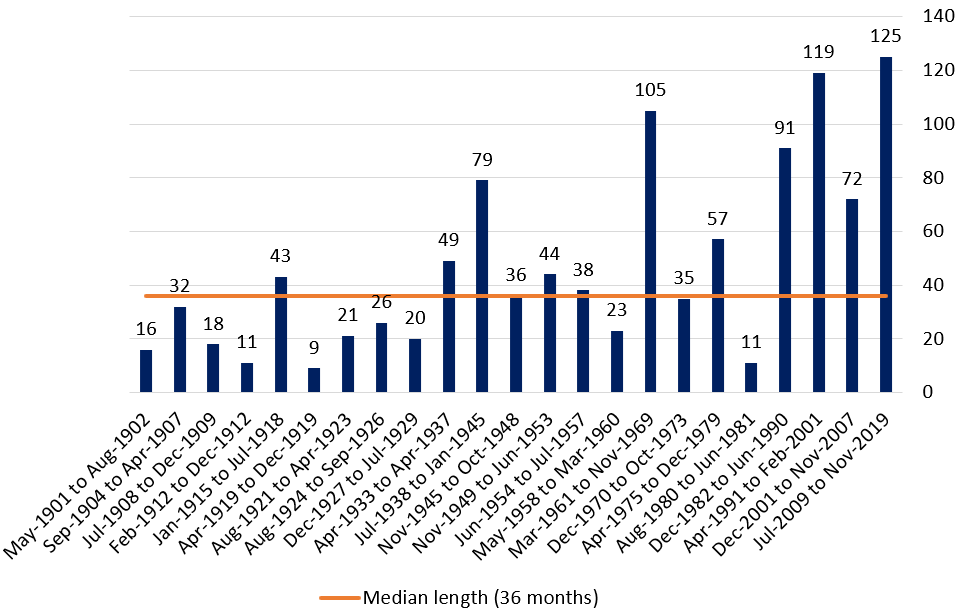 The UK’s recovery, too, has been long and slow. Of the 39 quarters so far in the decade, the economy has only shrunk in three: in the second and fourth quarter of 2012 and the second quarter of 2019. Looking back at the data, however, does not tell the full story.

The decade began with considerable uncertainty, and there was a fear of a triple dip recession, the data then showing the economy had already suffered two dips in the aftermath of the 2008 crisis. In the event, new data led to the initial recession to be seen as deeper and longer, the second dip thus disappeared and the fears of a third dip that marked the start of the teens was gone.

Just as growth has been low, so too has been productivity growth. This was in sharp contrast to the period ahead of the financial crisis. We finish the decade with it widely acknowledged that it is now more important than ever to address the UK’s low productivity.

Over time, productivity helps determine an economy’s longer-term performance and high productive economies have higher output and living standards, being able to work less, or pay ourselves more, or both. We need to see higher investment and innovation as part of the process to achieve this.

While output has been modest, a strong positive has been the unemployment trend. After peaking at 8.4% in December 2011, following the legacy of the global recession, the unemployment rate has since fallen steadily, to its current 3.8%. However, intense competitive pressures, at home and from overseas, has contributed to modest wage growth.

It is only recently that wage growth has trended higher, helping underpin consumption. However, the decade also witnessed two sustained periods of a squeeze on real incomes and personal consumption as inflation rose temporarily in response to sterling depreciation.

Sterling fell both in the wake of the 2008 global financial crisis and also following the 2016 Referendum. As a result, UK inflation experienced twin peaks during the decade. It peaked at 5.2% in September 2011, contributing at that time to a ‘cost of living squeeze’. Inflation subsequently peaked at 3.1% in November 2017. In between it reached a low of -0.1% in August 2015. For the decade as a whole, though, inflation averaged 2.1%, not far from its 2% target.

Unorthodox has been the hallmark of macro-economic policies over the last decade. Against this economic backdrop, monetary policy has been the shock absorber for the global economy. For the UK, policy rates have not moved much but they have stayed low, starting the decade at only 0.5% and staying there until being cut to 0.25% in 2016 and then rising to 0.5% in 2017 and 0.75% in 2018.

The Bank of England, too, shared in other proactive measures such as quantitative easing (QE). Overall, as we have said previously, monetary policy globally can be thought of as synchronised, sizeable and successful in the aftermath of the problems of 2008. Perhaps, not surprisingly, markets have reacted well to this approach. Ten year gilt yields began the decade close to 4% and have trended down, following an erratic path, and although off their lows, are only 0.76% now. The FTSE 100, meanwhile, has risen from 5,412 to close at 7,525 on December 17.

Fiscal policy has occupied central stage over the last decade. The budget deficit peaked in 2009-10 at £158 billion, or 10.2% of national income. It has trended down since. Part of the challenge in the UK has been that in good times the economy has not run budget surpluses and so since 1970-71 there have been only six years of surplus.

Thus, when the economy was hit and the budget deficit rose, fiscal policy became geared to bringing the budget deficit under control. This could not prevent a ballooning of the national debt, and also led to a political focus on the costs of austerity. This figured prominently as an issue in the first three of the four elections of the decade in 2010, 2015 and 2017 but by this year’s election the attention, quite sensibly, was on taking advantage of low bond yields to justify future infrastructure spending and help to both level up and reboot the economy.

The role of unconventional politics

Whereas the last years of the 2000-09 decade were characterised by an economic and financial crisis, the final years of this decade witnessed political turmoil, unorthodox by recent historical standards. The most significant event was undoubtedly the June 2016 Referendum, and the vote to leave the EU.

Of the 12 regions of the UK, three voted to remain (Northern Ireland, Scotland and London) and nine to leave (Wales and the eight regions of England outside of London). This regional breakdown, too, helps explain much of the political debate and turbulence since.

The aftermath of the Referendum and three elections in four years (2015, 2017 and 2019) reflected a period of historic political turmoil that appears to have been finally resolved by the emphatic Conservative general election victory in the last month of the decade. The UK will now leave the EU, although worries about the union within the UK may persist.

We end the decade, with a focus on whether the newly elected government will be able to achieve economic success and political stability. This will require a good future relationship with the EU and also addressing our domestic agenda and positioning the UK to succeed in a changing and growing global economy.

Who knows, but in ten years’ time we may be talking, again, about the roaring twenties.