Why a Change from RPI Should be Considered

What is the most appropriate inflation measure to use in gauging returns on investments and savings? That is the issue we address here. There are many different benchmarks that investors and savers can use, but a common one is to earn a return in excess of inflation.

Many measures of inflation

Because various measures may be used for different outcomes, there is unlikely to be complete agreement on the inflation index to use.

This makes the construction of the inflation indices that are used very important and helps explain the debate in recent years about whether pension providers should use the Consumer Price Index (CPI) or the Retail Price Index (RPI). There has been intense pressure – led by the statistical authorities and supported by the bulk of economists who comment on this – for the CPI to displace the RPI in everyday use, including for investment decisions as well as pension calculations.

The difference in inflation measures

The RPI used to be the common measure used to measure inflation, and was widely accepted. In 2003, however, the CPI became the effective measure used for economic policy1, and the Bank of England’s 2% inflation target is based on this. If policy – which in turn heavily influences financial market behaviour – is based on a particular measure, it would seem sensible for those looking at such markets to use the same benchmark in their planning.

The table below summarises the difference between the CPI and the RPI, as well as the Household Costs Index (HCI), another inflation measure introduced recently. They are constructed using different statistical formulae, and while there is overlap in their components, these vary, too. The reality is that no one inflation measure best fits all situations.


How much of an impact do these discrepancies really have? Currently, the CPI is rising by an annual rate of 2.4%, the RPI by 3.4%2. The effect can be seen over the long term as well.

The chart below shows their index values, rebased at the beginning of 2009. As we can see, since then the rate of increase in the RPI exceeds that of the CPI. This has a significant impact on payouts, particularly when the compounding effect is taken into account. In fact, the rate of increase of the RPI has been higher than that of the CPI in 24 of the past 29 years, and 11 of the past 12.


This difference in measure of inflation goes back a long way 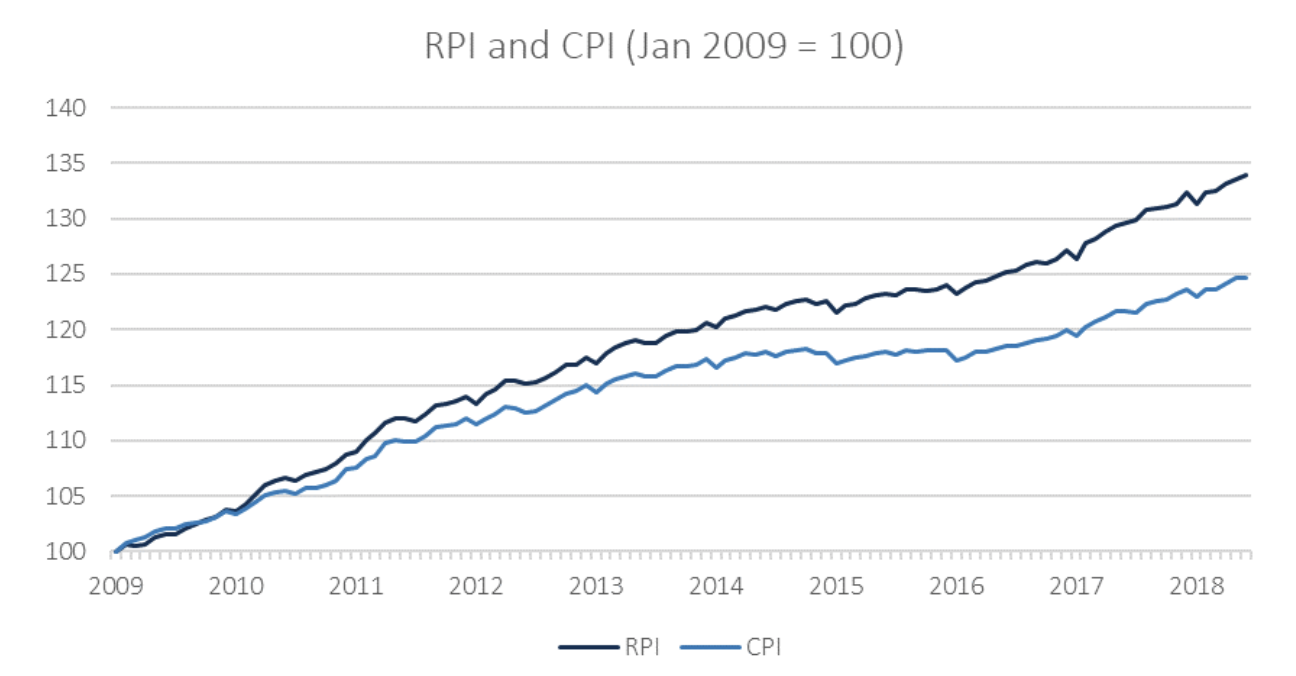 The challenges of legacy issues

In March this year, the Department for Work and Pensions (DWP) released a White Paper, ‘Protecting Defined Benefit Pension Schemes’3. In it, they note that “Presently, 73% of Defined Benefit schemes index their post-97 pension liabilities using the Retail Prices Index (RPI), despite public sector and State Pensions having switched to the Consumer Prices Index (CPI) in 2011. Many schemes will specify RPI as the measure of inflation in their scheme rules, with trustees either unable or unwilling to amend rules to follow CPI.”

So there is a legacy issue. Many schemes have been set up based on the RPI. Also, as the DWP notes, there would be gains to pension providers, but losses to the recipients if there was a change.

The DWP calculate that switching from the RPI to the CPI would reduce the liabilities of defined benefit schemes by £90 billion. “This would result in direct savings to employers, as scheme deficit repair contributions and on-going employer contributions would be reduced.”

However, reducing a scheme’s liabilities by reducing inflation would also have a long-term effect on members’ pension incomes. The example they cite is based on the medium level of private Defined Benefit pension of £8,000 and assuming a rate of increase of 2% in the CPI and 3.2% in the RPI. Over a three-year period, the shortfall, based on these precise but seen as typical assumptions, would rise from £96 in the first year to £197 in the second and to £303 in third. Based on the RPI the recipient could receive £8,793 after three years and based on the CPI, £8,490.

In this case, one can understand why many investors and pensioners would prefer to link their investments to a benchmark based on the RPI. This, it is felt will deliver higher returns. But it is indicative of the challenge. Many of these issues came to a head in a court case at the end of last year, involving the BT pension fund, where the judge sided with the pensioners against a change4.

He made the strong point that for those who are existing pensioners there would not appear to be a strong case to change, yet even in reaching this, he too concluded that there are many arguments against the use of the RPI in the future. We would agree.

For new pensions, a strong case in favour of the CPI

Legacy issues and continuity are important and so suggest – as in the BT case – for existing recipients and pensioners it may be unfair to change. But for those starting afresh, the case in favour of the CPI over the RPI would appear to be strong.

There is a clear statistical case against the RPI. In fact, the UK statistical office has downgraded the RPI’s importance and it is no longer a national statistic. Indeed, highlighted by the judge in the BT case, the problems with the RPI have existed for some time and that, “RPI failed the axiomatic test had been known for a long time, and certainly since before 2002”.

This bias is known as the ‘Formula Effect’, and it is a problem which has recently been exacerbated; changes to the method of collecting data for clothing prices, introduced in 2010, have significantly increased the upwards bias of the RPI.

The CPI may, it seems, underestimate inflation5 but by far less a degree than the RPI overstates it. If both measures had the same components then the strong likelihood is that the arithmetic mean would be higher. There have been attempts to work around this, for instance using a different approach and moving away from using the Carli6 formulae, on which the RPI was based, to the Jevons7 approach. But even this has failed to win over the statisticians.

Considerable variations over time for funds

If a fund was seeking a return versus inflation, then the variations over time are considerable. For instance, if the target was inflation plus 3% then from the beginning of 2009 to the end of the 2017, portfolios using the RPI as the reference index would have needed to generate an extra 12.4% return than if it were referencing the CPI.

Likewise, based on an inflation plus 5% target, the extra required return is close to 15%. The discrepancy is due not only to the overstatement of inflation using the RPI, but also the compounding effect. In a future environment where yields may be low, as in the recent past, the strains this may place on investment managers, incentivising them to take unnecessary risk to meet higher benchmarks, may intensify.

To recap, the main arguments against the RPI are:

This raises the question of whether the discrepancy will get worse, not better. The UK authorities charged with oversight of statistics have publicly described the RPI as a flawed measure of inflation and strongly discouraged its use, leading to its replacement by the CPI in some instances.

Statistical arguments, but also an economic case to consider

While statistical arguments against using the RPI appear compelling, there is also an economic case to consider. But here it is more nuanced. The RPI is household focused, while the CPI is based on the national accounts, and is thus more inclusive of the whole economy. The CPI is also seen as more internationally comparable, although the reality is that many countries, Germany being one example, use a different domestic measure of inflation to the one that may be used to compare them with other countries.

The direction of travel, moreover, points to the RPI becoming less important. Business rates were moved from being based on the RPI to the CPIH in November 2017. But like all inflation indices, particularly at a time when house price inflation or asset price inflation is high, and wage growth is sluggish, there will be criticism that they are not capturing all the relevant items.

This criticism is compounded, given that many items are still linked to the RPI, including payment on student loans and rail fares as previously discussed, but also the coupon payments for the £320 billion index-linked gilt market, where some of the outstanding bonds will not mature until 2068, suggesting a challenge in moving away from a measure based on RPI.

A gradual shift is preferable

Given this, the current position is that there is a general call for a review of inflation measures. The RPI, despite the benefits of continuity, is no longer seen as fit for purpose. The CPI or CPIH – where the latter includes housing costs – have gained in attraction. Also, a new measure, called the HCI, as shown in the table, has been suggested. It would seem that there is a strong case to evolve to a more widely accepted statistical and economic measure.

An overnight change is difficult at the national level; instead it makes sense for an evolution, particularly as a host of existing contracts are linked to the RPI. It would seem that these should move to the CPI but that this should be done gradually, with a specific future date set for the change to take effect. It will take time, as different stakeholder groups may need to be engaged.

No inflation measure is going to capture all things; the statistical case against the RPI appears strong, but ensuring a smooth transition is the challenge. If this is likely to happen, then it makes sense for pension providers and others to anticipate this change and to make adjustments when appropriate and sensible to do so.

1 The HICP replaced RPIX as the inflation target and then HICP was renamed CPI.
2 Source: Office for National Statistics.
3 Department for Work and Pensions, Protecting Defined Benefit Pension Schemes. Presented to Parliament by the Secretary of State for Work and Pensions by Command of Her Majesty, March 2018 Cm 9591.
4 The court case referred to here was BT pensioners versus BT and took place in December 2017 at the Royal Courts of Justice. It received much coverage, but this was a good description by Simon Briscoe, one of the expert witnesses involved.
5 As noted, the various measures of inflation have different components. The CPI excludes owner occupied housing costs, and because it is based on macro-economic principles, also excludes some other items that might be included in a household measure of spending, such as insurance, licence fees and some taxes, all of which can at times increase significantly in price. Thus, it is possible, and it has sometimes been argued, that CPI may understate inflation.
6 The Carli method involves taking the arithmetic mean of changes in price of the various items sampled. The arithmetic mean is calculated by adding the data points up and dividing by the number of data points.
7 The Jevons method involves taking the geometric mean of changes in price of the various items sampled. The geometric mean is calculated by multiplying the data points together and taking the nth root, where n is the number of data points.